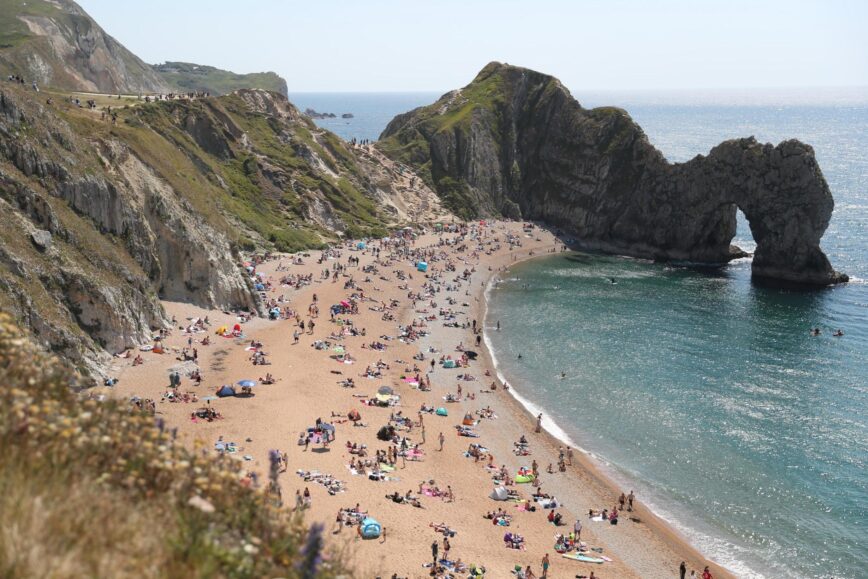 FOLLOWING the distressing incidents at Durdle Door over the weekend, the leader of Dorset Council has written to the Prime Minister calling for travel restrictions to be reintroduced.

Huge crowds descended on Dorset beauty spot over the weekend, where three people sustained serious injuries after tombstoning from the top of the cliff.

Two helicopters landed on the beach to treat the casualties, resulting in hundreds of people being forced together in a crowd in the centre of the beach and sparking major concerns about the lack of social distancing

Cllr Flower said: “Over the weekend we have seen some extremely disappointing behaviour from visitors to Dorset’s beaches. I am acutely aware of how worried and upset many Dorset residents feel about the current situation, particularly when so many of them complied fully with lockdown guidance and when the Dorset Council area had one of the lowest COVID-19 infection rates in the country.”

The owners of the beach officially closed it the following day and closed the car parks. But hundreds still turned up and there were a few idiots who continued tombstoning, fortunately without harming themselves.

The full story and Cllr Flower letter to Boris Johnson can be seen elsewhere on this website under Dorset news.

There are many in Lyme Regis who will share Cllr Flower’s fears after a weekend which saw hundreds enjoying the main beach in the glorious weather. To be fair, as I reported in yesterday’s blog, some attention was given to social distancing.

The big issue was the gathering of a number of young people, many of them worse for wear, whose behaviour left a lot to be desired.

Having been hauled over the coals again yesterday by the Facebook crowd for referring to one group as foreign, I’m not going to elaborate here, other than to say I appreciate their argument, but Lyme needs to decide what kind of resort it wants to be and one which attracts the “stag night” mentality is certainly not it.

Trotting out the Dominic Cummings-excuse for getting out and about is not acceptable. That, I’m afraid, is yesterday’s story.

Boris Johnson may have been annoyed by the actions of his chief advisor but it is clear he will not be dispensing of his services any time soon. According to certain sections of the press, Cummings might stand down of his own volition in about six months’ time.

I don’t think the Prime Minister will change his mind about the travelling restrictions but it appears some consideration may be given to reducing social distancing to one metre.

Greg Clark, who chairs the Commons science committee, has written to the Prime Minister urging him to relax the two-metre rule.

He said: “Unless we ease the two-metre-rule, the hospitality industry is likely to stay close.”

That would certainly help the hospitality trade and enable the smaller outlets in Lyme, such at the Volunteer or Nag’s Head, a chance of reopening when permission is given and retaining hope of staying in business before a vaccine finally allows business to return to normal.

I saw some interesting stats regarding social distancing. If you take no notice of it at all, you have a 13% risk of infection. Keeping to one metre apart the risk drops to 2.6% and at two metres it falls to 1.3%.

Whilst the big argument revolves around the sense of coming out of lockdown quicker than many expected, the good news continues to encourage the government that they are getting on top of this virus. The UK death toll rose by just 111 yesterday, the lowest daily increase since the lockdown began on March 23.

More than half the hospital trusts in England reported no deaths over 24 hours.

In this part of the world we have less deaths in any other region and in Dorset there has been only one death in the last month. For that we should be thankful.

It was Cicero who said: “A thankful heart is not only the greatest virtue, but the parent of all the other virtues.”

Lyme Regis beach hut goes up for sale for whopping £50,000

LYME Regis continues to prove itself as one of the most popular holiday destinations in the UK, with one of its much sought-after beach huts going up for sale for a whopping £50,000. […]