HAVING spent £650,00o on resurfacing, the spotlight is very much on how Lyme Regis Town Council deal with the future use and protection of the flat roof at the foot of Lister Gardens.

The fact of the matter is that resurfacing of the roof – over the top of the Amusement Arcade, Antique Centre and SWIM restaurant and bar – should have been carried out many years ago when the cost would have been much less.

But it’s too late to argue about that now.

Foremost on the mind of town councillors is what should – or should not – be allowed on the roof which in recent times has been used to accommodate food festival stalls and other forms of entertainment.

One very popular use has been the showing of films with the audience using the sloping Lister Gardens as a viewing area.

Although it’s difficult to believe when you look at the site that motor vehicles could access the roof, negotiating the very steep bank, that’s exactly what has caused much concern in recent times.

Now that the council has spent so much of taxpayers’ money on the new surface and smart glass balustrade, it is unlikely the area will be used to accommodate food festivals and certainly there will be a ban on motor vehicles.

The spotlight has fallen on the roof after a six figure sum being spent on resurfacing, but pooling of rain water is still occurring, one of the original reasons for the work being carried out.

Also, not long after the job was completed, a stone from a gardener’s lawn mower broke one of the glass panels which shattered sending glass splinters down onto a family outside the Amusement Arcade below.

No injuries were inflicted but, understandably, it has resulted in councillors asking whether the quality of the glass balustrade was up to scratch.

The matter caused quite a robust debate at a recent council meeting when the Mayor, Cllr Brian Larcombe, said he had seen youngsters skateboarding on the roof and playing football.

His concern was the possibility of a skateboard shooting off the roof and falling to Marine Parade below causing serious injury to a passer-by.

Councillor David Sarson, who has 20 years experience of working in the glass industry, said it was possible to get toughened and laminated glass which, if smashed, the laminate interlay would keep the glass in place within its frame.

He said that laminate and toughened glass panels were installed quite extensively behind the Langmoor and Lister Rooms a few years ago. That begs the question why a similar glass. was not used in this case.

In the end it was decided by the council that the officers should work on a management plan on how the area should be used in future, taking into consideration councillors’ comments on the safety concerns.

Now I’m a good one to talk about using the roof to accommodate events. I was the person, in my role as regatta secretary back in the seventies, who erected the first free-standing marquee on the roof.

We were planning to use the Marine Theatre for all the regatta and carnival indoor entertainment, but at the last moment this was not possible because a new lessee had taken over the premises.

I just happened to be in London and took a girlfriend to the London Fashion Show, which was held in a series of marquees outside the British Science Museum.

These were the first free-standing marquees I had ever seen. They were erected by a company from Swansea and the next day I phoned them to see if it was possible to erect a marquee on the Marine Parade roof.

They visited the site the next week and agreed to do the job. We had a venue which could accommodate 600 people, but I would like to stress we did not take any vehicles onto the roof. Everything had to be lifted in by hand.

More recently, I also arranged for a marquee on the roof to entertain members of the newly-formed Red Arrows 100 Club whose funding generosity paid for the appearance of the Red Arrows in Lyme for two consecutive years.

Again, no vehicles were involved, but we did have problems with people accidentally knocking plastic glasses off the top onto the outside tables at SWIM below.

The area has come into the spotlight again this week with the distressing accident involving a disabled 91-year-old man in a mobility scooter running out of control down over Lister Gardens onto the flat roof, sustaining serious injuries.

Various solutions to put a hedge or a small fence along the bottom of the sloping area have been put forward and I think it is inevitable, especially after this accident, that the council will impose some restrictions on its use due to health and safety reasons.

The Lister Gardens is a magnificent asset to Lyme, it being the main viewing point for crowds wishing to watch such iconic Lyme events as Candles On The Cobb and, of course, the Red Arrows.

The council will not want to prevent the gardens being used as amphitheatre but the safety of all has to be the first priority. 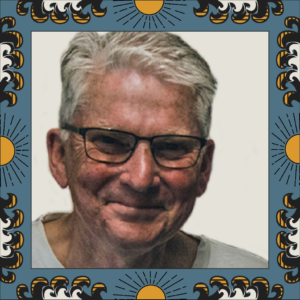 No heavy rock but hopefully a few gems

RADIO is one of my favourite mediums and as a young journalist I was very interested in a broadcasting career.

I contributed regularly to the old Devon Air at Exeter in the days when it was run by the Stawbs front man Dave Cousens.

In the early days local newspapers saw local radio as a big threat to their advertising revenues but Dave and I became good friends and we joined forces for a combined promotion in which we organised a trade exhibition at Axminster which was a great success.

When I went into management I sat on a number of consortiums bidding for local radio station franchises.

The Independent Radio Authority which controlled the licenses always insisted on a high degree of local speech content but within a very short time of being on air these stations almost all reverted to being virtually all music stations with just brief national and news bulletins every hour. So all the local content which was planned and promoted at the application stage rarely came to light.

So I’m delighted that our own community internet radio station, Lyme Bay Radio, is scheduling plenty of talk content alongside the wide variety of music which they broadcast.

And I am even more delighted that this Saturday (April 10) I’m a guest of Neil Charleton’s (pictured left) excellent Bay Lives show on which a local person talks about their life in Lyme, influenced by some music, a bit like ‘Desert Island Discs’.

My music tastes are a bit varied, leaning very much towards swing, so if you’re expecting some heavy rock you are going to be a bit disappointed.

Bay Lives goes out at around 10am if you want to listen in and hopefully we can get a copy of the interview to put on the LymeOnline Sights & Sounds portal.

Council spending expected to be £339,000 over budget

LYME Regis Town Council is expected to be £339,000 over budget by the end of the financial year – but still has more than £1.4million in reserves. […]

IF it wasn’t for the masks, you would think this was like any other summer in Lyme Regis. With the car parks full and the streets and promenade crowded with day-trippers and holidaymakers, some might think it’s heading for a record year. […]