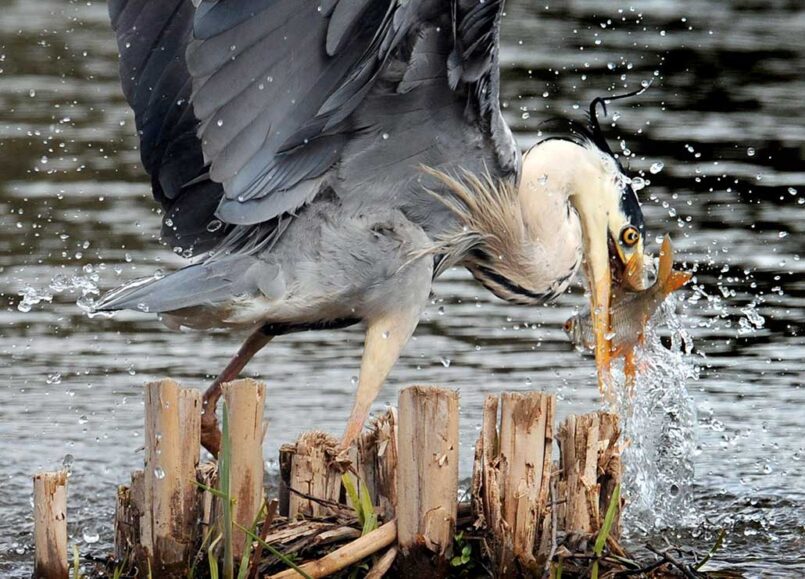 A COUPLE of years ago I got a call from the Nikon PR office. They explained that they were launching a new campaign to persuade selected photographers to switch from Canon to Nikon, I think the campaign was called ‘Back to Black’.

I didn’t show too much interest until Nikon said they would send me a selection of their best camera bodies, lenses and flash system. This also included a 400mm F2.8 lens, bringing the value up to approximately £30,000 worth of camera gear.

I have a 600mm Canon lens and I was keen to compare the two, so I took the Nikon 400mm to Stover Park near Newton Abbot.

I was in the bird hide when a heron crept across the hide about 25 metres away. Its body language let it be known it was about to catch a fish, and as he did this picture was the first image the Nikon lens had captured.

The next morning The Guardian newspaper used it as a centre page spread, Nikon were impressed but I stayed with my Canon equipment.

I did use the Nikon gear for a month, I couldn’t find fault in any item, it was top class photographic equipment.

Photography Duchess was an ‘eye-opening’ experience

AS you get older, the odds of having eye problems because of cataracts seem to shorten, and I speak from personal experience, having had the lenses in both my eyes replaced. […]

SOMERSET-based animal rescue charity, Secret World Animal Rescue, works miracles every day with the endless variation of birds and animals that pass through the charity’s HQ at East Huntspill. […]

Evie’s not an easy eagle to forget

TO come face to face with such a massive eagle certainly wakes you up in the morning. […]