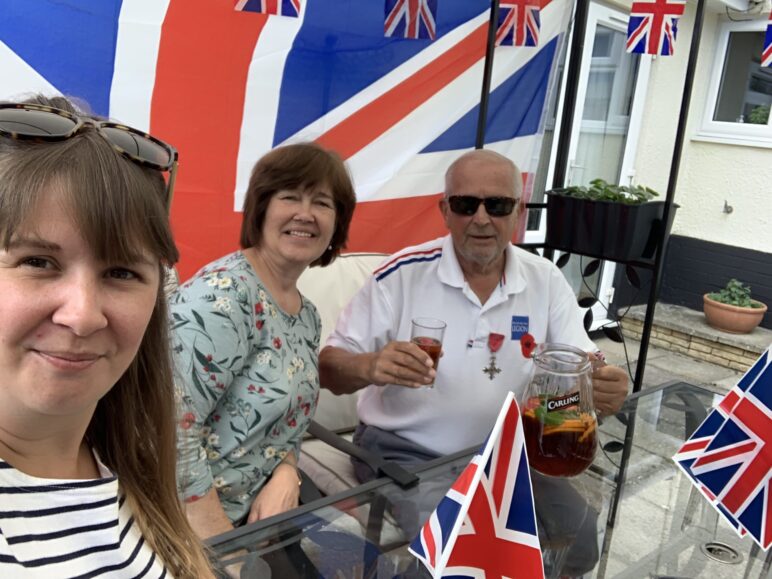 FOR a brief few hours life seemed good again. A party in the garden bedecked with patriotic flags, lots of sandwiches and a cream team, numerous jugs of Pimm’s – and a good old sing-song.

Who could ask for anything more? Hang on minute. But it was just the three of us trying to let our hair down and pretend that life was sweet again.

Like many other lockdown families in Lyme, Uplyme and Charmouth, we were determined to mark the 75th anniversary of VE Day in some form or other.

Duties were shared between the three of us. Francesca decorated the garden with flags and a huge Union Jack and provided the music; Jackie prepared a lovely tea; and I made the Pimm’s, far too strong as usual.

It was just what we wanted. To be honest, it was just what we needed. Last week was a bit tense to say the least. Due to unprecedented demand, we experienced real problems with the LymeOnline website and our social media platforms. Such is the popularity of this website.

It all came right in the end and we were able to forget our troubles after a few glasses of Pimm’s, determined to pay our own modest tribute to those who had put up with so much during the Second World War.

In no time at all we were dancing to those lilting Glen Miller melodies, so evocative of war-time, and before we new it we were videoing our antics and sending them to our other children. Their response was less than enthusiastic.

Later, we listened to the Queen’s speech and stepped outside our front door to sing ‘We’ll Meet Again’. Alas, no one in our road was joining in. Too shy perhaps? Or were they out back?

It made me think that if this was 50 years ago everyone in the road would have been celebrating. Back then we knew everyone in Anning Road, our back doors were always open and we relied on each other to get through the woes of life. It’s not quite the same but, nonetheless, we have good neighbours and we have to be thankful for this.

Other roads in town were clearly celebrating with more volume, especially in King’s Way and Queen’s Walk where they were having a whale of a time. Sound systems were set up all over the town but being down in the valley they were not too audible.

Villages tend to be more community minded and that was certainly case in Charmouth where Vera Lynn’s most famous war-time ditty was sung with great gusto, the music being provided by The George landlord Dean Herbert.

If you go to the homepage of this website you will see we have posted a video with a montage of many of the events and celebrations, including the Charmouth rendition of ‘We’ll Meet Again’. Thank you to all those who sent in their video clips and photos. We will be carrying a page of pics in next Friday’s LymeOnline digital version.

I think the fact we were able to forget our current worries about coronavirus and mark this most historic day in our country’s history has done a great deal to ease the mental strain that many our experiencing. I know I went to bed last night not feeling quite as gloomy as normal.

One good thing was that the national VE Day 75 celebrations knocked coronavirus off the front page. There was no a mention of the pandemic in my daily paper until page 10 which was a blessed relief.

All eyes are now on Prime Minister Boris Johnson who will be addressing the nation from Downing Street at 7pm tomorrow. He has indicated that there might be some minor relaxation of lockdown measure to help kick-start the economy as there is in other European countries.

But don’t get too excited, these are not going to mount to much. He can’t take the chance of a second epidemic.

Press speculation is that garden centres might be allowed to reopen, which I think is a good thing, on the condition that social distancing is strictly controlled, similar to the supermarkets and DIY stores. Cleaners and one-man operators like plumbers are being encouraged to return to work.

With the scientific advice still a bit sketchy on the advisability of wearing face masks, Boris may well still come down on the side of wearing them when out of doors and especially when travelling on public transport.

He may also relax the number of times we can take exercise and allow us out of captivity for more than once a day, a move I definitely agree with as I’m getting a bit fed up with just my early morning walk along the prom.

There can only be one way to conclude today’s diary and that’s with a quote from the Queen from yet another inspirational speech given at the same time 75 years after her father, King George V1: “Our streets are not empty; they are filled with the love and the care that we have for each other. And when I look at our country today, and see what we are willing to do to protect and support one another, I say with pride that we are still a nation those brave soldiers, sailors and airmen would recognize and admire.”

THE Town Mill in Lyme Regis has been adapting to a new way of life during the coronavirus lockdown.  […]

More than 100 coronavirus cases in Dorset