HOPES of preserving the ancient Guildhall have been raised as our proposals to protect it from large vehicles have won vital support.

The window of the Grade II listed building is struck on a regular basis by large vehicles and there have been 12 collisions, we know of, since March 2017.

Having repaired the window in January, it has been hit twice since then.

Due to concerns the structure of the entire building is being put at risk by these collisions, we have been trying to find a solution for many years.

These measures have included installing bollards, which have proved ineffective, requesting further signage to prevent large vehicles driving through the town, requesting a traffic regulation order to restrict vehicles of a certain size, and requesting amendments to satellite navigation systems.

As these measures have failed, we are now progressing proposals to reduce the projection of the window to give large vehicles more room to negotiate the turn.

This is a drastic solution but it’s the only option we have left and we have employed a heritage consultant to put a case together to support the alterations, in order to preserve and protect the rest of the building.

The experts believe reducing the projection is the best option as it retains the window in-situ and preserves the intrinsic character and appearance of the listed building.

We recently met at the Guildhall with Historic England and listed buildings officers from Dorset Council, who understood our concerns and were supportive of the proposals.

With their backing, we are now progressing to make a full planning application to alter the projection of the window by nine inches.

It is vital this planning application has the support of the local community to demonstrate the importance of this historic building to the town.

When the planning application is submitted, we would urge everyone in the community to submit a supporting comment to the planners and these details will be publicised when the time comes.

Share your ideas on how council can engage with the community

HOW do you think the council could better engage with the local community and be more open and accountable?

We’re beginning to formulate a community engagement strategy with the aim of getting local people more involved, to ensure residents are better informed, to help develop stronger relationships with the public and local organisations, and to help inform council decision-making.

The council has its own ideas about how these aims could be achieved but we’d also like to know how the public would like us to involve the community more.

The ways we currently connect with the community include via our social media pages, our new website, the local survey group Lyme Voice, and even this monthly newspaper column.

We recently held a public consultation about our objectives over the next five years, which included an open day, and the public is welcome to attend meetings of the council and its committees, which take place almost every week.

The council recognises the community has a central role to play in influencing and shaping what it does and councillors are mindful that it is the local residents who elected them to their positions.

It’s therefore important residents understand and trust the work of the council and there is a mutual relationship between the two, so we’re all working together for one aim – to make Lyme Regis a better place to live, work and visit.

If you have any suggestions about how to improve engagement, please get in touch at admin@lymeregistowncouncil.gov.uk 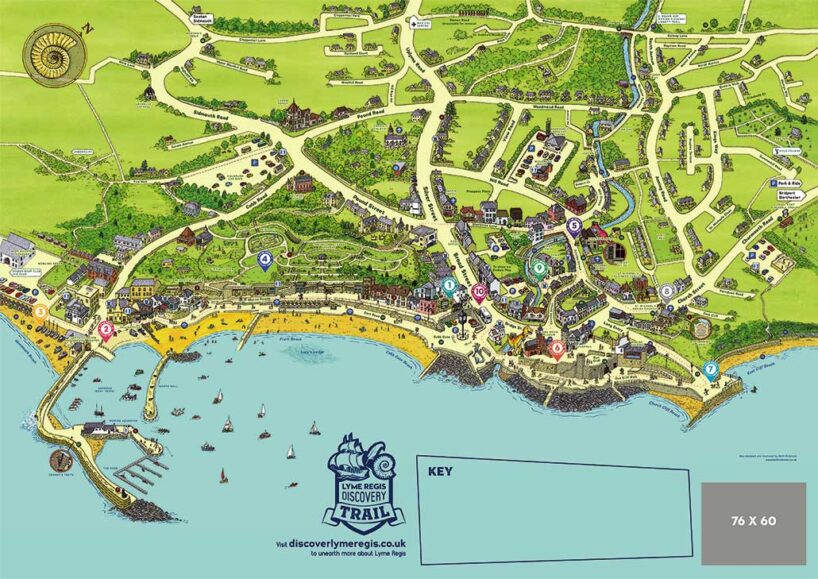 WE’RE about to launch an exciting new town map and interactive discovery trail around Lyme Regis.

The council decided to no longer produce a traditional holiday guide for the town and to replace it with this new map and trail.

Local artist Keith Robinson has designed the beautifully illustrated map, which can also be found on a much larger scale at Bell Cliff.

The map has been updated and will also include a walking trail around Lyme Regis, taking in 10 key areas of the town and adverts from local businesses.

A website – and later an app – will accompany the trail, so visitors can watch a video and find out more information about the main attractions and historical and cultural sites. 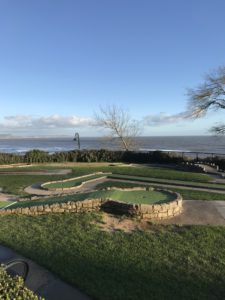 Mini golf course given a revamp

THE mini golf course has been given a much-needed revamp – although wet weather this half term has prevented much play.

The worn and uneven felt carpet at the Lister Gardens course has been replaced with astro turf.

It runs slower than the old course and keen mini golfers may like to try their hand at beating the course record.

The refurbishment has been paid for by section 106 funding from the former West Dorset District Council, which was ring-fenced specifically for play areas.

We’ve made good use of this funding, having spent the majority on refurbishing Henry’s Way play area, with enough money left to put an extra piece of play equipment in the toddler area at Anning Road play park in the near future.

Our thanks to Dorset Artificial Grass for completing the work on the mini golf course for the half term, despite rain calling off play most days.

THE council is now inviting applications for community grants of up to £1,000.

We have up to £20,000 available in 2020/21 to award to local organisations for capital projects that help and support the community.

Grants can be used for the purchase of materials and equipment, or the provision of a service that is of benefit to Lyme Regis. The grants fall into two further categories: projects up to £500 and projects up to £1,000.

Projects over £500 require 50 per cent match funding of the total project cost and more supporting documents.

The deadline for applications is 5pm on Monday, March 9 and they will be considered by the council at a public meeting on Wednesday, April 8. See Public Notices for more details.

THE next 11 beach huts will be sold off in March to make way for new ones on the seafront.

The council is replacing the Cart Road beach huts over three years and is selling the old ones at a discounted rate.

Last year we sold the first 12 for £50 each and the response was overwhelming, with all 12 gone within eight minutes.

This year we’re offering 11 huts for the same price and they will be available to view at Woodmead car park from Tuesday, March 10 to Sunday, March 15.

But be quick, we’re expecting them to sell as quickly as last year!

PLANS have been submitted for an industrial-style building on Monmouth Beach car park in Lyme Regis, to provide storage for the harbourmaster and local fishermen.  […]

Guitars On The Beach called off due to COVID restrictions

GUITARS On The Beach has been called off for the second year running due to the difficulties of staging the event in line with COVID restrictions.  […]