ARE you passionate about the community of Lyme Regis? Do you want to help make a difference to local people and services? If so, you could make a great town councillor and now is the time start thinking about standing for election.

The local elections for both town/parish councils and the new Dorset Council take place on Thursday, May 2 and we’re encouraging residents to consider becoming a town councillor.

As a councillor, you can become a champion for the community and make a real change, giving residents a voice on the decisions the council makes.

There are 14 seats on Lyme Regis Town Council and they are all up for grabs in the May election. We’re looking for people with a range of skills, knowledge and experience to help the council become truly representative of the community it serves.

The services the town council delivers include car parks, public toilets, beach hut hire, the cemetery, two play areas and a playing field, the town bus, and park and ride.

Major projects in this council term have included the refurbishment of Marine Parade toilets, a new skatepark, a new play park at Anning Road playing field, installation of free public wi-fi on the seafront, showers on the beach, and beach wheelchairs.

To stand for election, you must be:

So what is actually involved in being a town councillor? Councillors put aside, on average, three hours a week for council work, but it is entirely up to the individual how much time is dedicated to the role.

The job involves attending meetings and events, engaging with residents, speaking on behalf of the council to other bodies, and representing the council at civic functions.

Working as a councillor is entirely voluntary, but members of Lyme Regis Town Council can claim an allowance of £40.75 to cover costs associated with the role. The term of office is usually four years, but due to the creation of the unitary Dorset Council, the next term of office will be five years.

Still interested in becoming a local councillor? You’ve got until 4pm on Wednesday, April 3 to make up your mind and submit your nomination form.

We’re also running two open events on Monday, March 4 for prospective candidates to find out more about what being a councillor really involves, the election process and the work of the council.

These will be held in the Langmoor Room in the Marine Parade shelters from 11am to 1pm, and from 6pm to 8pm. You can also contact the town council office on 01297 445175 or enquiries@lymeregistowncouncil.gov.uk, or visit www.nalc.gov.uk/elections 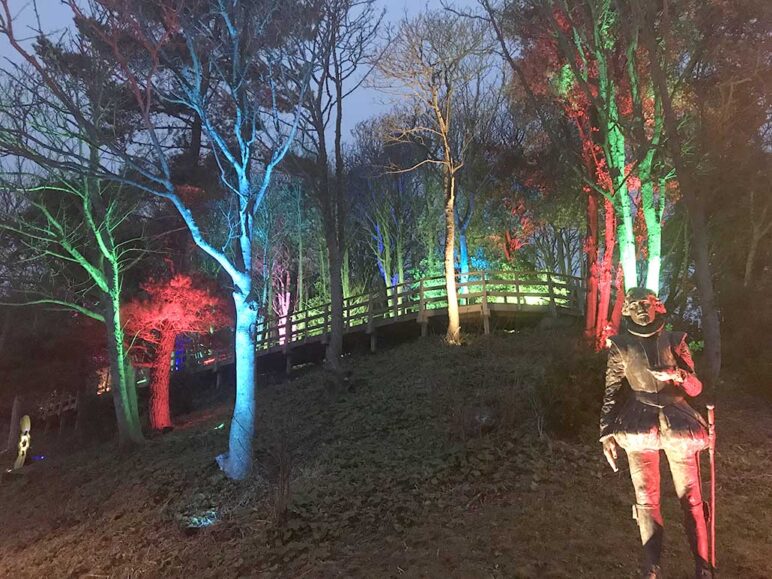 Lighting up the gardens

THE seafront gardens were lit in an array of colour this week in a sneak preview of an enhancement project we’re working on.

Councillors were given a demonstration of how the Langmoor and Lister Gardens might look when a major new lighting scheme is put in place. The demonstration was by Lymelight, the team behind the illuminations at Abbotsbury Subtropical Gardens.

The town council has been awarded funding from West Dorset District Council to help pay for the scheme, which will draw out key features of the gardens and illuminate pathways and points of interest.

The picture shows the statue of Admiral Sir George Somers and the woodland walk lit up and we were all really impressed by how striking it looked.

CELEB-SPOTTERS may be able to catch a glimpse of Hollywood stars Kate Winslet and Saoirse Ronan when they film a movie in Lyme Regis next month.

The A-listers will star in ‘Ammonite’, a film exploring a fictional romance between palaeontologist Mary Anning and another woman.

Filming will take place over two weeks in March from various locations in Lyme Regis, including Bell Cliff, Monmouth Beach and the Cobb.

The locations will be transformed by elaborate sets and props to resemble life in the 1840s. This will include building a fake stone wall to hide the bus stop at Bell Cliff, a two-storey fake Georgian house front to cover a Broad Street shop, and ground coverings to hide tarmac pavements.

Modern additions such as drainpipes, alarms, signs and railings will be temporarily removed or disguised.

The town council is supporting in various ways, including allowing access to our land, reserving parking spaces, and providing rooms for the cast and crew to base themselves during filming.

When the 1981 film, ‘The French Lieutenant’s Woman’, was filmed in Lyme Regis it had an immeasurable impact on the town and its tourist trade, and it’s hoped this latest blockbuster will provide a similar boost to the local economy.

Helping to keep our fishermen safe

WE’RE delighted that local fishermen will this week take delivery of new equipment to help keep them safe at sea.

A PLB is a portable transmitter which is registered to an individual and sends out an emergency distress signal, providing their exact location to rescuers.

A member of the association came to a town council meeting in April last year to ask for the council’s support in its funding application. We gave our full support, recognising the importance of PLBs in keeping our local fishermen safe and in turn, contributing to a thriving and active harbour.

Each jacket and PLB costs £400, with three-quarters of the funding coming from the MMO and the remaining £100 being paid by each of the fishermen.

The funding came via West Dorset District Council, and town and district councillor Cheryl Reynolds, applied to the MMO on the fishermen’s behalf.

THE new woodland walk through the seafront gardens is now open to the public. The external works’ team has created a new path through the wood in the Langmoor and Lister Gardens and we think it’s looking great.

There are still some finishing touches to be made, including new signs, information boards and features to attract more nature, but the pathway itself is complete.

When you’re wandering through, look out for our resident pheasant, who we’ve named Philbert!

Former beach huts for sale for £50

A DOZEN seafront beach huts will be available to buy next month.

The pastel-coloured huts on the Cart Road will be replaced over the next three years, with the first 12 being delivered in March.

The huts will be taken to Woodmead car park and will be available for £50 each from Friday, March 8 on a first-come-first-served basis. Anyone who would like a hut will need to go to the council office or call 01297 445175 from 9am on March 8 to reserve a hut.

All huts will need to be taken away by Monday, April 1.

THE deadline is approaching for applications for minor and medium grants from the town council.

The deadline for applications is 5pm on Wednesday, February  27.

Working hard to ensure we get it right

OVERFLOWING bins and the litter-strewn seafront came under the spotlight over the early-May bank holiday weekend. […]

THE town council is hoping a new feature film about renowned fossil hunter Mary Anning will help put Lyme Regis on the map once again. […]

LYME Regis councillors will meet with a RNLI safety officer to discuss their controversial decision to oppose the erection of a new larger lifeguard hut on stilts on the main beach. […]