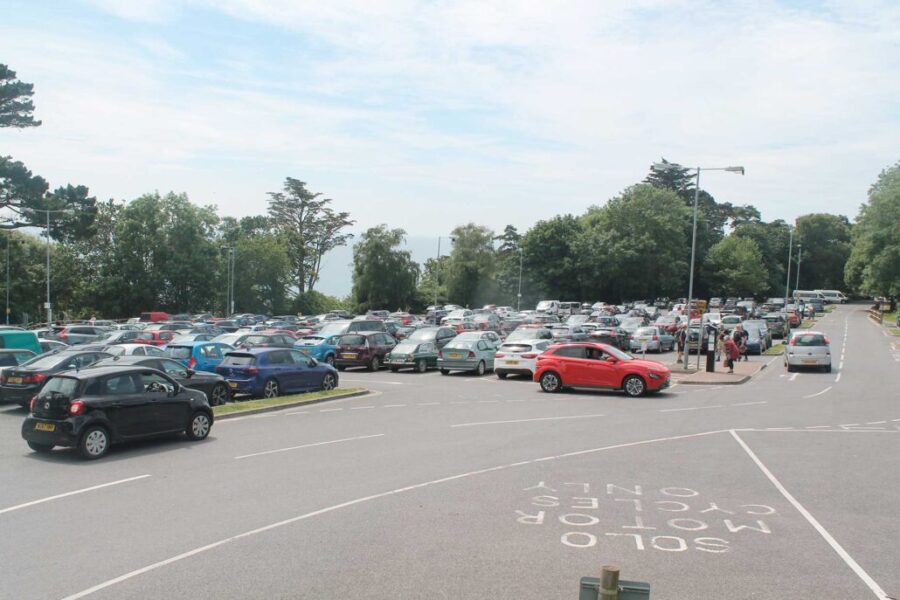 THERE may be some disagreement in the council chamber over what to do about Lyme’s increasing traffic problems – but all will agree that this summer is going to be pretty awful.

The May Bank Holiday proved that and every day the sun shines the main car parks are full before breakfast is served.

When the car parks are full it’s bedlam. Vehicles of all sizes driving around town to find that elusive space.

Some park as far out as the top of Sidmouth Road where there are more requests for yellow lines to prevent cars blocking the entrances and exits to the houses. It would take months for Dorset Council to agree to more parking restrictions and even longer for yellow lines to be laid.

The general opinion at this week’s council meeting, especially among the old hands who have discussed this problem and possible solutions many times before, is that there is not a solution. Lyme will just have to live with it.

Father of the council Stan Williams, soon to be made a Freeman of Lyme Regis for his 50 years of service, fought his first election back in the 1960s on a one-way system for the town.

It didn’t get anywhere, and nor has numerous other possible solutions to cope with Lyme’s increasing popularity as a resort.

Relative newcomer Councillor Belinda Bawden, accepting that the situation can only get worse, thinks the council should be looking at more radical solutions, telling her colleagues it’s “ridiculous” to do nothing.

Stopping traffic coming into the centre of the town is one of her ideas. This has come up before but there’s always been opposition to such a move, especially from the traders.

A few eyebrows have been raised by news that Dorset Council is planning to increase car parking charges in their two main car parks (Holmbush and Charmouth Road) to £10 a day.

Two years ago it was £2 a day but the new authority argued that this year’s £8 a day fee would include parking a car for 24 hours.

The problem here is that not many people want to spend 24 hours in Lyme; they want to park their car, enjoy a day on the beach, have a bite to eat and go home. Eight hours maximum.

The Charmouth Road park and ride will return for the six peak weeks in the summer, which should help the situation, but it won’t solve the problem.

Lyme Regis Football Club cashed in on the number of people looking for car parking facilities during the bank holiday for just £5 a hour. But this will be the last year the club will be allowing vehicles to park on the pitch as they are investing heavily in new drainage and other treatments to improve the quality of the surface now that they are playing Premier football.

The £10 a day fee will be hugely unpopular with Lyme’s trading community, not only because it adds to Lyme’s reputation as being one of the more expensive resorts along the south coast, but because it’s difficult for their staff who live outside the town to find parking.

The council is planning to have a special meeting just to discuss parking and to invite a Dorset Council representative to be present. This is not the first time this has happened, but they will be keen to show that they are not giving up completely.

Radical solutions have been found in other places, especially on the continent, and are worthy of further examination, but I can’t see this council embracing such ideas with much enthusiasm.

I HAVE written many times in this column about the impact sport has had on my life, especially football.

From at an early age, kicking a ball around the Anning Road playing field, pulling on a Lyme Regis shirt for the first time, ten years as chairman and now president, I’ve had enormous pleasure from being involved in what we used to call the “beautiful game”.

I even had five very enjoyable years as a vice-president at Tottenham Hotspur Football Club when I managed a London based sports publishing company.

But like many football fans of my age, I am totally disillusioned with the professional game, particularly the Premier League which has been ruined by money and greed.

But I am passionate about grass-roots football – local football played on school playing fields, on the village green and at local clubs like Lyme Regis FC. Very often – and this is certainly true about Lyme – with generation after generation playing and becoming committee members.

I am extremely proud of how the Lyme club has gone about developing the Davey Fort after the disappointment of losing the Strawberry Field site due to planning difficulties.

With the help of a generous capital grant by Lyme Regis Town Council, match-funded by ourselves, the four-year project is now reaching its conclusion. It would have been completed months ago had it not been for COVID.

With just the resurfacing of the car park and the erection of a new groundsman’s hut left to do, we will begin next season with a celebration to mark the opening of the new facilities.

The club is now playing at a higher standard than at any time in its long history and we commence our Devon and Exeter Premier East division as champions, having finished top of the table of a watered down league due to the pandemic, but, nevertheless, still an achievement to be proud of.

The club is going through a very busy time during the Euros with the clubhouse being opened to all-comers for all the England games. As you might imagine, they are pretty rowdy occasions as our players and guests cheer on England in the hope we can win the tournament.

At one of these games a young family visiting the town asked if they could join in and we welcomed them with open arms. They had a throughly enjoyable experience and some of players even took their young son out on the field for a kick-about. It made his day.

The couple wrote to us afterwards to thank us for our kindness. Reading the letter brought a lump to my throat because it demonstrated there is more to footballers than bad language. They know how to behave when they have to.

EFFORTS by the Cancer Research UK fundraising committee in Lyme Regis, of which I am chairman, have been defeated again in our bid to start to raise some money.

I’m sorry to report that our ‘Welcome Back’ Community Lunch, planned to take place at the Woodmead Halls on Sunday, July 18, has been postponed because of the extended COVID restrictions.

Thank you to all those of you who booked your tickets for what promised to be a real community event to celebrate our return to some sort of normality.

However, we will try again and find a suitable date once we known when the lockdown will be finally lifted.

DORSET Council has been awarded nearly £500,000 of government funding to help tackle rough sleeping in the county. […]

DORSET Council’s Cabinet are to meet virtually next week with a large and important agenda, including the budget for 2021/22 which is expected to see a shortfall of £35million.  […]

LYME Regis residents will be going to the polls on Thursday, May 6 to elect a new town councillor.  […]