PARK and ride will return for the summer holidays – all being well.

The council has traditionally paid for the service, run by First Group, usually starting at Easter, running during school holidays, at busy weekends and throughout the summer holidays.

The service didn’t run at all last year due to the pandemic and the prospect of being able to run at all this year has been very uncertain. This is because social distancing rules previously meant the double deck buses could only run at a significantly reduced capacity, making the service financially unviable.

While the council is pleased to subsidise the service for the benefit of the whole town and to help reduce town centre traffic, the risk was too great in the early months of this year.

We’ve held off making a decision on whether to run a summer service for as long as possible in the hope the restrictions would be sufficiently eased.

This approach paid off as the rules about social distancing on public transport changed recently, considerably increasing the number of people who can travel.

Not only does this improve the financial viability of the service, it also means we can provide a better service as it will reduce waiting times at peak periods.

As such, the council has made the decision to run the park and ride, from the usual Charmouth Road site, from July 24 to September 5. We will also increase from two buses on weekdays to three buses at weekends to further improve the service.

The timetable for the service will be made available on our website.

Hopefully this will reduce some of the congestion and parking chaos we’ve seen in the town centre over recent weekends and bank holidays, while also providing a boost to local businesses as more people will be able to visit the town.

WE have reluctantly turned down the offer of taking on the rebuilding of Regent Cinema.

The owners, WTW-Scott Cinemas, said it was highly unlikely they would be in a position to consider rebuilding the cinema for a considerable length of time.

They suggested the building and land could be passed to us to become a community asset and we would take on the rebuild.

This is something we have thought long and hard about as we recognise the value and importance of the cinema to the town.

While the council has supported the owners in their endeavours to rebuild the Regent Cinema since its destruction by fire in 2016, we don’t feel our role can extend to taking ownership of the site and assuming the risk and responsibility for the repair and reuse of the cinema.

That is a matter for either an experienced cinema operator, a commercial developer or another organisation whose aims and objectives are more closely aligned with that role.

The council continues to give generous support to many other local organisations and groups and we very much hope the cinema can be rebuilt and retained in its former use.

European funding to be spent on beach accessibility matting

EUROPEAN funding will help us support the re-opening of the town by providing beach accessibility matting.

The Welcome Back Fund is providing councils across England with funding from the European Regional Development Fund (ERDF) to support the safe return to high streets and help build back better from the pandemic.

We applied to Dorset Council, which is delivering the projects on behalf of town councils, and were successful in obtaining funding to improve beach accessibility.

We’ve already bought three beach wheelchairs, including one floating wheelchair, which people can hire out for free for the day.

However, users have told us it can be difficult to get down to the shoreline due to the soft sand and the number of people to navigate through on a busy day.

Beach accessibility matting will not only help wheelchairs traverse the sand, but also pushchairs and those who find it difficult to walk on uneven surfaces.

We’ll be placing 25 metres of matting on Front Beach and 25 metres on Monmouth Beach, hopefully in time for the peak season. 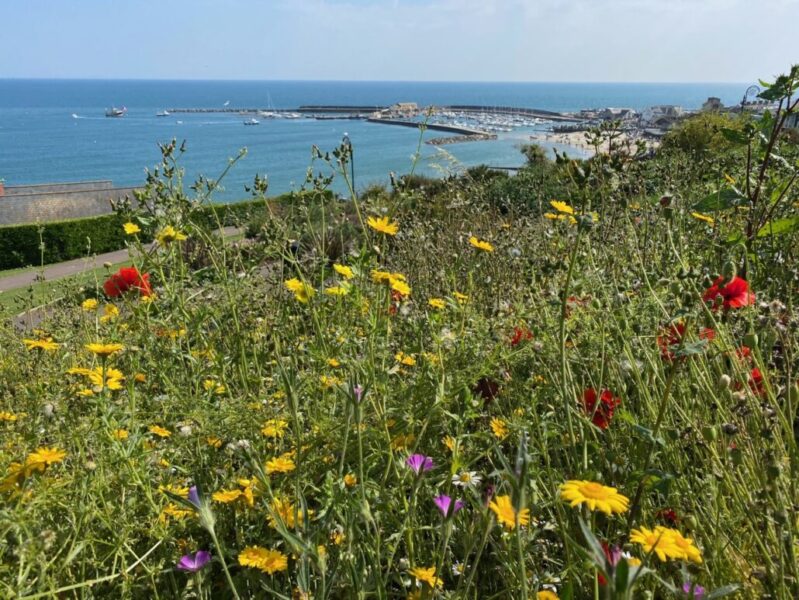 Spring wildflowers back in full bloom

THE colourful wildflowers are out in force in Langmoor Gardens once again.

We introduced a wildflower bed last year and the response from the public was overwhelming – everyone told us how much they loved it.

The wildflowers with the Cobb in the background probably became the most photographed view in Lyme last year!

Not only does it look beautiful, but more importantly, it supports us in our wider environmental aims.

THE mayor and deputy mayor have been formally elected to lead the council.

Cllr Brian Larcombe was nominated as mayor and Cllr Kelsey Ellis nominated as deputy mayor in April, but they aren’t officially in post until the first meeting of the new council year.

Both councillors were installed in their civic roles at the annual meeting of the council at the end of May.

Cllr Larcombe is now in his third year as First Citizen, while Cllr Ellis takes on the role for the first time.

We would normally hold a traditional mayor-making ceremony in May, but the restrictions made this impossible, so it is hoped we can hold a more low-key event in the autumn to celebrate their appointments.

Covid roadmap delay will have little effect on services

THE pause at Step 3 of the government’s COVID-19 roadmap will mean very few changes for the council.

Most of our services and facilities are already up and running, with some extra safety measures in place, but some operations will remain affected until at least July 19.

This means the council office remains closed, council meetings will continue to take place in the Pine Hall at Lyme Regis Baptist Church, and function rooms such as the Guildhall or Langmoor and Lister Rooms will not be available for hire.

While there is no longer a legal maximum number of people who can attend weddings and funerals, the numbers are determined by how many people can be safely accommodated with social distancing in place.

This means the cemetery chapel will now be available for funerals with up to 13 mourners, and we will continue to allow 28 guests to attend weddings at the Guildhall.

Play equipment out of action

WE apologise that two pieces of equipment are out of action at the play park.

The zip wire and basket swing at Anning Road play park have been closed off for repairs and we know how much the children are missing them.

Please rest assured the parts have been ordered but are taking longer than expected to arrive. They’re due to be delivered the week of 28 June and as soon as they’re here, we will get them fitted.

Residents call for a solution to Lyme’s traffic chaos

RESIDENTS of Lyme Regis have urged local councils to take note of their concerns and address the town’s increasing traffic problems. […]

PARKING attendants are playing a vital role in keeping traffic moving, according to Dorset Council.  […]