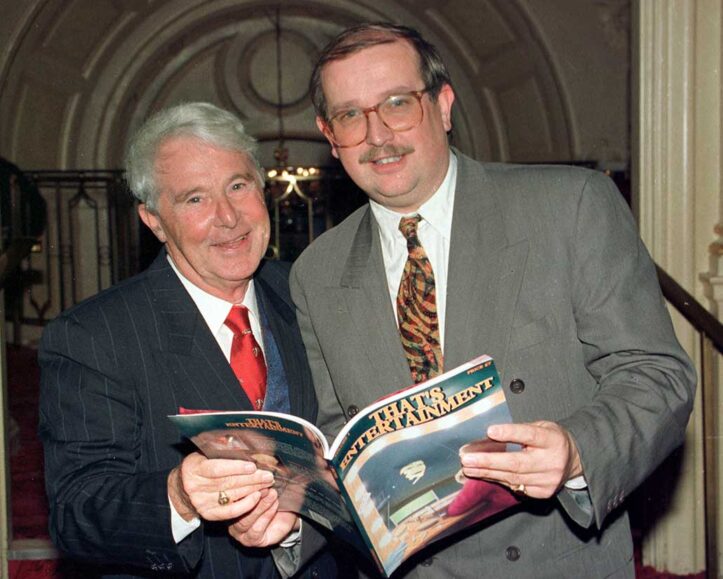 I WAS commissioned to photograph celebrities at the launch of a show-biz book entitled ‘That’s Entertainment’. It was at the world-famous London Palladium; this kind of work does not come along very often.

The commission came in the mid 1990s from the book publishers through local journalist Philip Evans, now managing director of LymeOnline, who was running newspapers in London at the time.

Philip and myself arrived at the front of the Palladium in a cab to a glitzy reception and mingled with all the top UK entertainment personas, which included Barbara Windsor, Ernie Wise and even Nookie Bear with ventriloquist Roger de Corsy.

Philip and I were talking when we were approached by Ernie Wise, one half of the famous Morecambe and Wise comedy duo, but sadly missing Eric Morecambe.

It was an awkward five minutes because he thought we were both actors in the entertainment business, but we both managed to talk around the conversation and I think he still thought we were actors.

I was left alone with Ernie when Philip was drawn away and, fishing for conversation, I passed comment on how well tuned out he was and what a really nice pair of shiny shoes he was wearing. They were black patent shoes and when he looked down he was concerned about the amount of rain spots on his delicate shoes.

For half a moment I thought the look on his face was asking me to grab a napkin and wipe them clean. I didn’t oblige, but wished him all the best and to have a great day… and what a great day we did have!