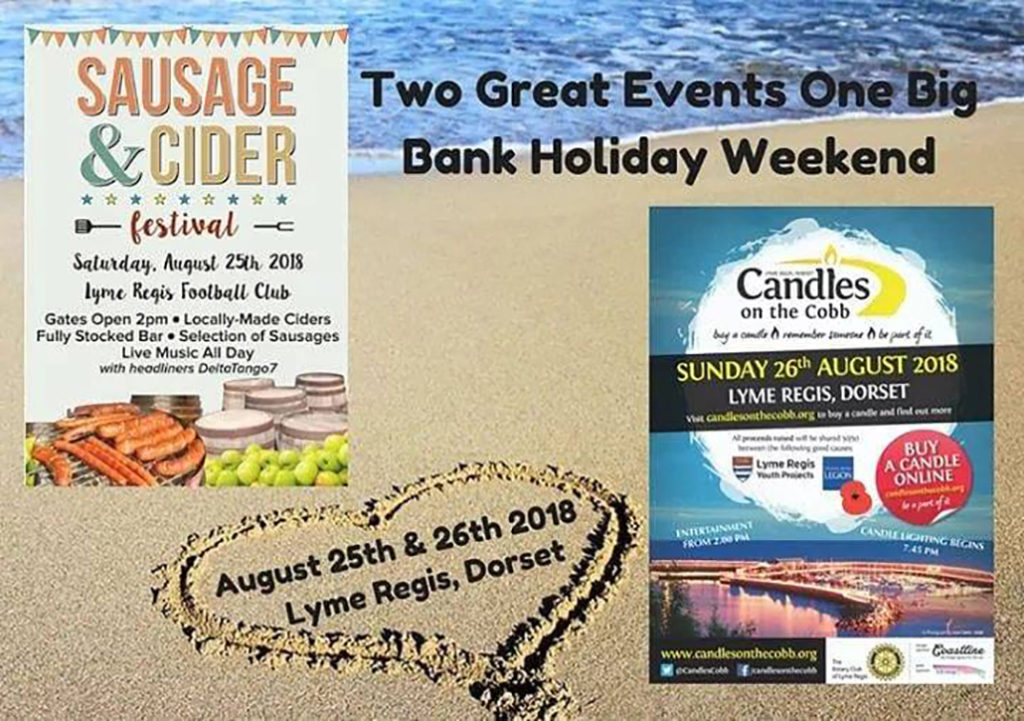 AUGUST seems to have flown by in the blink of an eye and the heatwave has cooled off, but Lyme Regis shows no signs of winding down towards as the end of summer approaches.

This weekend is being billed as ‘The BIG Bank Holiday Weekend’, with two major events to be staged in the town.

Lyme Regis Football Club kicks things off on Saturday (August 25) with its popular Sausage & Cider Festival. A selection of Colyton Butchers’ finest sausages will be sizzling on the barbecue, while locally-made ciders will be available at the bar.

There will be live music throughout the day, with headliners Delta Tango 7 playing at about 8pm, plus attractions for all the family. Gates open at 2pm and entry is free.

Candles On The Cobb makes a welcome return on Sunday (August 26), with 5,000 candles set to light up Lyme’s historic harbour at 8pm.

The event has raised tens of thousands of pounds for local and national charities, growing each year since it was first thought up by assistant harbourmaster Mike Higgs and former town crier Phil Street in 2000. But when the original organising committee announced they didn’t intend to hold Candles again after the last event in 2015, Lyme thought it was the end for this spectacular fundraiser.

Thankfully, the Rotary Club of Lyme Regis has taken on the organisation this year, so residents and visitors can once again enjoy this completely unique and moving event.

The 5,000 candles are available to purchase for £2.50 each in memory of loved ones and funds will be split between local youth causes and the Royal British Legion, honouring the 100th anniversary of the end of the First World War.

If the bumper Bank Holiday wasn’t enough, the town will be filled with music and dancing as Lyme Folk Weekend hosts one last summer party from Friday, August 31 to Sunday, September 2.

It may be time to go back to school but that doesn’t put an end to the special events in Lyme, as Mark Hix hosts the sixth Food Rocks festival over the weekend of September 8 and 9, bringing top chefs and the best produce the West County has to offer to town.

It’s set to be a spectacular end to a scorching summer in Lyme Regis, but we’re not quite ready for the party to be over just yet.

SEPTEMBER is just around the corner and that ‘back to school’ feeling has started to sink in. But Lyme isn’t one to let summer slip away quietly – we like to go out with a bang! […]

ENJOY playing music and singing on the streets? Playing piano or drums on the seafront? Watching some fantastic live music from B Sharp’s young bands? It’s all happening in Lyme Regis over the Spring Bank Holiday weekend. […]

PREPARATIONS for Lyme Regis Fossil Festival got underway with a weekend of making prehistoric marine reptiles at The Hub. […]