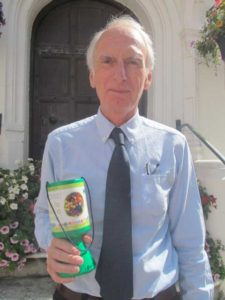 A CHILDREN’S hospice has been chosen as the mayor’s charity for this council year.

The Mayor of Lyme Regis, Cllr Brian Larcombe MBE, will be supporting Children’s Hospice South West, which provides free care and support for more than 500 children with life-limiting conditions and their families across the South West.

Cllr Larcombe will be raising funds for the charity throughout his term of office, with various fundraisers already being planned.

He will also be asking local businesses, shops and food outlets to have a collection tin on their counter, encouraging the public to give their small change to support the cause.

Cllr Larcombe said: “I’ve chosen Children’s Hospice South West for my mayor’s charity because it supports local children within our region who will not have the chance to live the length of lives we are fortunate to have.

“Think of all we are lucky enough to live, from the very simple sunny day through to the most enjoyable and rewarding of things. They are robbed of so much.

“Perhaps this charity prompts us to think about the simple things every day gives us and we take for granted. We fill our time often without realising where it went – these children don’t have that chance.

“Your donations will help give them something in their brief lives that helps make as much as possible of the short time they have on earth.

“Your small change will help make a big difference to a short-changed life.”

Parents can take a break from being primary carers for a few days and brothers and sisters are supported by a dedicated sibling team, meaning the whole family can relax and make precious memories together.

The hospices also offer specialist palliative care, emergency stays, end-of-life care, and bereavement support for as long as it is needed.

The charity needs about £10million a year to run its three hospices and relies almost entirely on voluntary contributions.

Lyme Regis area community fundraiser Paula Hullett said: “We are thrilled that Cllr Larcombe has chosen Children’s Hospice South West as his mayoral charity and wish him every success for the municipal year ahead.

“It’s fantastic to have his support; it will make such a big difference to our charity, not only in terms of fundraising, but by raising awareness of what we do for people in the Lyme Regis area.”

If any local businesses would be willing to have a collection tin, please contact Kerry Weekley on 01297 445175 or email assistant@lymeregistowncouncil.gov.uk 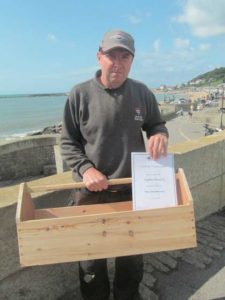 OUR maintenance operative is putting his newly-acquired woodwork skills to good use in his work for the council.

Steve, who has worked for the council for 13 years, had picked up woodworking skills over time but wanted to ‘learn everything the right way’.

He said: “It was more what I had picked up working alongside carpenters on building sites and although I picked up some good tips, I had never actually learned properly.

“You get into old habits and think you’re doing something right until you’re told otherwise.

“Due to the amount of woodwork I do in my job, I thought it would be good to do something professional, something that would benefit me in my everyday work.”

Steve thoroughly enjoyed the one-to-one course at the BBA and by the end of the four days, he had used his new skills to make a tool box.

“The course was absolutely terrific,” he said.

“It was exactly what I wanted to do. It was very detailed and so well explained.”

Steve would like to thank everyone at the BBA for making him feel so welcome, especially his instructor Steve Hewins, principal Will Reed, and training manager Paul Dyer.

Henry’s Way play area to be refurbished by half term

WORK to refurbish Henry’s Way play park will begin in early-October and is expected to be finished for the school half term.

The council approved new designs for the park after previous proposals caused concern from some local residents.

The new equipment will include a wok roundabout, a pod swing and a helicopter springer, all of which are accessible, as well as new ground surface and a gate at the entrance.

To address residents’ concerns about overlooking and the safety of children, we’re also increasing the height of the fencing around the park.

The £20,000 refurbishment will be paid for by section 106 funding, which are community contributions relating to planning permissions for developments in Lyme Regis.

There is still £9,000 of this funding left over, which is ring-fenced for play parks, so we’ll soon be considering how we could use this to improve facilities at Anning Road.

Work on the Henry’s Way play park will begin the week commencing October 7 and should take no more than two weeks to complete, weather permitting.

A FORMER ice cream parlour in a prime location on Lyme Regis seafront is up for rent.

We are now advertising a seven-year lease for the commercial premises on Cart Road.

We’re currently carrying out re-roofing works, which we expect to be finished by the end of November, so the lease will start from January 1 2020.

The premises include a shop/preparation area, a serving hatch and an outdoor seating area for up to 32 covers.

The unit has planning permission for a range of uses, including shop, restaurant or café, hot food takeaway and financial and professional services, with opening hours limited to between 7am and 11pm.

The premises are being marketed by Martin Diplock in Lyme Regis, who can provide more information and arrange viewings for anyone who is interested in renting the space.

With such a prominent position on the seafront, we’re expecting a lot of interest, with 14 people expressing an interest before we’d even advertised it.

The closing date for bids is Monday, September 30 at 5pm.

LYME Regis Town Council is now back up to full strength with the election of Rob Smith.

Cllr Smith, a Green Party candidate, was elected as a town councillor in the by-election on August, 8, winning the poll with 255 votes.

He will carry out his first council engagement on Wednesday, September 4, when we are holding an extraordinary full council meeting to deal with some urgent business.

The election of Cllr Smith brings us back to the full 14 members, an even split of seven councillors from the last administration and seven new faces.

TOWN councillors have once again considered measures to deter seagulls, which have become an increasing nuisance in Lyme Regis in recent years. […]

Eagle called in to scare off gulls

BIRDS of prey were called into Lyme Regis during the Easter holidays, as a trial run to see what effect the larger birds would have on seagulls in the area. […]

LYME Regis Town Council offices will be closed from today (Monday) in line with the government’s latest COVID-19 guidance. […]