THE town council is hoping a new feature film about renowned fossil hunter Mary Anning will help put Lyme Regis on the map once again.

The 1981 film ‘The French Lieutenant’s Woman’ provided one of the most unforgettable scenes in cinema and continues to draw visitors to the town to see where Meryl Streep stared out across stormy waters at the end of the Cobb.

The potential to raise the town’s profile further and boost the local economy has persuaded the council to contribute £5,000 towards the making of ‘Mary Anning and the Dinosaur Hunters’.

Set in 1800s Lyme Regis, the film tells the story of the poor carpenter’s daughter, who rarely received credit for her discoveries, during a time when only men were allowed to be part of the scientific community, but who became one of the most renowned palaeontologists of all time.

The protagonist is played by Katharine Hamilton, while her mentor, Elizabeth Philpot, is played by ‘Call the Midwife’ star Jenny Agutter, and geologist Henry De la Beche is played by Tom Machell.

Filming has taken place on sets and around Lyme Regis over the last two years, including on the beach at low tide and at Lyme Fossil Shop, with local people playing parts in the film. The council’s funding will be used for editing and the final pick-up shots to complete the film.

Once complete, the film will have a charity gala screening in Lyme Regis, hopefully later this year, before being entered into film festivals.

Director and writer Sharon Sheehan said: “Lyme Town Council and the local community have been tremendously supportive of the film and we are extremely grateful to everyone.

“The films have already received unprecedented interest worldwide, from ITV, the BBC and the Natural History Museum who have written a fantastic article about the film.

“It’s all very exciting, and we’re hoping to secure funding for the second of this two-part Mary Anning feature film biopic and go into production shortly.” 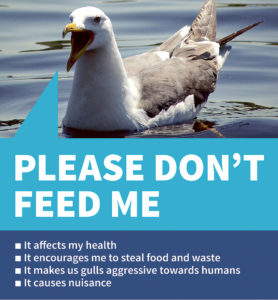 WITH the continuing hot weather and the school holidays now upon us, the town’s seagull population is having a field day.

We have been getting increasing reports of seagulls swooping and snatching food, which can be very distressing.

The council has no statutory duty to control seagulls, and although they can be a nuisance, our options are limited because seagulls are protected. Our approach to help tackle the problem has been to educate the public and promote awareness.

Here’s a reminder of the advice we would offer to the public:

Remember, it is now a civil offence to intentionally feed seagulls and anyone caught doing so can be issued with a fixed penalty notice, carrying a penalty of up to £100.

No decisions made on future of major events and festivals

THE council has been considering the future of major events which take place on council land – but no decisions have been made yet.

Lyme Regis has a packed programme of annual events, most of which take place during school holidays, at weekends, or on bank holidays. There are those who think the town is busy enough during these peak times and we don’t need events to attract visitors, and there are others who believe visitors come to Lyme because of the events.

Either way, it’s caused a lot of debate, both within the council chamber and among the wider community. The important thing to remember is that no decision has been made to ‘ban’ events on council land.

Councillors will be debating this issue at a meeting of the Tourism, Community and Publicity Committee on August 1 and as always, the public are welcome to attend, give their views, and listen to the debate.

Visitors encouraged to park and ride

MORE than 7,000 people have used the park and ride service since it opened in May.

The Charmouth Road service has been well used and is helping to keep traffic out of the town centre. We’re expecting the service to become even busier during the summer holidays when it is open every day.

We would encourage visitors to use the park and ride wherever possible – it’s hassle-free, cheaper than the short-stay car parks on the seafront, and stops at various locations around the town.

Buses run every 20 minutes between 10am and 7.30pm. We’ve also arranged for the park and ride to operate throughout the evening on Sunday 26 August when Candles on the Cobb takes place, with four buses leaving the town between 9.07pm and 10.07pm.

LOCAL government arrangements in Lyme Regis are set to change when the new Dorset Council is created.

An electoral review is being carried out to draw up a new pattern of ‘wards’ across the county, which will take effect when the new unitary authority comes into being on April 1 2019.

The Local Government Boundary Commission for England (LGBCE) is also reviewing the number of councillors that should be elected to Dorset Council, as well as the names and boundaries of the council wards. It’s proposed the new council will have 82 councillors, with one councillor representing a combined Lyme Regis and Charmouth ward.

The LGBCE wants feedback from local people on its recommendations and the town council has already given its view. We agree a single-councillor ward for Lyme Regis and Charmouth is in the best interests of the town – but that’s our view, you may have your own.

Now is the time to have your say and you have until August 27 to do it. Get involved by visiting the website www.consultation.lgbce.org.uk, email reviews@lgbce.org.uk or Tweet @LGBCE.

This content is supplied and promoted by Lyme egis Town Council

LYME Folk Weekend made its successful return with a bumper Bank Holiday weekend of live music. […]

LETTER: Silent nights in the gardens thanks to security guards

I WOULD like to take this opportunity to thank Lyme Regis Town Council for bringing in the security guards. […]

THE Marine Theatre’s first ‘Tuesday Night at the Movies’ series will come to an end on June 18 with a screening of award-winning film ‘The Piano’ (1993). […]