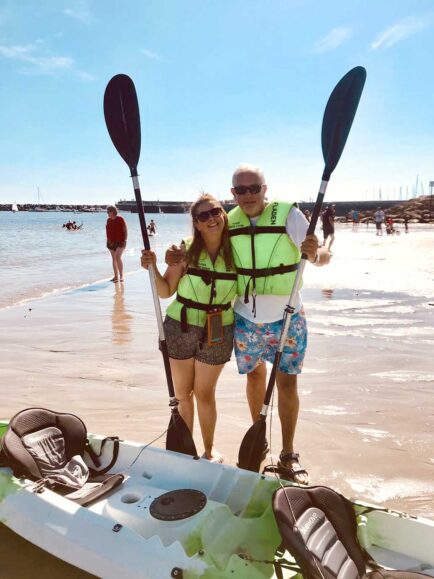 IN our last edition I wrote about how summer was well and truly over, but as soon as the paper came out, so did the sunshine! That’s typical in newspaper publishing – not that I have any complaints.

Just in case this definitely was the last of the summer weather, Dad and I made the most of it by hiring a kayak off the beach and heading out into the bay, something we’ve been meaning to do together since Dad’s 70th birthday last summer.

It was something of a comedy; Dad had never been in a kayak before and I’m not exactly an expert, so to say we were un-coordinated is an understatement.

Struggling to get our paddles in time, and with Mum anxiously watching from the shore, we decided not to head out too deep. In fact, at one point we were so shallow that we got stuck on Lucy’s Ledge and I thought I was going to have to jump in to push us off. Dad made it quite clear he was not getting in.

I can imagine our rivals’ headlines now, ‘Lifeboat called to local newspaper editor marooned just metres shore’. I’m sure it would have provided the crew with a few laughs!

Needing refreshment after all that hard work, we topped the day off with a couple of jugs of Pimm’s outside the Harbour Inn. That seems like a long time ago now that we are nearing October.

Already, everyone’s thoughts seem to be turning to the ‘C-word’, although I’m not sure I’m ready to think about it just yet… at least not until Halloween has passed.

But shops and businesses are already gearing up for the festive season, as you will see with some of the advertisements in this week’s printed issue of LymeOnline, including our double-page feature on all the latest news and offers at Colyton Butchers.

Lyme Regis Christmas Lights Committee’s campaign is also gaining pace (see page 10). Instead of hiring different lights each year, the committee has this year decided to start purchasing its own illuminations, which they plan to expand every Christmas.

Following a successful evening with local, award-winning photographer Richard Austin last week, which made £350 towards the display, the committee’s fundraising efforts continue this weekend, as they host a traditional harvest home auction, 4pm on Sunday, September 29 at the Nag’s Head.

Tickets for their grand raffle are also still available from the Slipway store at the harbour or from the website www.lymechristmaslights.co.uk, with winners to be drawn at the big switch-on on Saturday, November 30. And you know that’ll be here in a flash!

The latest issue of LymeOnline, bringing you all the news, sport, entertainment and events from Lyme Regis, Uplyme & Charmouth, including a General Election preview for the West Dorset parliamentary constituency. […]

LYME Rovers got a measure of revenge over Perry Street Division Three promotion rivals by thoroughly and convincingly beating them 5-0 to reach the final of the John Fowler Cup. Turning up with a full […]

ANDREWSHAYES Holiday Park in Dalwood, near Lyme Regis, has teamed up with Devon-based charitable trust DDH UK by giving one lucky family a much-needed break in a luxury lodge.  […]