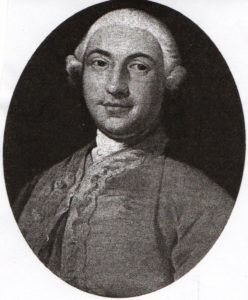 THE history of the town is beset with periods of commercial decline. Such was its state in the 1760s, it required an enlightened input to lift it out of the apathy and inertia that prevailed.

The very future of the town as a ‘watering place’ was in jeopardy. The man who came to its rescue was Thomas Hollis.

As a teenager he inherited two large family fortunes. He was well known for his philanthropic acts, particularly in America where he was a major benefactor to Harvard University, establishing a Chair of Divinity and supplying its library with thousands of books after a major fire.

He owned estates in West Dorset and in the late 1760s became a regular visitor to Lyme, becoming deeply attached to the town. At first he rented rooms at the Three Cups, which at that time was adjacent to Cobb Gate.

Subsequently he purchased the property, designating his bachelor apartment ‘Liberty Hall’ and converting part of it to Assembly Rooms. Such a facility was an essential social provision for the town’s wealthier residents and visitors from the upper classes, allowing them to fraternize.

Light refreshments along with newspapers were available, there were rooms for pastimes such as reading, cards and billiards. Various social events were held, these included dances and on special occasions balls.

The altruistic Hollis set about improving the rundown appearance of the town, buying up ramshackle buildings below Middle Row in Broad Street and presenting them to the town for demolition.

The removal of derelict cottages in Pound Street was another of his projects. He also provided funding to repair the walls of Cobb Gate and to extend the walk along the seafront beyond the old stone fort where he had steps built to access the beach, this in time became the Marine Parade.

He had strong views on religious discrimination, although it was said ‘he scarcely ever visited places of worship’. Despite which he gave money to repair the church and generous donations to the Baptist Chapel. Such acts led to him being described as ‘having acted the good Samaritan all his life, helping the poor and living for the benefit of others’.

Hollis made a major acquisition for the town when he purchased the Cobb Gate warehouse and the site for the town. In 1777, new Assembly Rooms were built on the site, they were not demolished until 1928.

Unfortunately Hollis died in 1774 (aged 54 years) while walking in a field on his estate at Corscombe. He called out that he was ‘feeling giddy’ and fell down dead.

In compliance with his instructions he was buried in a ten foot deep grave in one of his fields without any form of marker.

Lyme has failed to acknowledge the debt it owes the man that started the town on the first meaningful steps towards a tourism-based economy. Maybe one day Lyme will give Thomas Hollis the recognition he deserves.

An election at last… but one familiar face will be missing

THE big surprise in the list of 16 nominations for the 14 seats on Lyme Regis Town Council, for the May 2 election, is that it doesn’t include the name of Owen Lovell. […]

A TEAM of volunteers is spending the whole of January rebuilding the waterwheel at the historic Town Mill in Lyme Regis. […]

HISTORICAL buildings around Lyme Regis will be opening their doors this month for the national Heritage Open Days scheme. […]