IN the first of a series of articles marking Lyme Regis Museum’s 100th anniversary, director David Tucker shares the history behind the building and how it has developed over the years into one of the town’s leading visitor attractions… 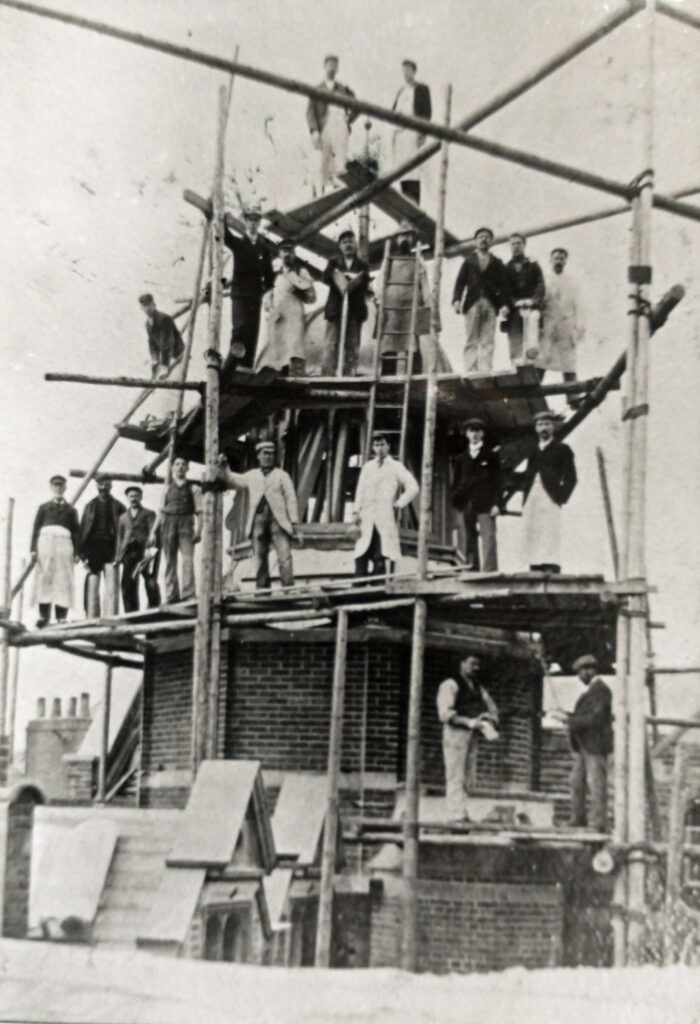 Built by Lyme builders Caddy, an image still exists of the topping-out ceremony. The photograph above, clearly taken from the Guildhall, captures the builders arranged on a wooden scaffold around the museum’s tower.

It’s quite clear that in the early 20th century attitudes to safety were somewhat less robust. There’s an absence of safety railings and protective headgear seems to be limited to tweed caps. One can only assume a few celebratory ‘halfs’ had been quaffed too.

The museum was funded by local businessman and ‘big cheese’, Thomas Philpot. He decided the town was going to have a museum whether it liked it or not. And so, the Lyme Regis Philpot Museum was born.

The building had no real function until 1921, when the museum somewhat reluctantly came into the ownership of Lyme Regis Borough Council. It was opened for one afternoon a week, a far cry from the seven days a week regime the museum operates in a ‘normal summer’ today.

Since 1921, our building has significantly changed and the main driver of that change has been the sea. For the best part of 90 years the museum stood within metres of the sea and over many decades was pounded by large waves.

To this day, salt still leaches from the building on the seaward side, taking the paint off the walls.

As anyone in Lyme over the age of 40 will remember the town’s eastern seafront looked very different before Lyme’s sea defences were significantly upgraded in the 1990s and the Cart Road was built in front of the museum with it protective rock armour.

Before then, it was possible to stand behind the pillars supporting the museum’s east wing as waves broke either side of you – or so I’m told. High tides weren’t a problem for me growing up in Northamptonshire.

It was impossible for the museum not to take that kind of treatment without very serious consequences and in the years after the Second World War the sea damage became increasingly apparent. 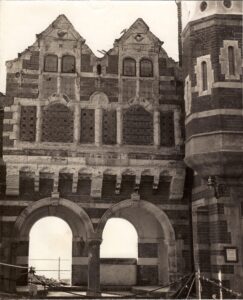 The most ornate part of the museum, the limestone and brick East Wing became unstable and had to be demolished. It was replaced in 1968 by the rather less exciting current east wing, which is a storey shorter than the original.

As the image shows, even in its damaged state the original was an impressive construction.

Once the Cart Road made the museum safe from the attentions of the sea, we were able to glass in the ground floor and construct the Victorian style conservatory which stood on the seaward side of our building until September 2016 when work began on the construction of the zinc and glass Mary Anning Wing.

We have planning permission to rebuild the missing east wing in a form that matches the lovely vanished original and return the building to its original glory.

When we do, we’ll ensure that just like the Mary Anning Wing that we use materials able to survive in the rarefied environment that is the Lyme sea front – it’ll need to be sturdy enough to mark the museum’s 200th anniversary in 2121.

A LYME Regis writer is among 100 to have their work published as part of a project to commemorate 100 years since the end of the First World War. […]