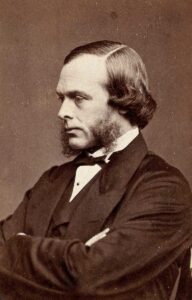 IT seems much longer ago, but it was only in February that Boris Johnson first exhorted us all to wash our hands for at least 20 seconds to protect ourselves from transmitting the COVID-19 virus.

Roll on some six months later and there are varying opinions on what extra precautions we should or shouldn’t take in dealing with the coronavirus and trying to find a “new normal”.

One thing that we can probably all agree on though is that thoroughly washing our hands after activities like shopping is good basic hygiene and avoids spreading illnesses – even without a worldwide pandemic to encourage us.

It was not always the case though, and it is one of those quirks of history that Lyme Regis has a link with the national regime of hand washing!

If you walk around the town, you will encounter the Lister Gardens and the Lister Room. These are, of course, named after Baron Joseph Lister of Lyme Regis who was a pioneer of antiseptic surgery.

The excellent Lyme Regis Museum has researched the family connections with Lyme and their article on the Lister holiday home at High Cliff on the Sidmouth Road (The Listers at High Cliff) makes for fascinating reading.

The affection in which Joseph Lister held his holiday town is clearly reflected in his choice of title when he was elevated to a peerage by Queen Victoria in 1897.

In order to appreciate early 19th century hygiene (or rather the lack of it), we need only to consider what surgery was like back then.

Surgeons wore their everyday clothes, instruments were dirty, nurses and doctors rarely bothered to wash their hands and bed linen was not changed. Spectators could even watch in the public arena of the “operating theatre”.

Not surprisingly, the death rates were very high for even simple medical procedures, like repairing compound fractures, because of the likelihood of sepsis and gangrene from infection.

To make matters worse, anaesthetics were eventually introduced enabling the surgeons to attempt longer and more complicated procedures in this unhygienic environment – with even higher death rates!

The problem was that the medical establishment of the day believed that infection was caused by gases entering the wound. This miasma theory held that diseases were caused by “bad air” emanating from decomposed matter – and there was plenty of that about in Victorian times.

Attempts were made to keep the air fresh in the belief that the smell itself carried disease. A remnant from this period is the naming of malaria (mala means bad and aria means air in Italian).

On becoming Professor of Surgery at Glasgow University, Lister became inspired by Germ Theory. Advanced by the French biologist Louis Pasteur, this theory conjectured that infectious disease is actually spread by microscopic organisms – or germs – which can be bacteria, fungi, viruses or other pathogens.

After experimenting with various substances, Lister developed his Antisepsis System and published it in a classic 1867 article in The Lancet entitled ‘On the Antiseptic Principle in the Practice of Surgery’.

He recognised that microorganisms were the real culprit in infecting wounds and that these needed to be eliminated.

The Lister antiseptic system was based on weak carbolic hand washes for medical staff and carbolic acid baths for cleaning surgical instruments. Solutions of carbolic spray were also used to reduce germs in the air.

Although mortality rates plummeted, Lister’s application of Germ Theory was met with opposition and some surgeons thought that these precautions were unnecessarily expensive and complex. Surgeons were just not used to using a scientific approach and some refused to believe in Germ Theory.

Nonetheless, the statistics spoke for themselves and gradually in the latter part of the 19th century good hygiene found widespread approval in surgery.

Hand washing in particular was seen as the single most important activity in preventing cross-infection, but even as recently as the 1980s hand hygiene was not perfect. This was due to the time it took healthcare workers to wash their hands thoroughly with soap and water in between attending patients.

With the rise of resistant infections like MRSA, the introduction of alcohol based hand rubs in the 1990s became an important tool that could be quickly applied.

Today, we are now used to seeing hand gels readily available in shops and pubs as well as hospitals to supplement regular hand washing.

These days we readily accept the existence of germs even though they are tiny – the SARS-CoV2 virus (the cause of COVID-19) measures just 125 billionths of a metre in diameter!

This is because using electron microscopes and even particle accelerators we can actually “see” viruses and bacteria, work out their structures and then use this information to help design drugs and vaccines.

Such imaging also helps us to understand the reason why a simple bar of soap is so effective against the coronavirus.

So, when we are all thoroughly washing our hands (or using hand sanitiser) to eliminate those invisible germs, it is well worth remembering the role of Baron Joseph Lister of Lyme Regis who over 100 years ago introduced the whole idea!

DORSET has been moved up to Tier 3 as the threat of coronavirus continues to rise across the country.  […]

Coronavirus case numbers back on the rise across Dorset

CORONAVIRUS case numbers across Dorset have more than doubled for the second week running.  […]