WE’RE looking ahead to the next few years with renewed energy as the local community has shown its support for the projects we’re hoping to achieve.

Over several weeks, we’ve been talking to the public about our plans and objectives for the next five years. We held an open afternoon at the Woodmead Halls and asked all our Lyme Voice participants to take part in a survey.

We’re really pleased the feedback has shown we’re on the right track and the work will start now to fulfil our ambitions.

One of the most popular proposals was to explore the possibility of a free town bus and a Saturday service. The council heavily subsidises the number 71 town bus and the vast majority who use it have a concessionary bus pass. We’re considering increasing the subsidy and offering free travel to Gateway Card holders.

You also told us we need to be better at engaging with residents and businesses in Lyme so we can properly understand your views, so we’re planning on developing a community engagement strategy to outline how we’ll do this.

Our plans for tree planting, re-wilding and wildflower planting in council green spaces was also a popular project, which would run alongside the refurbishment of the Langmoor and Lister Gardens.

You also liked the idea of us working with Dorset Waste Partnership to improve signage on the waste bins on the seafront. All the waste from the bins is recycled, but better signage is needed to make this clearer.

Green initiatives were well-supported, including proposals to introduce electric charging points in our car parks and on land we own, replacing all our vehicles with electric vehicles, and moving to green utility providers.

You also recognised the importance of park and ride to the town. The council’s park and ride currently operates from Charmouth Road and we must secure the long-term future of this facility and consider alternative sites.

These are just a selection of the ideas we discussed with the community and there was also an opportunity to make suggestions.

We weren’t at all surprised that traffic was the biggest issue, followed by dogs, parking, and the cinema.

Many of the comments were about issues that aren’t the town council’s responsibility, such as recycling, the pedestrian crossing, affordable housing and pavements.

While we are able to work with partners such as Dorset Council and Dorset Waste Partnership to address local issues and apply pressure where it’s needed, we have no control over other organisations.

The full results of the public consultation are available on our website www.lymeregistowncouncil.gov.uk 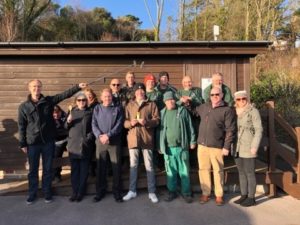 A NEW mini golf champion has been named after the annual staff tournament.

Each year the town council staff challenge each other to a round of mini golf in Lister Gardens.

The 2017 winner Mick Heneghan, who works at the mini golf hut, was aiming to win back the title after losing the trophy to finance assistant Naomi Cleal in 2018.

Mick took the top spot this year, completing the course with an impressive score of 37, although this was no challenge to the course record of 32.

At the other end of the scoreboard, it was a three-way battle to avoid the wooden spoon, which eventually went to our temporary administrative assistant Jackie King, on her first day at work!

Working with the new Dorset Council

WE were pleased to welcome the leader of Dorset Council to Lyme Regis last month to discuss issues affecting the town and county.

Cllr Spencer Flower was invited to meet with the council as part of the members’ training and induction programme, which has also included a meeting with former West Dorset MP Sir Oliver Letwin.

Cllr Flower spoke to us about Dorset Council’s plan and the issues facing the authority. Members asked questions about matters concerning the town, including the future of public services such as public toilets, the tourist information centre, grants to local organisations, and the harbour.

The induction programme will continue with a meeting with the Dorset police and crime commissioner Martyn Underhill early in the new year.

IF you’re interested in becoming a town councillor, now is your chance to join the council.

Notice has officially been given of a councillor vacancy following the resignation of our deputy mayor, Cllr Jeff Scowen, on December 16.

The first step in the process to fill the seat is to determine if an election will be held – for this to happen, at least 10 electors must make a written request to the returning officer at Dorset Council by 10 January.

If the 10 requests aren’t made, the town council will select a new councillor, a process known as co-option. But if an election is called, it will take place no later than March 16.

Requests for an election must be made in writing to the Returning Officer, South Walks House, South Walks Road, Dorchester, Dorset, DT1 1UZ.

If you want to find out more about being a town councillor, please contact the council office or speak to one of our existing councillors.

LYME Regis Town Council has confirmed a donation of £15,000 has been made by the makers of Mary Anning biopic ‘Ammonite’. […]

MORE police officers on the ground and a crackdown on anti-social behaviour. Those were the pledges made by Dorset’s new Police and Crime Commissioner (PCC) David Sidwick when he visited Lyme Regis recently. […]