NEWS that West Dorset District Council has agreed to contribute £1 million towards the cost of much-needed improvements and protection of Lyme’s most famous landmark, the Cobb, will be welcomed by all in the town.

The £2.3 million project, with the remaining funding coming from the government’s Department for Environment and Rural Affairs (Defra), will be phase five of the coastal protection scheme going back to the 1990s, which has changed Lyme immensely without altering its charm.

There are, of course, those who prefer Lyme’s old beach but the town is now protected from the ravages of the sea that were endangering its safety.

Relationships between Lyme Regis Town Council and West Dorset District Council have never been strong from the time local government was reorganised in 1974. That was when Lyme lost its borough status and became part of the district council, although Lyme retained many more functions and responsibilities envisaged by the original Act of Parliament.

That caused great friction in the early days and when I became mayor in 1984, ten years into the new two-tier system, relationships were highly strained.

The chairman of West Dorset District Council in those days was Hedley Haward, an experienced councillor who initially looked upon me, at the age of 34, as a whipper-snapper. As it happened we got on really well and I was responsible for signing over the control of the lucrative Monmouth Beach car park much to the disappointment of many fellow councillors.

The town council could not actually afford to run it properly and we came to an agreement whereby the council would receive a rent for a 25-year period. Lyme made quite a bit from this deal but the district a great deal more. Now, sensibly, with Lyme Regis Town Council in a much more secure position, the car park has been taken back from the district council and is proving equally as lucrative for our own coffers.

Whilst relationships may have been strained with Dorchester throughout the years, Lyme cannot complain about the support that West Dorset District Council has given this town in completing the coastal protection scheme. It was, of course, their statutory responsibility to do so, but I think they have done a wonderful job over the years and have done their best to take on the views of local people to make sure we have ended up with a scheme that has enhanced our town.

The completion of the Cobb is the final phase and it is appropriate that the plans should be drawn up before WDDC amalgamates with Dorset county to form the new unitary Dorset Council in May next year. A parting gift, you might say.

The new authority is fast approaching with public consultation taking place by the Boundary Commission until the end of August over the wards and number of councillors. The proposal put forward by the Boundary Commission is for one councillor for Lyme and Charmouth and one for the rest of the Marshwood Vale, although an alternative suggestion, two councillors for all three areas (i.e. Lyme, Charmouth and the Marshwood Vale) is mounting.

Being the furthest community to the west of the county, it is hugely important that Lyme is well represented on the new authority.

Never at a loss in the summer

GROWING up in Lyme kids have never been at a loss for something to do in summer. I remember my own summer holidays with great affection.

This might have been an excuse for “we can’t afford a holiday”, but we were packed off for the day shortly after breakfast and told not to come home until tea time. “Go and enjoy yourself,” was the instruction.

Those hot summer days were spent kicking a ball around the playing field for hours on end, or on the beach if the pitch was wet, building camps in the gully or Tree Camp, biddleknobbing down the Cobb or jumping of the Bumbles (actually I never did that but loads of my mates did).

Occasionally we wandered up to the cliffs. And we often cycled out to Wootton or over to Charmouth where the girls were more friendly. By the time we got home for tea we were pretty well exhausted.

It’s surprising what pleasure you can get from unambitious pursuits. Take the Lym Valley Scouts, for example. I popped down to the Cobb last week with Francesca to watch their attempts to row their cardboard boats across the pool at the Cobb. Surprisingly, they all made it but there was a determination at the end to make sure some of them sank.

They had great fun doing so, attracted a big crowd and hopefully appreciated that you don’t have to be sat in front of a computer screen all day to have a good time. 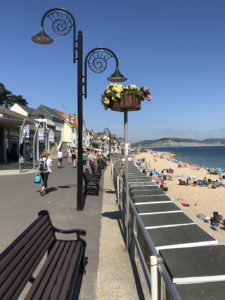 THE heatwave (or summer as we used to call it) has caused all sorts of problems for gardeners – so hats off for the town council’s gardening staff for their efforts to make the town look so nice for the summer visitors.

I hear lots of rumours about the outside staff not being happy with life, but it certainly doesn’t show in their horticultural skills. The flower beds are looking great and the basket displays around the town give Lyme a real holiday feel, despite the scorching weather.

There have been a few adverse comments on Facebook (when isn’t there?) about the baskets on poles in the town centre and along the seafront, but I quite like them and it keeps them away from the dogs.

It got me thinking about the days when Lyme entered the South West Britain in Bloom awards with some success in the early days. Being successful in Britain In Bloom can be a tremendous tourist attraction.

When I was editor of the Sidmouth Herald many years ago I ran a promotion for people from Harrogate in Yorkshire, winners of the big town Britain In Bloom to visit Sidmouth, and a reciprocal arrangement whereby the people from Sidmouth, winner of the small town competition, visited Harrogate. It was a tremendous success and friendships were established which still exist today.

Lyme also ran its own bloom contests for many years with prizes for various classes to reward gardeners for making the town so colourful.

I think it would be a good idea if we could revive this with the intention of eventually trying to enter the Britain In Bloom competition again. It might mean that the council would have to invest in a bit more labour during the peak growing season, but they can afford it and I think it could generate great community spirit.

The village of Beer enters the competition every year and has been wonderfully successful. Watch these columns for news of how we make kick-start this in the next few weeks.

THERE were few dry eyes at the Woodmead Halls on Sunday afternoon when past and present pupils of the much-admired Lyme Regis Ballet School honoured their long-standing and iconic principal Jill Chase, who has finally decided to hand over the reigns after 42 years.

Jill, one of Lyme’s most elegant ladies, had a lifelong mission of making ballet accessible to the masses and hundreds of young people – and now not-so-young – were given that opportunity.

Lyme Ballet School is now in the capable hands of Freya Lovett, one of Jill’s former pupils. Jill was loathed to stand down as principal until she found someone with similar ideals and with a passion for dance. Freya fitted that bill ideally.

From tiny tots to elegant young ladies, generations of Lyme dance enthusiasts have benefited from Jill’s wise counsel and generous nature. They will miss her greatly – and she them.

LYME Regis Town Council has agreed the use of a car parking space at Woodmead Halls to run a trail for a hybrid car-share club. […]

LETTER: Well done to all involved in ‘Sea What’s There’ event

CAN I just say how impressed I was with the very interesting and informative evening at the Marine Theatre ‘Sea What’s There’, comprising four excellent speakers presenting to a packed house on different aspects of plastics pollution in our rivers and seas, together with the ongoing stakeholder inclusive management of the Lyme Bay Marine Protection Area. […]

THIS is what we find regularly on our early morning swims on the front beach. […]