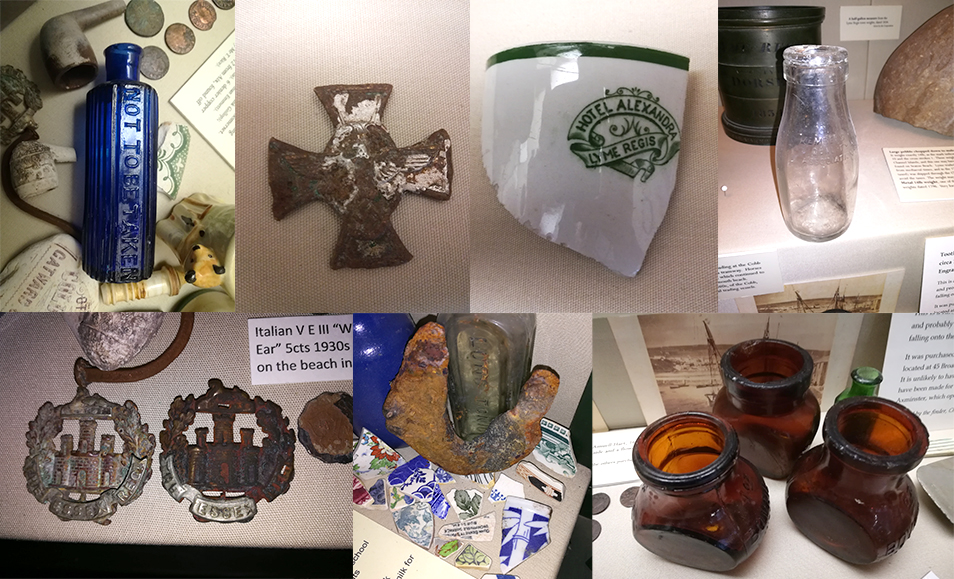 ONE of Lyme Regis Museum’s most unusual displays comprises some of the weird and wonderful things that have been found in the Lyme Regis tip.

More seasoned readers will remember the tip, which was situated off Spittles Lane, to the east of the town and finally closed in 1974.

In photos of Lyme, evidence of the tip can sometimes be seen as a trail of smoke rising into the sky.

As local people and fossil hunters know, rubbish from the tip is often found beyond Church Cliff having eroded onto the beach from the cliffs above.

Although they were dangerous places, ‘old school’ tips were great fun for kids in the past. I remember in the early 1970s scrambling down steep earth banks and playing in the hazardous wrecks of rusting and twisted cars. Pretty stupid behaviour in hindsight.

Our tip collection has built up from the finds people have dropped off after hunting for fossils. The vast majority of the objects are likely to be post 1945.

Several military cap badges have turned up, included two for the Essex Regiment. We’ve also discovered a pre-war, German police medal awarded by the Nazis. One can only assume someone’s badge and medal collection was discarded.

The material really is diverse, including fragments of crockery from the Alexandra Hotel; an 18th century horseshoe; a ridged, blue cobalt poison bottle; and a fragment of false tooth and gum, probably made of resin and porcelain.

It’s surprising that we don’t find more false teeth on the beach, as late as 1968, 79 per cent of Britons over the age of 65 had no natural teeth.

There also seems to be a significant number of Marmite bottles which must have been the consequence of the 50 per cent of people who can stomach it!

Our geologists have discovered fossils on the beach amongst the rubbish that are 200 million years older than anything that lived in our warm, Jurassic seas.

The solution is obvious, at some stage a fossil collection was discarded in the tip at the top of the cliff and over the years slipped down onto the beach. Either that or someone was trying to confuse our team.

But it’s not the most unusual object the beach has produced.

In 2012, my first summer in Lyme, I met a man walking up Broad Street. My blood ran cold when I saw what he was carrying.

He reassured me that he knew it was a Mills Bomb, the standard hand grenade of the British Army for over 50 years and he’d been in the Swedish Army for 20 years.

His find was obviously lacking a fuse and had been converted into a crude money box and still had a pre-decimal penny wedged inside it.

I know who now owns the grenade, and I have hopes that the current owner will give it to the museum.

Lyme’s tip has even made it to national TV. Back in the noughties the TV series ‘Coast’ ran a feature on Lyme’s tip.

Lyme shows off its history for visitors from Virginia

LYME Regis welcomed a visiting party from Virginia last week, as they toured towns and cities in the UK connected with the birth of America. […]

IN the first of a series of articles marking Lyme Regis Museum’s 100th anniversary, director David Tucker shares the history behind the building and how it has developed over the years into one of the town’s leading visitor attractions… […]

WHILST Victory in Europe Day (VE Day) marked the end of the war in Europe in May 1945, many thousands of Armed Forces personnel were still engaged in bitter fighting in the Far East. […]