I HAVE long been a great admirer of the town council’s gardening staff, who often have to work under difficult circumstances.

Not so long ago I wrote in this column that I had never seen the town cemetery looking in such good order and the public gardens and seafront floral displays have been admired and praised by many.

Before lockdown (I wonder how many times I will be writing that in the future), LymeOnline was planning to relaunch the town’s popular garden competition, which ceased several years ago.

We had even arranged for a sponsor to meet the costs of trophies and prize money and had provisional discussions with the council on how they might be able to support the initiative.

Then along came COVID…

In recent times, many local towns have upped their game when it comes to floral decorations during the summer months. Lyme is as good as most, with the exception of Sidmouth, which has won many prizes in the national Britain In Bloom competition over the years.

Back in the distant past when I was editing the Sidmouth Herald (now a shadow of its former self) I organised reciprocal visits between Sidmouth, winner of the small town Britain in Bloom award, and Harrogate, winner of the large town category. It was hugely successful and led to a number of friendships being created between those with a love for horticulture.

I am not suggesting that Lyme should be entering the Britain In Bloom contests, although the town did at one time and won a number of minor awards. However, from small acorns…

Reviving the local floral competitions, I think, would receive great support from gardeners and traders and encourage greater pride in our town.

Prizes would be awarded in various categories covering all sections of the community and it might be possible to involve local school children in the project.

The idea would be to form a local committee of green-fingered volunteers to get things moving when life returns to normal.

I’m hoping to meet with Councillor Reynolds, chairman of the Tourism, Community and Publicity Committee, soon to discuss how the council may be able to assist. It would be good publicity for all concerned.

They’re going Wonka nuts down at the Cobb

Hardly a week passes when one of the national Sunday papers does not give a generous mention on their holiday pages to Lyme and, as we report on page one, the town continues to attract film crews looking for that special location.

There is great excitement down at the Cobb over the forthcoming filming of scenes for a new adaptation based on characters created by Roald Dahl in his novel ‘Charlie And The Chocolate Factory’.

The steam drifter ‘Lydia Eva’ chugged into Lyme this week and will feature in a snow scene at the Cobb – although filming itself is not expected to take place until next month.

At last the BIG Breakfast will go ahead

AT LAST! Having had to cancel on two previous occasions due to the epidemic, the Lyme Regis branch of Cancer Research UK will be staging their popular Big Breakfast this Friday (September 24).

The doors of the Woodmead Halls will open at 8am for the early risers and they will be serving a full English, bacon baps and sausage sandwiches right through to 1pm.

It is not necessary to book – just turn up.

This will be the first event by the Lyme branch since February 2000 and they are hoping that their usual supporters will turn out in force.

Vegetarian and gluten free options will be available. 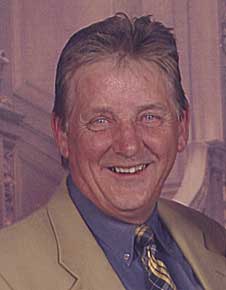 It’s the way Jimmy told them…

IT was with great sadness that I read in the Sunday Times that Yeovil-based comedian Jimmy Quinn had died, aged 75.

I knew Jimmy well and had booked him to appear at a number of sporting dinners I have organised down the years in Lyme and elsewhere.

The last one was three years ago when he was the main guest and speaker at a fundraising dinner at Lyme Regis Football Club in aid of Uplyme and Lyme Regis Cricket Club.

Jimmy had lived in Yeovil from the age of 15. He was a good footballer and at one time captained Yeovil Golf Club.

As those who were present at his last Lyme Regis appearance will remember, he was a very funny chap.

He was a Falklands veteran who kept his shipmates’ morale high when they were under attack by telling jokes, experience he put to good use in civvy street when he worked the comedy circuit for many years.

It would have been nice to report that he died peacefully surrounded by his family. In fact, he died from pneumonia back in February not long after a coronavirus outbreak in his care home.

His family were only allowed to visit him behind glass screens and had to sell his home to pay for his care.

His daughter Natalie was quoted in the Sunday Times as saying: “He suffered a horrible end to his life in a nursing home.”

It was alleged that staff were seen close to him on New Year’s Eve while not wearing masks. An investigation has been carried out into claims that Jimmy was left with bed sores for more that 12 hours without being moved, despite being very high risk.

VOLUNTEERS will be collecting in Lyme Regis for the Marie Curie Great Daffodil Appeal on Saturday, March 26.  […]

ONLINE bids for a charity auction hosted by the Rotary Club of Lyme Regis have opened today.  […]