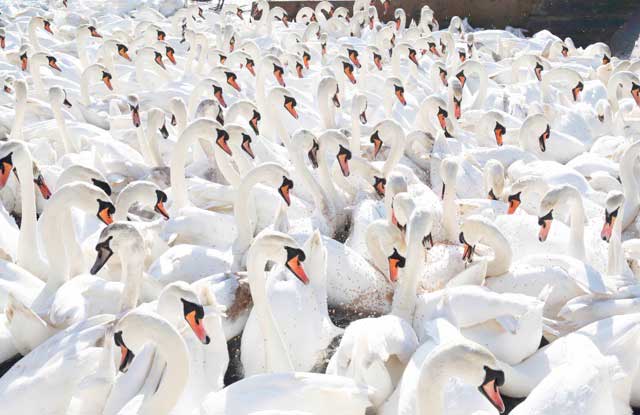 IT’S that time of year again, early spring and the birds and wildlife in general are getting into the reproduction mood, especially the swans at the Abbotsbury Swannery in Dorset.

This week will see the staff putting out bundles of reeds for the swans to build their nests. The swan numbers are about 700 but will thin out a little as some swans nest elsewhere, away from the colony.

The swans are looking in first class condition and the male swans (cob) are becoming territorial, leading to violent bouts of fighting for the females (pen) and space around their chosen nesting site.

Abbotsbury Swannery is the only managed colony of nesting mute swans in the world. It is situated near the village of Abbotsbury in Dorset, where the fleet lagoon is protected from the weather of Lyme Bay by Chesil Beach, the longest pebble beach in the world.

The colony can number more than 600 swans with about 150 nesting pairs.

Written records of the swannery’s existence go back to 1393 but it probably existed well before that, and is believed to have been set up by Benedictine Monks in the eleventh century.

Bringing together all the elements for the perfect picture

IT makes you feel it well worth following through with a planned idea for a photograph on the beach at Charmouth when you get a snap like this. […]

A PHOTO montage image, such as this, before the digital era would have been practically impossible. […]