GREAT concern has been expressed in Lyme Regis this week over the future of the town’s award-winning Tourist Information Centre.

To be honest, there has been a question mark hanging over the TIC ever since the town council announced they were giving notice to West Dorset District Council to vacate the premises. The reason? Because the council needed ground floor access facilities for those in wheelchairs who are unable to get to their first floor offices.

The TIC used to be owned by the town council but it was sold off to West Dorset District Council who entered into an agreement to rent the Guildhall Cottage premises. When the district council was amalgamated with Dorset County Council, the new unitary authority took over responsibility for the service.

They were issued a notice to quit the office in March of next year, which has since been extended to July.

The new Dorset Council, facing budget deficit if £12million, has now launched a consultation process over the future of the TIC which loses £87,000 a year, offering three options: to close the service altogether; to install a touch screen self-service capability; and to consider continuing the service through volunteers.

Most people have come to the conclusion that one way or another, the TIC will be closed and staff made redundant. A campaign on social media is encouraging the public, particularly the trading community, to oppose the closure.

There is no doubt that the TIC provides an excellent service and the staff have won great praise from the community. Its closure could make life very difficult for users like the Marine Theatre who depend on the TIC for providing a booking service.

Lyme Regis Town Council is at loggerheads with Dorset Council over the potential closure, with town clerk John Wright making a lengthy statement on how the current situation has been reached and defending the town council’s actions. The town council issued the notice to quit only after discussions on the subject broke down.

One suggestion put forward in the past was for the town council to provide an information desk at their new ground floor offices in Guildhall Cottage with an outreach desk in the Jubilee Pavilion on the Marine Parade. It is also argued that with the increase use of social media for accommodation booking and local information, a tractional TIC is now an extravagance.

This is obviously a worry for the excellent TIC staff who have won several awards over the years for the quality of their service.

It is to be regretted that the relationship between the new unitary authority and the town council has been strained so early in the life of Dorset Council.

There are very few traditional TICs in Dorset and neither Dorset Council nor the town council will want to continue financing the service to the tune of £87,000 a year when budgets are under such scrutiny.

It certainly looks like this is the end of the TIC as we know it and there will be great sympathy for the staff who have run the facility so well.

Thank you for your support

THIS is the last issue of LymeOnline for 2019, an appropriate time therefore to say a heartfelt thank you to all the local traders who have supported us this year.

LymeOnline – with 50/60 stories from Lyme, Charmouth and Uplyme in every issue, continues to be well received. I doubt whether there is a community with a similar population to Lyme which has such comprehensive news coverage.

Alas, the days of local newspapers as we used to know them are over, mainly due to the explosion in the digital world and the popularity of social media.

We run LymeOnline as a community, non-profit-making enterprise and as such we rely on a few generous businesses that support us as sponsors, rather than just advertisers, together with a few individuals who make the occasional donation for receiving the paper through their door. Without their help, LymeOnline would not be able to continue.

We also rely heavily on contracts that we have to edit newspapers for other publishers. My wife Jackie looks after this part of the business, leaving our daughter Francesca to work her cotton socks off editing LymeOnline with minimal help from myself. Our elder daughter Zoe, who lives in Ireland, helps out on the technical side when the need arises.

Publishing a fortnightly newspaper alongside a website seems to work well and we are very excited by our new platform called Sights & Sounds, in which we will be doing more video news, podcasts, live news and sport bulletins next year.

We would also like to thank our loyal readers for being so supportive and those who do the door-to-door deliveries. We hope you all have a wonderful Christmas and a happy New Year.

I went and it was just great

‘ARE You Going to the Marine?’ Well, I did, and it was a cracking night!

This was the title chosen for the community show put on to celebrate the 125th anniversary of the Marine Theatre, brilliantly written by son of Lyme, actor and scriptwriter Andy Rattenbury (pictured left on stage).

Amazingly, 91 people took part in the three-night sell-out production, staged not by the Marine Theatre staff but a group of individuals known as the community players.

It’s important to point this out as there were some raised eyebrows when an application was made to the town council to help fund the show, which was turned down. The Marine Theatre relies on a major grant from the council every year and is anxious to stress that it was not asking the council for more money.

Andrew’s clever script and his professional narration on each decade at the Marine struck a cord with me. He really captured the special role the theatre has played in the social life of Lyme Regis throughout the decades. And it was good to see two of his brothers, Steve and Brian, playing the parts of the jobsworth backstage crew, adding greatly to the humour of the evening.

I’ve written many times in this column how I spent most of my courting at the Marine Theatre in the 1960s and when they got to this decade it brought many happy memories of attending the Big Beat nights.

The show included contributions from Lyme’s amateur stage organisations, the pantomime society, Lyme Regis Musical Theatre and the Marine Players, as well as charming contributions by the Lyme Regis Ballet School, B Sharp and Saxminster.

From a cast perspective, it was the biggest number of people brought together on the Marine stage and a huge success for director Georgia Robson and musical director Declan Duffy. Hats off also to the team of youngsters who kept the action going throughout with their energetic dance routines. 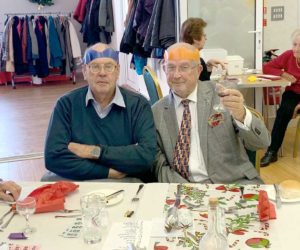 Joining in at the old folks’ dinner

THIS is the photo that has caused much amusement on social media, especially among my friends, whose comments were not very complimentary, or printable in a family newspaper.

It shows me raising a glass to my fellow pensioners attending the old folks annual Christmas luncheon at the Woodmead Halls last Saturday.

To attend you have to have reached a certain age. I would have gone last year but we were visiting our grandchildren in London. So I jumped at the chance of making my debut this year.

Mrs E declined the invitation to accompany me, pointing out it would be many years before she was old enough to attend.

Sitting alongside me is fellow Lyme boy Ken Gollop, looking rather glum. One comment I saw on Facebook was “so would I if I had to sit through lunch next to you”. Thanks for that.

In one way or another, I’ve been connected with this event for many years. Back in the 1970s it was organised by the Regatta & Carnival Committee when I was the secretary. It’s always been one of my favourite Christmas events but for some reason – I know not why? – a lot of my friends of a similar age are reluctant to be seen at this gathering of Lyme’s senior citizens.

In his speech at the lunch, Lyme’s-young-at-heart mayor Brian Larcombe quipped I had been recruited for the organisers’ new youth policy.

Next year I’m planning a table of ten for all those who have been so rude to me this week.

Well done to committee chairman Owen Lovell and his team for organising the event, some of whom are old enough to be sitting down themselves.

LYME Regis district and county councillor Daryl Turner has said he does not think residents will notice many changes as local government reorganisation takes place over the coming months. […]

Trio of world class actors star in ‘The Lehman Trilogy’

‘THE Lehman Trilogy’ is a story of a family and a company that changed the world, told in three parts on a single evening broadcast from The West End to the Marine Theatre in Lyme Regis. […]

OUR new council administration started its new five-year team this week. The town took to the polls on May 2 to elect 14 councillors from the pool of 16 candidates, with a turnout of 44.56 per cent. […]