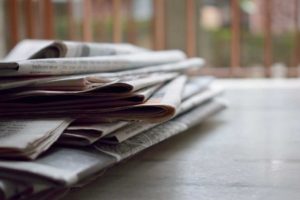 I AM a news junky, I admit. Ever since I started work as a cub reporter in 1965, I have been obsessed by the daily news agenda.

I’m an avid reader of national newspapers (of all political allegiances) and watch every news bulletin I can, from breakfast TV to ‘Newsnight’.

Wherever I might be, I almost always buy a local newspaper. On holiday I insist on getting the overseas version of our national papers and have even been known, much to my wife’s annoyance, to buy a paper whilst on holiday, though it’s in a language I cannot speak!

During the Second World War, the BBC was only allowed to broadcast just 15 minutes a day. Television was still very much in it infancy so the nation had to rely on radio to inform the populace on the progress of the fight to defeat fascism and indeed to boost morale.  But it was subjected to a great deal of censorship, strictly controlled by the Ministry of Information.

Millions crowded around their radios on September 3 1939 to hear the Prime Minister Stanley Baldwin, the first PM to master radio, announce: “This country is at war.”

Press censorship in the Second World War worked on a principle of self-enforcement. Newspapers were issued with guidance about topics that were subject to censorship and invited to submit any story that might be covered by ‘Defence Notices’.

Submitted stories would be scrutinised by the censor and redacted. Any information of potential military significance – from weather reports, to the exact location of troops – would be removed.

The relationship between the government and the media has changed greatly since those days with 24-hour rolling news very much a part of our daily life.

Television coverage of conflicts in far-off places came into its own during the Falklands War. Who can forget Brian Hanrahan’s commentary when he reported: “I counted them all out and I counted them all back.”

There are still certain restrictions that have to be adhered to during conflicts but, today, reporters are often imbedded with military groups on the front line and with the march of technology they can be sending those images of our troops in action all around the globe.

They now get closer to the action, and not relying on briefings, and being a war correspondent has never been more dangerous and many have been maimed and killed.

We are not at war now, although the government is operating on a war-like footing. But we do have an enemy – a vicious fast-spreading disease. An enemy we can’t see. An enemy we have to beat.

I watch every coronavirus bulletin from No 10 in afternoon and I’m intrigued with the relationship between the government spokespersons and the media. It is very evident that the politicians treat the questioners with a great deal more courtesy than their inquisitors do to them.

It’s got to the stage when some of the questions are bordering on the ridiculous and I’m not sure that the daily conferences are achieving a great deal.

As a journalist for more than 55 years with experience at a national level, I am a firm believer that politicians who control our lives are held to account over the decisions they make, especially on matters where lives are at stake. But in a crisis like the one we are experiencing now, I do believe the press also has a responsibility not to create unnecessary fear.

And there is no doubt the fear factor is growing by the day.

I’m afraid, however, that with the barrage of information we receive via rolling news, coupled with the negativity continually perpetuated by the level of inaccuracy on social media, the morale of the nation will decline even further.

And in these difficult times, I abhor the scoring of political points among politicians. The performance of Shadow Foreign Secretary Emily Thornberry on the BBC’s ‘Question Time’ demonstrated she was more interested in Tory bashing than contributing anything positive to the fight to control the virus.

Scare stories will abound. Last evening there were reports on Facebook that someone from Bridport suffering from COVID-19 had died. We were unable to get confirmation of this but we can expect more of this locally.

Locally, it would seem more and more people are adhering to the government’s plea to stay indoors. I took my daily exercise walk along the seafront a little later today, accompanied by Mrs Evans, studiously sticking to the two metre social distancing rule – and there were very few promenaders and fitness enthusiasts taking advantage of the glorious sunshine. And I only saw three cars pass through town.

Today both local councils are closing the cars parks in the town in a bid to stop people making unnecessary journeys. It will be interesting to see how they police this. There were certainly no signs out earlier today.

I’m taking a day off tomorrow as it’s Sunday so no diary – but I will be back again on Monday for my Day 14 entry.

But here’s a question for you to muse over – how’s Brexit going? Is it done yet?

UP to 150 community pharmacies across the county are to be given access to health and social care records held within the Dorset Care Record (DCR).
[…]

LETTER: Protect others and wear a mask

I GO into the Tesco in Lyme at 7am as I want to avoid people and stay as safe as possible. […]