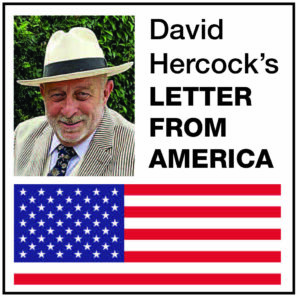 A LONG way in ways I could never have imagined when I left 3 Jericho and the Skylark at 26 years old for a new life as a married man in the USA.

I must admit, back then in 1983, the US was a promised land. I was excited, and within a few years of starting my new life I was earning a good living and became the proud father of a “rich man’s family” a daughter and a son.

They even wrote a song about those days: “The Future’s So Bright (I Gotta Wear Shades)”. Ahhhh, the 1980s.

Fast forward into a new millennia. Finally the kids college debt is paid off,  a change of career from private industry into public education, and although I was promised that I would contract all kinds of nasty illnesses from the Petri dish they call school I kept remarkably healthy.

Yes, I thought, this is now my time and the chance to do all the things I wanted to see and experience that as an impecunious young lad in Lyme was well beyond my reach.

The feeling in the USA had slowly been changing since the turn of the century. Soon things started to feel very different to me; August of 2017, Charlottesville VA. The stain on America’s past had only lain hidden under a thin veneer and again raised its ugly head.

Anytime there are Nazis on one side it’s sublimely easy to understand which side is in the wrong; the president’s ‘healing’ words were to say “there were good people on both sides”. Approval, if not encouragement, of the path to 2020 and the steps of the Capitol had begun.

Personally 2020 started with so much promise.  My school orchestra had ended 2019 with the most beautiful Christmas concert. We were excited to start rehearsals in January for what promised to be a wonderful spring concert.

I remember hearing on the radio during my drive into work of a new virus in China that was becoming very difficult to contain. Though the WHO was hesitant to consider that a local epidemic could become any sort of pandemic. It’s strange to think back, but I recall it left a nagging feeling in me.

By February my friends and fellow teachers were talking about how this Covid thing was looking quite disturbing. I had to teach an evening class on the day of my birthday. Somehow my students got wind of the big day and surprised me with donuts, chocolate and bottles of non-alcoholic sparkling cider. It was a very special celebration.

Little did I know it would be the last social gathering I would experience for an entire year and for the foreseeable future. Less than a month later my school district would switch to fully remote learning.

No one was ready for the single largest change education had ever experienced. New software programs were learnt and mastered as they were used in that same days online lessons, new terms became everyday language.

We hoped we could get through the next few weeks of lockdown and still be back in time to enjoy our spring concert and bid farewell to the graduating seniors.

Yeah right, infections increased, more people died, the R rate continued to increase. It became apparent that we might not even return to teaching in school in September.

2020 stole so many little things from us.

Life became very mundane. Not being able to go out to dinner or visit one of the many micro-breweries surrounding me I needed to find something to occupy me. Given the time of year and the fruit that was in plentiful supply I chose mixology. It did require the sacrifice of a brain cell or two but it was all in the name of learning and discovery.

Summer came and went. No one went anywhere. People continued to die in increasing numbers, infections grew. The White House and many in Congress decided to reopen the economy. Black men, women and children died at the hands of those who swore to protect and to serve ALL Americans.

I was shocked as I watched a policeman kneel on a man’s neck and saw the life choked out of him on national TV.

That knee seemed to represent the knee of over 200 years of oppression, the country woke up and thousands of Americans protested the injustices suffered by non-whites. Some protests broke out into violence against property and people as armed right wing groups defended their right to protect the sanctity of white society and their ordained position of supremacy.

Without any direction from the national government, States did their best to create hoped for solutions to both the social unrest and the pandemic. Some with greater success than others.

In September we went back to teach in school. We’d had many Zoom meetings over the summer to come up with a plan for which no one had any knowledge or experience.

We settled on a hybrid system with 1/3 of students choosing to remain fully remote, 1/3 in person on Monday and Thursday and 1/3 in person on Tuesday and Friday. Wednesdays would be remote for all.

Mandatory mask wearing and temperature checks on entering the building. One-way systems with social distancing and cleaning desks between classes. High touch areas such as door handles would be disinfected constantly throughout the day.

As teachers we are used to working in an environment where unwashed grubby hands touch anything after touching ‘everything’.

But this was different. This time lives would be at risk.

*Look out for part two of  “Letter from America” in which Lyme-born David Hercock, who started a new life in America in 1983, describes his horror as the Capitol Building was invaded.