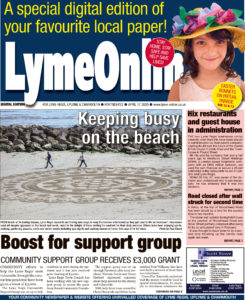 “HOW are we going to fill the paper when there’s nothing but bad news, all local events have been cancelled, there is no sport and the town council has gone into hibernation?”

That was the question Francesca and I discussed when we went into lockdown. I remember saying, “don’t worry we will come up with something”. And we have – and very popular two of our new features in the digital version of LymeOnline have been.

We were already struggling to fill the sports section due to the prolonged period of bad weather we were experiencing before coronavirus raised its ugly head, so I came up with the idea of writing a piece about how well Lyme Regis Football Club had ben served by goalkeepers over the years.

It actually turned into a two-piece feature as I had missed out so many names in the first article and had to pen a second one so everyone got a mention. That was several weeks ago but I still get the occasional text or email saying “you missed me out, I played in goal for Lyme”.

When the virus really took hold and we had to suspend the printed version of LymeOnline, we reduced the number pages to 18. Local football was ended for the season so that gave us a good story for the back page.

I then turned to my life-long friend Stuart Broom to see if he would like to write a feature on how he fell in love with football and his home-town club, knowing full well he had an elephantine memory about the sport which has dominated both our lives.

Stuart and I have been mates since primary school days when we played in the same football team for St Michael’s Primary School, under the tutelage of schoolmaster Bill Creber, before going on to play for the 1st X1 at Lyme Regis Grammar/Woodroffe School and Lyme Regis Football Club.

We also played for West Dorset’s Schools in the same side as Bridport’s Billy Balson, who went on to play for Exeter City before moving to the United States.

Stuart was always a big lad and was one of those hard to handle centre forwards and he soon made his name in the senior game, going on to captain the Lyme 1st team for 12 seasons and scoring more than 200 goals.

Stuart jumped at the chance of writing the feature but it soon emerged that it would turn into a bit of a series. Part one was extremely popular, becoming one of the most read articles on our website. Part two is now up on our website and receiving good hits and there’s likely to be two more episodes.

That will fill our sports pages well into May when at first we thought the lockdown would be over. It’s clear that’s not going to happen so we need to get our thinking caps on to come up with further space fillers with local sport still moribund.

I’ve got some great memories of my days with Uplyme and Lyme Regis Cricket so I am hoping to write a series about my cricketing days both as a player and club chairman, memories which have provided me with material for numerous after-dinner speeches at sporting club dinners over the years.

Old photos always cause a lot of interest in local papers so we decided to introduce a new page during this lockdown period with pictures of local people enjoying themselves when they were younger.

The first one in last week’s digital edition included photos of the Regatta & Carnival Committee at a Miss Lyme Regis Ball in the early 1970s, former landlord Joe O’Donnell celebrating a pools win of £17, Dave Austin and Philip Hodder in the pram derby, dressed as mother and baby, and Geoff Baker on a cross country run when he was at school. Not sure that last one represented having fun, but I couldn’t resist publishing it.

So if you have any photos of you and your mates having a good time, email them to us at edit@lyme-online.co.uk so we can all have a bit of a laugh during these difficult days.

With the council out of action for the time being, we thought it would be a good idea for our readers to put questions to the Mayor, Councillor Brian Larcombe MBE.  We have not exactly been inundated with these, which means one of two things, I suppose – people are generally happy with how the town council is running the town or they couldn’t care a jot about local government. You decide which. But please keep your questions coming.

I’ve tried to limit the politics in today’s diary entry just to give you all a break, but I would like to say thank you to all those who responded to my piece yesterday on how morale was being affected by the negativity of the national press. It’s clear I’m not alone in this thought.

Although Nicola Sturgeon gave an indication of how Scotland would come out of lockdown (I bet Dominic Raab was pleased about that), it is clear that the government will not be persuaded to do likewise until the number of deaths start to fall at a steady rate.

The gist of what Sturgeon came up with was hardly earth shattering, however. Schools to go back first, then some shops etc, etc. Nothing revolutionary there then, certainly nothing that our own government has not considered in their planning for the lifting of measures.

Health Minister Matt Hancock stressed yet again yesterday that they would not reveal the government’s plans until the number of cases and deaths subside and there is no fear of a spike when life starts to return to normality. The message stays the same: “STAY HOME – PROTECT THE NHS – SAVE LIVES”.

So why does the increasingly annoying Laura Kuenssberg, the BBC’s Political Editor, insist on asking the same question about revealing the release of lockdown at every Downing Street press briefing. She’s always going to get the same answer until the statistics improve, which we hope is now far away.

Kuenssberg, who is highly regarded by her industry colleagues, interviewed Nicola Sturgeon on her decision to have a “grown up” conversation with the Scottish over the lifting of measures.  She asked the Scottish Minister that if she wanted a grown up discussion and the Cabinet was clearly not going down this route, did she feel the government were acting like children, or something of that nature.

That was a new low in political interrogation – even for Kuenssberg.

And to end this epistle, another pat the back for the people of Lyme and Uplyme for the enthusiastic way they turned out again last evening to clap for carers. It seems to get louder every week.

One thing about the clapathon that has got me thinking: how long should we be clapping for? In our road, after a few minutes we seem to be looking up and down to see who will be the first one to stop!

There is no doubt in my mind that those who are on the frontline in the battle to defeat this disease are truly appreciated by those of us who marvel at their commitment and bravery.

Didn’t William Shakespeare once write: “I can no other answer make but thanks, and thanks, and ever thanks.”

LYME Regis businesses are getting back on their feet following the coronavirus lockdown. Here’s how the popular Pilot Boat – the town’s biggest bar and restaurant – has adapted to meet all the necessary safety requirements for both staff and customers.  […]

Is it time to rethink how news is presented in times of crisis?

I AM a news junky, I admit. Ever since I started work as a cub reporter in 1965, I have been obsessed by the daily news agenda. […]

Bags left next to recycling banks will be treated as rubbish

IF you are looking to donate items such as clothing using a recycling bank in a car park, Dorset Council is asking you to keep hold of them until the current pandemic has passed. […]