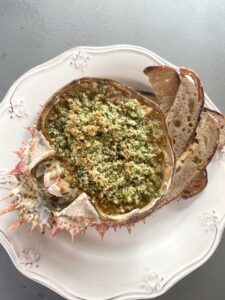 Serves 4 as an appetiser

If only I knew what I was doing as a kid, throwing those ugly looking spider crabs out of the net back into the water.

My friend Nigel, who makes bespoke fishing nets, does a bit of part-time potting for crabs and also discriminates against the ugly ones. But he is an old hand and, instead of throwing them back, sells the spider crabs to an export company which in turn sells them to Spain.

Which is where, in fact, I came across a similar dish to this, at a fish restaurant in St Feliu de Guixols, near Palamos on the Costa Brava. I’ve always been inspired by trips to Spain, where the food is simply cooked with good local ingredients.

Spider crabs are hard to come by in this country, as we export the majority of them. They can be bought cooked, although you will probably need to order them in advance.

To cook them yourself, just plunge them into simmering salted water for about 15 minutes per kilo, then remove them from the pan and allow to cool. Cooking fresh shellfish can sound daunting, but it really is worth the effort.

You can use ordinary brown crab in this dish, but if you do come across spider crabs, buy them, as the meat is sweet and worth the trouble.

Half onion, peeled and finely chopped

1 clove of garlic, peeled and crushed

50ml fish stock (a stock cube will do)

Juice of half a lemon

To get the meat out of the crab, twist the legs and claws off, then crack them open and remove the white meat. Now turn the main body on its back and twist off the pointed flap.

Push the tip of a table knife between the main shell and the bit to which the legs were attached and twist the blade to separate the two, then push it up and remove. Scoop out the brown meat in the well of the shell and put with the leg and claw meat.

On the other part of the body remove the dead man’s fingers (these are the feather-like, grey gills attached to the body) and discard. Split the body in half with a heavy knife.

Now you need to be patient and pick out the white meat from the little cavities in the body. Add this to the rest of the meat.

Gently cook the onion, garlic, ginger and chilli in 10ml of the olive oil until soft. Add the sherry, fish stock and brown crab meat, stir well then add most of the breadcrumbs (reserving a few to scatter on top), half the lemon juice and season to taste. Simmer for 15 minutes stirring occasionally.

Blend one-third of the mix with the rest of the olive oil in a blender, then stir it back into the mixture along with the spider-crab meat. Add more lemon juice and seasoning if necessary.

Spoon the mixture back into the shells or an ovenproof serving dish and scatter the rest of the breadcrumbs on top. Lightly brown under the grill or in a hot oven. Serve with thin slices of toast.

Free Christmas lunches available for those in need

A FREE Christmas Day dinner is on offer to anyone in need in Lyme Regis this festive season. […]

A LOCAL, online, ethical food shop launched in Branscombe during the COVID-19 pandemic has now started a home delivery service across East Devon and in Lyme Regis. […]

LYME Regis Foodbank continues to support an increasing number of people each month, with many facing financial difficulties due to the current coronavirus pandemic. […]