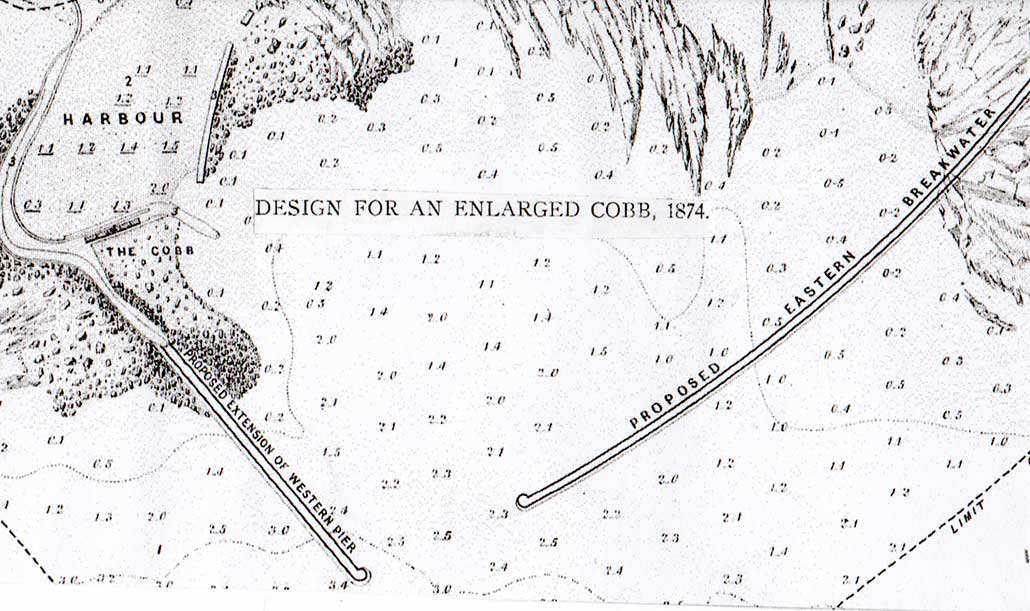 THE Great Gale of November 1824 left the Cobb in need of extensive repairs and major reconstruction.

The task once again fell to George Fanshaw (now Lt., Colonel) of the Royal Engineers. The work commenced in April 1825 and was completed in November 1826.

It was a lengthy and expensive project requiring the repairing and rebuilding of some 232 feet of pier and 447 feet of parapet at a cost of £17,377.

On the instructions of the Duke of Wellington a commemorative plaque (cost not to exceed £7) was installed in the arch of the Gin Shop. This alcove with its two flights of stairs leading to the upper walkway was built to Fanshaw’s design.

An earlier recess probably existed to house a three-legged crane known as a Gyn, it would have been used for lifting heavy blocks of stone, for pile driving and for the placement of guns.

The Fanshaw repairs provided for Portland cap-stone to be laid in courses, they were united with iron-bolts let down into the blocks, each block bound to the next by dovetails of sturdy oak.

Despite the problems of past, poor general maintenance was again highlighted in a report of 1831 which stated that the inspecting officer found ‘rents and openings on the paving of the sea wall, some of which he was able to get his foot in.’

A letter in the Sherborne Mercury complained that the Cobb masons ‘spent much of their time in idleness.’ However, in 1834 a raised carriage way was constructed to allow carts to access to the quay at all states of the tide.

1842-43 saw Crab Head extended by 100 feet, it was renamed The Victoria Pier in honour of the Queen.

1846 saw yet another gale which caused considerable damage to a new northern wall being built to replace the one badly damaged in 1824.

History repeated itself in 1854, during yet another gale vessels were sunk or driven out of the harbour, the shoreline was littered with wreckage. Some half a mile of tramlines used for conveying limestone from the cliff quarries to the quay was destroyed. Constructed in 1853 they were partly on wooden piles, the remains of which can still be seen today close to the curve of the inner wall.

Severe weather in the years 1857 and 1867 caused further damage to the Cobb and shipping.

In 1874 there was an ambitious scheme to enlarge the harbour by enclosing an area of some 75 acres. It included 1,000 foot eastern breakwater extending from below Church Cliff and also a lengthy extension of the western pier.

The concept was impractical and with an estimated cost of £50,000 it was a non-starter.

The outline of the Cobb has changed little since the 1850s, a major change was the earlier construction (1750s) of a causeway linking it to the shore for the first time.

Over the centuries the Cobb has resisted the might of the sea, it is Lyme’s umbilical cord that unites and binds the town to its maritime heritage and its very existence.

WITH the understandable emphasis that Lyme Regis Museum puts on the ground-breaking contribution to science made by Mary Anning, it’s easy to overlook the mark left on the world by Thomas Coram, the driving force behind England’s first charity, The Foundlings Hospital. […]