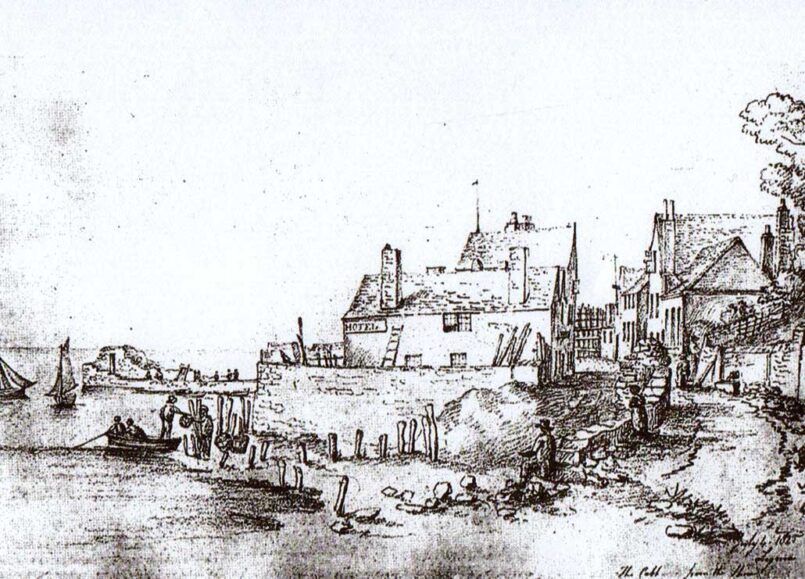 THE continuing story of the Cobb is one of it being repeatedly subject to incursion by the sea. Between 1792 and 1867 gale force storms almost destroyed the structure, walls were breached and piers badly damaged.

Part of the problem was that much of the repair and maintenance work undertaken in eighteenth century was “poorly executed and speedily undermined”. If a report of 1805 by William Jessop had been acted upon much of the storm damage in the early years of the nineteenth century could have been avoided.

His detailed and extensive recommendations included a major extension of the complete structure and a larger inner harbour. The cost being £16,526 was almost certainly the reason why it was decided not to proceed, with hindsight it was to be a false economy.

In January 1817 a gale caused a formidable 190 feet breach in the wall, moored ships sunk as did several that were swept out of the harbour. Such was the ongoing problem that in 1818 the House of Commons set up a Committee of Enquiry, it was to examine the Cobb’s relevance to shipping in Lyme Bay and to consider its preservation.

James Kerridge, the master of a 120 ton Lyme coasting vessel and a harbour pilot, gave evidence on June 1. He stated that the Cobb was not only important to shipping but as a breakwater for the town. He warned that if it was not repaired “the town was in danger from the sea”.

He advised against lowering the height of the wall, stating that “in south-westerly gales the sea breaks over the wall”.

Subsequent to storm of 1817, the Board of Ordnance who were responsible for repairs and maintenance (1792- 1864) sent Captain George Fanshaw of the Royal Engineers to survey the damage and make recommendations for its restoration.

Fanshaw estimated the repairs would cost £13,224, the project was a disaster, the contractor proved to be incompetent. Matters got worse when the firm was declared insolvent, as late as 1823 the work had not been completed.

The Great Gale of November 1824 was of such a magnitude that it became part of Dorset folklore, it was described as “a marriage of wind and tide that swept the entire Channel coast, causing damage wherever it touched”.

Lyme was in its path, on November 23 the tide reached its high water five hours before high tide. The violence of the wind, the height of the tide and tremendous braking waves inundated the lower parts of the town, people escaped the flood with little more than the clothes on their backs.

Cobb hamlet was engulfed and many buildings suffered severe damage. In total 232 feet of the Cobb wall was thrown down, vessels were driven out of the harbour, some sank others were reduced to wrecks by the pounding of the sea.

George Roberts (town historian) was an eye witness and described the loss of vessels “as truly lamentable and estimated the loss to individuals at £3,000 to £4,000”. Many men had lost their livelihood and some had been drowned, families would suffer great hardship.

James Kerridge’s warning of 1818 should not have been ignored.

Seaside photo from 1938 recreated as ‘Ice Cream Wars’ rage on

A WOMAN featured in a photo taken in 1938, which has appeared in press coverage of the so-called ‘Ice Cream Wars’ in Lyme Regis, has come forward to recreate the image 82 years later. […]

Ken to give last ‘Under Shady Tree’ talk

LYME Regis resident Ken Gollop will give what is billed to be his last ever ‘Tales From Under Shady Tree’ talk on Sunday, November 18. […]

Share your school memories of St Michael’s for 190th anniversary

ST Michael’s Primary School in Lyme Regis is looking ahead to its 190th anniversary in 2024. […]