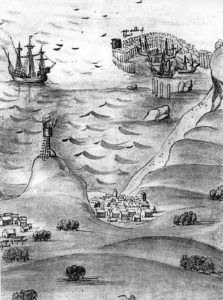 ‘FOR the Socour of Shippes’ – so worded is a 1544 description of Lyme’s famous Cobb, the first recorded mention can be traced to 1294.

For centuries it has dominated the seascape, its design and structure undergoing many changes, from a simple breakwater to a harbour. However, it is not until 1329 that we get a description of its construction, “Le Cobb built of timber and rocks has been beat down and quiet destroyed by the violence of the sea”.

The cost of repairs and maintenance was beyond the town’s means, so Edward III granted a petition allowing charges to be made for a period of five years on “all goods coming into or sent from the town by land or sea, to be applied to townsmen or not”.

In 1481, a report sent to Edward IV stated that “the port was by tempests (note the plural) destroyed”. Encroachment and destruction being an ongoing problem, the sea has never relented in its efforts to demolish the Cobb.

Over the centuries Lyme has had to appeal to the crown for funds to ensure its survival. The archives record numerous petitions for financial assistance in order to preserve the town’s vital commercial asset.

Only ‘Bloody Mary’, the Catholic Queen, stopped payments, her reason was that “Lyme is inhabited by heretics”.

A coastal defensive survey of 1539 ordered by Henry VIII gives a bird’s eye view of the Cobb and the town. The illustration shows the materials used in construction and its extended shape; the oak palisade is infilled with large rounded boulders known as cow-stones or cobble-stones. It is these stones which gave the structure its vernacular name.

In Tudor times a Master of the Cobb supervised a full-time workforce in order to maintain the works. The cobble-stones were floated into position using casks, the rocks being suspended by chains or strong rope. Such was the skill of the workforce that they were seconded to work on Dover pier.

The question often asked is why the Cobb was built to the west of the town? A geological survey of 1839 suggests that a harder portion of lias forming a blue limestone ledge, motivated the early builders. Even today, anyone walking along the top of the Cobb at low tide can see the validity of the suggestion.

Grants from the crown never provided enough money to maintain the structure, so from circa 1539 until 1612 there was a fundraising event held annually, known as Cobb Ale. It took place over a period of three weeks; feasting and drinking were the main activities, many were held in the Cobb Hall, a building of which little is known.

The organisers of the feast were dignified with the title of ‘Wardens of the Cobb Ale.’ The mayor took on the role of ‘Lord of the Cobb Ale.’ A silver chain and a precursor of a bosun’s pipe was his emblem of authority.

I end this part with the words of Daniel Defoe, the author of ‘Robinson Crusoe’. Writing in circa 1720 he said of the Cobb, “such a one as is not in all Britain, besides if there is such a one in any part of the world”.

Regatta: A long-running tradition in Lyme

REGATTA Day had its inception sometime in the 1820s, its forerunner (circa 1810) being an annual boat race. […]

LYME Regis resident Ken Gollop will give another of his popular talks on local history on Sunday, March 13. […]