IT’s not easy being a councillor. There are very few bouquets but many brickbats in being a member of the town council. Whatever we think of them, we should be grateful that they serve the community in this way giving up hundreds of hours of their spare time.

But with public service comes a responsibility to conduct themselves in a manner which shows respect to each other. In recent weeks the council has fallen well short of the criteria set down for those in public office and I believe the town in general is fed up of the personal feuds and inappropriate behaviour.

Avid council watcher Nigel Ball, always quick to praise the council when deserved but never afraid to point out their failings, the right of everyone on the electoral roll, writing to LymeOnline, says the council are setting a bad example and should make peace with each other.

That theme was also expounded when the vicar of Lyme Regis, the Reverend Jane Skinner, made her last sermon in the parish church before moving to a new benefice in North Devon, when she preached at the Remembrance service.

Choosing her words carefully and delivering them in a sympathetic manner, the Reverend Skinner said that people had to find peace in their communities and not just in countries. She mentioned the town council in this context.

I glanced over to the seven councillors who attended the service, sat in the corporation pews. There seemed little reaction to these comments. I’m not sure all of them even realised the vicar was referring to them.

I have some sympathy for the councillors, especially those who do not engage in the social media rantings, much of which is inaccurate and a good deal of it defamatory. But to steer the council back onto a more respectful course, they have to stand up to be counted and not just sit back and hope matters will improve.

They could end the rowing tomorrow if they all committed to adhere strictly to the code of conduct and come down hard on anyone who does not.

It’s time to draw a line under the family feuds and personal vendettas. Councillors don’t have to like each other. They don’t have to share a dinner table. But they must appreciate that they are all entitled to a view and be allowed to express that view without being subjected to bitterness and spite.

Some councillors work harder than others. Some of them have more to say than their colleagues. That does not give them carte-blanche to deride their fellow members.

I think one severe effect of such behaviour is the great impact on council staff. They inevitably get drawn into such squabbles and the decision making often gets clouded by personal issues. This also has an effect on the standard of debate in the Guildhall, generally low compared to councils in years past.

As Geoff Baker once so succinctly put it, this is the town’s council not the council’s town and they should never forget that. The town wants their councillors to behave in a respectful manner, pulling together for the benefit of all and not engage in frivolous pranks like producing a council nude calendar, one of the ideas put forward on social media this week (presumably as a joke?) to improve morale among members.

A warm thanks for supporting Remembrance Sunday

WITH my British Legion president’s hat on, I would to say a warm thank you to the hundreds of people who turned out for the Remembrance parade and church service on Sunday. I have never seen the church so full.

The usual programme was changed so that the two minutes’ silence was observed in The Square at the bottom of the town and many have commented of the poignancy of the occasion as we commemorated the centenary of the ending of the First World War.

The Pages of The Sea event on the main beach was also a brilliant success with many taking the opportunity of paying their own touching personal tributes to family members who served in World War One and other conflicts.

This was a day of which Lyme can be justly proud. 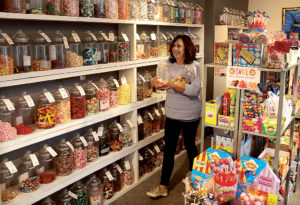 AS a kid growing up in Anning Road, we spent most of our school holidays on the playing field or down the beach.

Those were the days when our mums would kick us out early in the morning and we’d only go home when we were hungry. Occasionally we might be sent on an errand to the nearby shops – that would be Millard’s Stores in Church Street or John’s Back Shop in Staples Terrace.

And for treats there was only one place to go – Mrs Dale’s Sweet Shop in Mill Green (now a private house) where the shelves were lined with jars of aniseed balls, sherbert lemons, refreshers, liquorice catherine wheels, black jacks and a host of others I can’t remember. It’s where we spent our pocket money and Mrs Dale would always tell us to be sure to go straight home.

Occasionally we might stroll down to Nelly Cox’s in Coombe Street, part bakery, part sweet shop. There used to be a proper old fashioned sweet shop in Broad Street called George’s, now Papa Luca, run by the family of Philip George, who was one of my best school pals and who was born in Lyme Hospital a day before me. They moved to Yeovil and I have never seen Philip since.

Many years later former town crier Richard Fox and his wife Marilyn ran a sweet shop on the opposite side of Broad Street in premises now occupied by Fortnam Smith & Banwell.

Such memories came flooding back when I popped into Lyme’s new sweet shop - Lyme Rocks – situated under the Guildhall where the shelves are straining under the weight of dozens of sweet jars, many of them offer the brands that have stood the test of time.

The shop is being run by Fiona Markham with help from Heather Larcombe who were encouraged by the popularity of their new venture, especially during half term.

I have a notorious sweet tooth and find it difficult to pass Lyme Rocks without popping in. And their frozen yoghurt is just to die for – and apparently good for me. Honest doctor!

Be there, your health may depend on it

LIKE me, you are probably fed up to the back teeth of all the shenanigans in the council chamber. So here’s something which is crucial to all our lives in and around Lyme.

We know how over-stretched the NHS and social care services are becoming. So there’s no avoiding the fact that we’ll all have to do more to take care of ourselves, and to work harder at looking out for our friends and neighbours.

That’s why the ‘Drop-in to DRoP!’ event on 28th of this month is so important. It brings to one place in Lyme a good sample of the organisations and groups able to help us with caring for ourselves and for each other.

They will bring plenty of information, as well as being able to answer questions and point us towards other people who, even if not present at the time, could be useful contacts.

Quite a number of those coming to this event are based further east in the county – Bridport, Dorchester and beyond. Our corner of Dorset has suffered from being on the edge of the county; getting health and care providers to notice us and give us a fair crack of the whip is sometimes an uphill struggle.

To gather so many to the town on a late November afternoon is not an everyday occasion. That’s another reason for a good local turn out. If busy people take the time to come to Lyme and offer us their services, it would be a poor return if few people came to see them.

That certainly wouldn’t help to convey the message “Lyme and Charmouth are here and deserve equal treatment with the rest of Dorset.” If they go back east saying “Well, they’re not interested out there in the west” that would be a guarantee of more neglect, with only ourselves to blame.

So let’s wave the flag for attention when we have the chance, and fill the halls at the Baptist Church between 4pm and 7pm on Wednesday, November 28. Don’t miss this opportunity. Your health may depend on it.

Disjointed attitude of council will not resolve glass issue

IT is with sadness that I have to write to the LymeOnline to highlight the problem that the council still has with the Marine Parade roof glass. […]

CUSTOMERS of Palmers Brewery pubs will be able to ‘check in’ online to help the NHS Test and Trace initiative.  […]