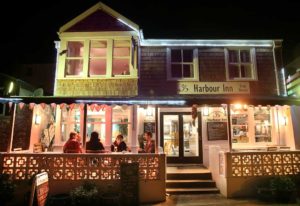 IT seems to be a year of special anniversaries. After LymeOnline celebrated its first year in business last month, this week we mark the 15th anniversary of the popular Harbour Inn on Marine Parade.

I got my first job as a waitress at the Harbour when I was 14, not long after it re-opened under the ownership of Sue Steward and her son Mark Oldfield. I was a rather shy teenager when I started; I looked about 10, could barely reach over the kitchen pass and was terrified of getting anything wrong.

Luckily, my four years at the Harbour really brought me out of my shell and by the time I left at 18 to start working as a trainee local reporter I was constantly told off for chatting too much!

I have many happy memories spending summer holidays working alongside my sister and school friends right on Lyme’s beachfront, and it’s great to see Sue, son Mark and daughter Julie still at the helm of what has become a firm favourite of the Lyme Regis foodie scene.

Also celebrating a special anniversary this year is the Marine Theatre – first built as a drill hall – which will look back at the 125-year history of the building with a special show to be staged in June.

The production is bound to be a hit, with local societies and organisations being asked to resurrect their most popular scenes and songs, intertwined with a narrative written by Lyme-born scriptwriter Andy Rattenbury.

Of course, the talk of the town this week has been all about the filming of ‘Ammonite’, which got underway on Monday. I’ve spent half the week lingering around the bottom of Bell Cliff steps to catch a glimpse of actresses Kate Winslet, playing Lyme’s famous fossil hunter Mary Anning, and Saoirse Ronan, who plays Frances Bell.

There’s been a real air of excitement around town with the filming attracting big crowds and even bigger camera lenses! I decided to leave it to the professionals and we feature photos by Lyme’s number one snapper Richard Austin in our Photo Gallery.

In between the celeb-spotting I paid a visit to Charmouth Scouts HQ last week to meet members of the Explorer branch who are getting ready for expeditions to Kenya and Tanzania.

Despite being not in the least bit practical or prepared, I was privileged to be made an honorary member of Charmouth Scouts in 2017, so I’m always happy to pop into HQ and give them a plug whenever possible.

The Explorers are really looking forward to the once-in-a-lifetime trips, where they’ll be carrying out volunteer work which is sure to make a huge difference to the communities they’ll be visiting. But first they have to raise significant funds to secure their places, so please give them your support!

Scouts get to grips with car mechanics

SCOUTS from 1st Lym Valley visited Cobb Garage in Lyme Regis over a two-week period to get to grips with the basics of car maintenance as part of the mechanics badge. […]

HOLLYWOOD actor Timothée Chalamet has been spotted in Lyme Regis this morning as filming for ‘Wonka’ gets underway.  […]

A NEW bar will make use of the space in a popular Lyme Regis café during the evenings. […]