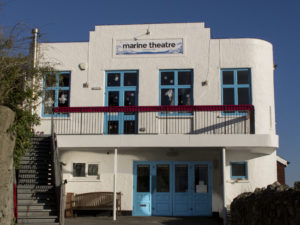 I’M convinced there is some kind of time machine at the Marine Theatre because it seems no sooner have I arrived at about 8am, than I am saying ‘good afternoon’ to everyone as midday suddenly rolls around.

Every week is a busy week but there are times when things move up a gear, especially when the deadline for the spring/summer brochure is approaching!

But then it’s not just about programming and brochures, with our historical and beautiful 124-year-old theatre comes an important inheritance that we not only love and value for its glorious past, but we need to think about the future. As with all elderly buildings, it needs the occasional improvement and this year we have taken the very important step of not only upgrading our toilet facilities but also installing a disabled cubicle.

This will come as a blessed relief to our loyal customers who have faced the trip down to the council offices in all weathers, accompanied by one of our devoted volunteers, when nature called. It has been a long time coming but then look how long it took to get the roof repaired. These things cost huge sums and need a lot of planning.

So as we move onto the next exciting chapter of the Marine story, with Gabby Rabbitts taking the reins, we were delighted and privileged to announce Ian Gillan’s agreement to be a patron of the theatre. Lead singer and lyricist for Deep Purple, Ian was bowled over by our little theatre by the sea when he visited earlier in the month.

Our first Royal Shakespeare Company Live event on February 14 was an enormous success; as our audience filed into the auditorium simultaneously with the Stratford audience, the quality of our new sound system combined with our cinema-sized screen made us feel like we were there with them.

Along with our special deal of 2-for-1 prosecco, it was the perfect end to Valentine’s Day.

Our March schedule is packed to the gunnels with a great mix of top-notch entertainment, including ‘Boadicea of Britannia Street’ and ‘Ain’t I A Woman’ to mark International Women’s Day.

Then there’s the Show of Hands frontman Steve Knightley who will be performing hits influenced by the likes of Bob Dylan and Radiohead.

Other live musical dates for your diary are Buster Shuffle and Rock For Heroes, when you will be treated to all your favourite hits including Dire Straits, David Bowie and Queen.

If it’s comedy you’re after then look no further than Lyme Regis Comedy Club hosted by Tom Glover, who brings three great acts to the Marine.

Staying with comedy, you mustn’t miss our home-grown humour with ‘The Vicar of Dibley’. This hilarious TV comedy will be larger than life thanks to the Marine Players, directed by Fred Humphreys, who has played many roles in a large number of performances including the memorable community play Monmouth.

The only problem you’ll have is choosing what to see and if you’re anything like me and forget to put things in your diary, the best way to keep up to date with what’s going on at the Marine is to join our mailing list. Because before you know where you are, another month will be gone and you’ll be kicking yourself for having missed some great entertainment!

A WEEKEND of free music, dancing and other events will bring the summer holidays to a close in Lyme Regis. […]

THE Lyme Regis branch of the Royal British Legion has updated timings for its ‘stay at home’ VE Day celebrations to tie in with national events.  […]