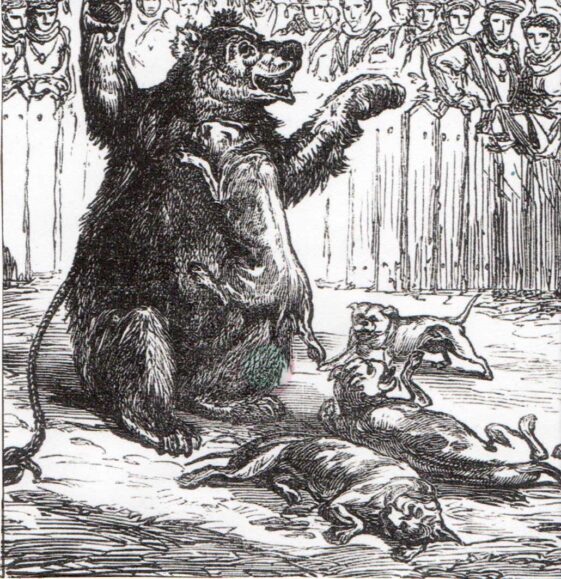 TODAY, the idea of a public spectacle involving pain and death being inflicted on animals would be considered barbaric. It was not so in the 16th century, blood sports were a popular form of entertainment, they were crowd pullers.

Lyme had a bull ring and it was there that bulls were baited by fierce dogs. The ring consisted of a circle of strong wooden posts which gave protection to the spectators while forming an enclosure for the baiting.

The bull was tethered in the centre of the ring, dogs were released into the arena and immediately set about biting and wounding the animal. During the ensuing fight, dogs were often badly injured or killed, the entertainment ended when the bull was exhausted and bleeding profusely from its wounds. It would then be led away for slaughter.

Bull-baiting was a legal requirement, no bull could be killed until it had been baited. Baiting raised the animal’s blood pressure, thus enhancing the taste of the meat.

The same venue was used for the bloody spectacle of bear baiting. There is firm evidence in the mayor’s accounts of it taking place in 1569 and almost certainly it was not an isolated event.

The bear was normally chained to a strong stake, it was then set upon by very large dogs/mastiffs. They often died after being clawed, bitten or crushed by the bear, to give the dogs more of a chance the bear’s teeth were sometimes broken off. The high value of the bear saved it from death with curtailment preventing its demise.

Bear-baiting was a national sport; the Queen was an aficionado and even had her own bear-pit. It is therefore not surprising that she refused to ban bear-baiting on the Sabbath Day. It was of course the only non-working day, so compulsory church attendance could be followed by a visit to the baiting ring or to cock-fighting.

Cock birds fitted with sharp spurs fought to the death and inns often had their own cock-pit. Gambling was a feature of this sport, a prize bird could be valued at some £50 and earn their owners considerable amounts.

Boys had their own version of cock-fighting; a cock-bird was tethered and then large weighted sticks were thrown at them until they were dead. This form of entertainment was known as cock-squailing and was linked to the crowing of the cock when St Peter denied Christ. Young children used a cloth effigy of a cock to practice on before progressing to live birds.

Elizabethan society was one where animals being killed was a common site, it was on view daily in the Shambles flesh market. It is not possible to pass judgement on Elizabethans enjoying blood sports, they were people of their time and such entertainment was the norm.

Today violence in films, on television and video games is often the norm.

ON October 21 1805 an historic sea battle took place off the dangerous Spanish coastline between Cadiz and Cape Trafalgar. […]