JUST when we wanted our councillors to be encouraging candidates to put their names forward for the town council election in May, it all got a bit unnecessary in the Guildhall again this week.

Lyme Regis goes to the polls on May 2 to elect 14 town councillors and one representative on the new Dorset unitary authority.

After a difficult few years where tempers have often been frayed in the council chamber, and potential councillors are starting to ask “do I really want to be part of this?”, it was agreed to hold a couple of sessions so prospective candidates could learn all about being a councillor.

Council staff went to the trouble of putting together a presentation on all facets of the job and booked the Lister Room for two sessions. It was very comprehensive. Unfortunately, only two people turned up to the afternoon session and one in the evening.

The Mayor, Councillor Michaela Ellis, attended the presentations, as to be expected, and Councillor Jeff Scowen also turned up – much to the chagrin of other members.

Councillor Scowen has been trying hard to convince all and sundry to put themselves forward for election to ensure that a contest actually takes place. That means there has to be a minimum of 15 candidates.

When it was revealed that Councillor Scowen had attended the presentations it kicked off yet again at a council meeting on Wednesday with at least two other members saying they had been told they were not allowed to be present.

Town clerk John Wright said the presentations were for potential councillors and not existing members and was clearly irked by the criticism, saying: “I wish I hadn’t bothered”.

He warned councillors to be “very careful” if they were questioning his honesty after veteran councillor Stan Williams claimed he had not been informed of the presentations. It was, by all accounts, a very awkward moment.

Councillor Williams clashed with the town clerk again later in the meeting when discussing assets on the Monmouth Beach, claiming Mr Wright had not replied to his letters.

Mr Wright turned to the mayor, saying: “This has got to stop.” The mayor warned Councillor Williams, telling him he could not continue to “accuse officers”.

On the question of poor attendance at the presentation to potential councillors, I’m not so sure that’s too much to worry about. Town councils have been told they have to promote the election and they fulfilled that obligation.

I am sure there are some out there who may well have decided to stand for election but did not think it necessary to be told how to do it.

A number of names who have considered standing for election have been bandied around town and I know of three who were planning to put their names forward and have now decided not to, mainly for reasons of time and commitment.

On Facebook, this newspaper has been accused, not for the first time by this individual, of putting people off because of our “negative and biased” reporting.

I would take a bit more notice of this person if he had ever been to a council meeting and was able to substantiate that allegation, but to my knowledge he never has… or not in recent years anyway.

Whilst I have commented on council’s decisions in this column in a critical manner, I have not personally criticised any of the current members. If new members act in a respectful manner to their colleagues, they have nothing to fear.

One person who is considering standing is Nigel Ball, a regular watcher of council affairs who has spoken many times in the public forum at council meetings.

Mr Ball is always ultra-polite to councillors but has, from time to time, pointed out where he believes the council has gone wrong. He attended this week’s council meeting and was less than happy when it was implied by Councillor Scowen that he was “a critic” of the council.

Mr Ball demanded an apology from Councillor Scowen, who did so immediately, saying he was being “light-hearted”. Mr Ball promptly left the meeting.

This is all pretty depressing stuff as the election gets nearer but I hope Mr Ball will put this to one side and offer himself up for election. I believe he would get the town’s support.

For those who may still be considering becoming a councillor, I’m sure the council would make their presentation available in hard copy format. Nomination forms are available from the council officers and have to be sent in by 12noon on April 3. Go for it! 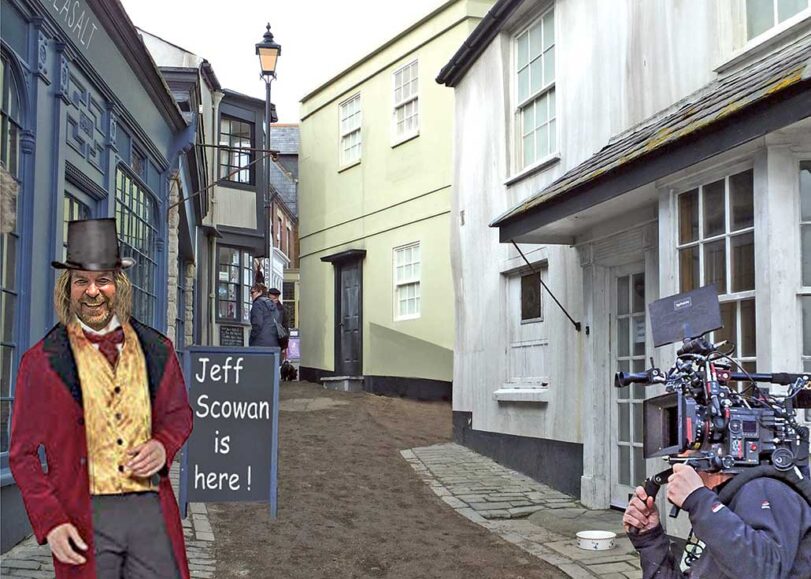 TOWN councillor and would-be mayor Jeff Scowen was, apparently, a bit miffed that his application to become an extra alongside Hollywood actress Kate Winslet in the film ‘Ammonite’, currently being shot in Lyme Regis, was rejected – especially as he fancies himself as a bit of a film-maker.

But undeterred, Jeff is planning to star in his own film – ‘The Jeff Scowen Story’ – or ‘How I took Lyme By Storm’. Filming has already started as you can see above (image by Rob Wheeler). Remember where you saw this first!

Time to promote all Lyme’s history

WITH the excitement of the filming of the Mary Anning story dominating the town this week, the focus inevitably falls on why Lyme has not honoured its most famous fossil hunter in some tangible form before now.

There is a very ambitious project on the go to erect a statue of Mary in an appropriate position akin to where her most famous fossil was found and if the ‘Ammonite’ film is as successful as ‘The French Lieutenant’s Woman’ even more earth sciences fanatics will descend upon Lyme to dig further into our cliffs.

Whilst I am all in favour of doing justice to Mary Anning not least for the rich pickings she has delivered to a town which did not treat her particularly well, we should remember that Lyme has a fascinating history and so I was interested to read a letter this week from our history correspondent Peter Lacey, who has suggested reviving plans to display a complete history timeline from 774 for the town.

I remember having similar conversations with Chris Boothroyd when he was running the volunteers at the Jubilee Pavilion, which I agree with Mr Lacey would be the ideal place for such an initiative, supposing of course that the now defunct information point will be re-opened at some time in the future by the new town council when it comes into being in May. A good early project to get their teeth into.

There are many other episodes in our history that would probably make a good film too!

IN my last column I mentioned how impressed I was with the presentation that Police and Crime Commissioner Martyn Underhill gave to Lyme Regis Town Council.

Mr Underhill offered an honest appraisal of why police numbers have been reduced in Dorset due to cuts in government funding and the amount of resources now needed to fight cyber and fraud crime.

He also told councillors that he thought Lyme would miss out on the failure to amalgamate the Dorset and Devon & Cornwall Constabularies.

What he didn’t reveal was the fact, released this week, that the cost of trying to bring the two police forces together was a staggering £400,000. How many extra bobbies on the beat would that pay for?

Take a look at our tapestries

IF you’re at a loss what to do on a Sunday morning over the next few weeks, pop into the Woodmead Halls and see the exhibition of tapestries created by ladies of the U3A. Some of Lyme’s most iconic views and buildings have been captured very skilfully and are well worth a visit.

The halls will be opened on Sunday mornings (10am to 12noon) for people to have a look. Others who have already seen them have enquired whether they could buy the tapestries but they are not for sale.

The tapestry group is just one of around 45 groups organised by the U3A which was founded in 2005 and which has a membership of about 600 people.

Free screening of a familiar tale

LONG before Kate Winslet and Saoirse Ronan came to town, Norman Wooland and Sarah Churchill were making Lyme Regis famous with their 1949 classic ‘All Over The Town’. […]

Residents’ parking permits to remain valid for another year

CONCESSIONARY parking permits for Lyme Regis residents will be rolled over for another year. […]