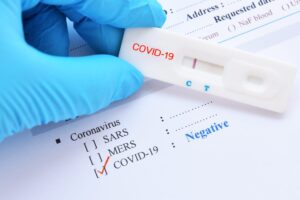 HEALTH Minister Matt Hancock positively bounced into the Downing Street briefing room yesterday afternoon with a very satisfied look on his face. We all knew why.

His demeanour was in stark contrast to a few weeks ago when he came to the lectern looking exhausted and close to tears as he announced that coronavirus deaths the previous day were a little short of 1,000. It was a grim day. A low point in the government’s fight to beat this contagion.

A few days later Hancock put his reputation and political career in jeopardy when he surprised even his most ardent supporters within the Cabinet, and his political enemies, of which there are many, when he announced that he had set a target of reaching 100,000 COVID-19 tests a day by the end of April.

No one gave him a chance of achieving this and since then he has been castigated for the slowness of extending the testing net – until the last few days.

As yesterday progressed, the news channels were reporting that the government was confident it would meet its target after enlisting pharmaceutical giants and universities for extra laboratory space, and expanding the eligibility for testing, making the testing process easier for patients.

But no one expected Hancock to announce, as humbly as he could muster, that the deadline had been met and the daily coronavirus tests had reached 122,347. They not only reached it – they smashed it.

Cabinet colleagues lined up to quickly to praise the Health Minister and his team for such a remarkable achievement, keen to support him as they knew how much pressure he had been under.

Even the former Tory Chancellor George Osbourne, now the editor (in name if not ability) of the Evening Standard, no supporter of this government, went on Twitter to offer his congratulations.

Predictably, the press immediately set about rubbishing the figures, accusing Hancock of massaging the figures by counting home tests as they are sent out rather than after they had been analysed. They claimed that these numbers should not be included as the tests might never reach their destination or be used or returned by the incidents.

First on the twittersphere  – surprise, surprise – was that self-appointed leader of the anti-Hancock brigade Piers Morgan, claiming that the target had been missed by a mile.

Later in the day it was pointed out that Morgan had claimed his ITV breakfast show had two million viewers. Apparently, according to Guido Fawkes, the right-wing political blogger, the true figure was nearer 800,000. Touche!

It’s pretty easy to challenge any set of figures and even if Hancock moved the goalposts the nearer it got to deadline day, does it really matter? To move the figure from 10,000 a day to somewhere near the 100,000 mark in itself is a massive achievement and the important thing is that the figure continues to be ramped up.

The media really does have to take a hard look at itself as it is imperative that this country pulls together as one as we pass through the peak of daily deaths, and with the Prime Minister agreeing to reveal his pans for easing the lockdown measures as soon as the government reaches its five criteria for doing so.

The morale of this country is being dragged down by the continual flow of bad news to a level where someone has to say “enough is enough”.

Predictably, critics of this blog are accusing me of being pro-Tory. I admit that I voted for the Conservatives at the last election but did not make up my mind until the very last minute. I cancelled my membership of the Conservative Party many years ago and have been a disillusioned Tory for some time.

I finally made my mind to vote for the Tories at the last election after interviewing Chris Loder. I thought he would be a typical Tory-boy but he’s far from that and is not a typical Conservative.

I have been really impressed with his performance in the few months since winning the West Dorset seat. He shows a real interest in local affairs and has already demonstrated his determination to work for Lyme Regis. He is being hugely supportive in helping LymeOnline access funding to continue publishing.

I’m generally skeptical of all politicians and the only one I had any real admiration for was the late Sir Paddy Ashdown, former leader of the Liberal Democrats.

And despite the allegations of my right-wing bias, I have said in this diary that I am impressed with Labour’s new leader, Sir Keir Starmer, who will lead an effective opposition after the barren years of Corbyn.

I’m not a particular admirer of Boris Johnson, which I’ve also said several times in this column, but I am a supporter of this government in the efforts to deal with the biggest challenge faced by politicians since the last war.

The political in-fighting needs to stop, the media needs to be more supportive and we must all pull together to get through this.

There will be plenty of opportunity for politics when this is all over.

Reading this diary is not compulsory. We don’t charge for content on this website and I think we are doing a pretty good job keeping the good folk of Lyme and district informed on how our community is coping with coronavirus.

And there are are plenty of left-leaning blogs on the web to satisfy those who are offended by my comments.

Let me leave you with this thought from Mark Twain: “Patriotism is supporting your country all the time, and your government when it deserves it.”

Have a good weekend.

Authorities call for visitors to stay home this weekend

LOCAL councils are calling for visitors and day-trippers to stay away from the area this weekend.  […]

Why I’m starting to feel sorry for the overworked ministers

I AM determined to support the government in their fight against coronavirus – not for any political reasons but because they are the only government we’ve got and they have got to get us through this. […]