IF you are feeling a little depressed today about the continuing fight against coronavirus, I advise you not to pick up a national newspaper.

All of them are full of doom and gloom headlines as a catalogue of dismal statistics came together yesterday to underline that we are facing great hardships ahead.

Deaths topped the 12,000 mark but it is believed these are grossly under-reported as the figures do not include those who have passed away in private homes, care homes and hospices where another 4,000 are feared dead.

Further doubts are cast over whether the government will be able to meet its target of carrying out 100,000 tests every day by the end of April, and there are still reports that that there is a lack of personal protective equipment, especially for those in the care sector.

To stem the rate of death in care homes, the government has had to agree that all residents and workers will now be tested for COVID-19.

To crown a pretty dismal day for the government, the Office of Budget Responsibility predicted a 35 per cent fall in GDP and two million thrown out of work. Ouch!

With other European countries easing their lockdown restrictions in a bid to kick-start their economies, the question on everyone’s lips in the UK is: “When will this all end?”

De-facto Prime Minister Dominic Raab has made it very clear that with the current rate of hospital deaths – another 778 yesterday – it’s too soon to consider relaxing the current restrictions, but the Cabinet is coming under great pressure to publish their strategy for how we will get back to normality when the statistics start to decline.

Is it really a united front?

If you believe some of the most well informed political commentators, it would seem that a chink is starting to appear in the Cabinet’s determination to present a united front on the crucial decisions.

It has been reported that Boris Johnson, a life-long libertarian, was in favour of restricting the lockdown to the shortest time possible, but his experience of being treated intensive care for the virus, which in his own words were “touch and go”, has, by all accounts, tempered his view  somewhat.

Two camps have emerged in the Cabinet – those who want to return to normality to avoid permanent damage to the economy, favoured by the Chancellor Rushi Sunak; and those who insist that social distancing must remain in force long after the infection curve flattens.

The latter view is favoured by Raab and Health Secretary Matt Hancock, the first two ministers Boris contacted after he was discharged from hospital, an indication perhaps that he is leaning towards their view.

One thing they are at one on, however, is the view that schools have to be re-opened this term.

It is expected that the government will confirm tomorrow (Thursday) that there will be a three-week extension to the lockdown, ever mindful, no doubt, that they are now looking at spending an extra £88 billion next year, although Hancock is believed to be pushing for the lockdown to last until at least June.

However, there is one story in all the papers which should boost our spirits. War hero Captain Tom Moore is celebrating his 100th birthday in April by walking around his garden, aided by a frame after receiving a new hip, 100 times in a bid to raise £1,000 for the NHS proudly wearing his medals as he goes.

Television picked up on the story and the Great British public has warmed to his efforts and today donations have exceeded the unbelievable total of £5 million pounds, a response which has overwhelmed Tom and his family.

Whilst the death rate shocks us on a daily basis, I always give thanks that we are living in such a beautiful placed, reinforced every morning as I stroll along the seafront for exercise. Today, as glorious as ever the incoming tide was washing in some kind of foam onto the beach which I don’t recall seeing before.

The South West is very much at the bottom of the graphs shown every day at the Downing Street briefing, with less cases and the lowest number of deaths of any region in the country. We should be thankful for that, but as I have written before, it’s not an excuse to relax our adherence to the lockdown restrictions. 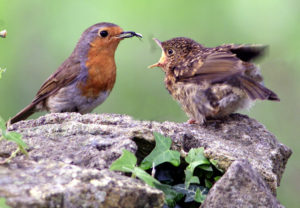 One positive for me in this lockdown is that I have re-engaged with nature. Having fairly recently succumbed to wearing a hearing aid in both ears, after suffering badly from tinnitus for 25 years, I have suddenly discovered that my garden is a hive of activity for birds.

Shortly after starting to wear my hearing aids, I popped out into my garden one day last summer and was overawed by the dawn chorus which I had not experienced for years. Since then I have become interested for the first time in my life in our bird population and I am slowly learning how to recognise the various species.

Mrs Evans, of course, knows them all and is encouraging me to feed them regularly. We have a nest of robins in one of our trees, very territorial, and regular visits from sparrows, blue tits, chaffinches, the occasional magpie, doves and a couple of hungry pigeons.

I’m putting out mixed feed for them and was fascinated this morning to see a robin standing guard over a bowl of seeds and not allowing any of the others to join in the feed until one of the pigeons arrived. I’ve also noticed that they like the black sunflower seeds best, picking them out before they eat the rest.

It’s surprising what new interests you find when you are bored.

And so to end this Day 29 Isolation Diary entry, an apt quote from the greatest naturalist of all time, Sir David Attenborough, no stranger to Lyme:

“Everyone likes birds. What wild creature is more accessible to our eyes and ears, as close to us and everyone in the world, as universal as a bird?”

THE chalet, caravan and day hut site at Monmouth Beach in Lyme Regis has been closed until further notice. […]