NEW relationships were forged with the West Dorset MP when he met with us recently to discuss local, regional and national issues.

Chris Loder was invited to meet with the council after taking office in December to get to know councillors and officers, to hear about life from the council’s perspective, and to share his views on topical issues.

We discussed local matters including the tourist information centre, the closure of the preschool and second homes, regional issues such as the proposed Dorset National Park, and national issues like the need for more investment in the South West.

Mr Loder, who lives in Sherborne, also revealed his love for Lyme Regis and said he is in the town around once every 10 days.

“I have spent more time in Lyme Regis outside of my own town than I have any other town in the constituency so far,” he said.

“I have to say, it is lovely and I have fallen in love with the place.”

As a newly-elected MP, he asked for the council’s patience while he settled into life at Westminster.

He said: “I’m not an experienced politician. I was a district councillor for two years, I spent my 20-year career with the railways. What I ask of you, because I’m new and I’m undoubtedly going to make a wrong step or two in the next year, is for your understanding but also your feedback.”

We told Mr Loder about the major projects we are planning and he was particularly interested to hear the council had declared a climate and environmental emergency.

He said: “In the election campaign I made some commitments about the environment, and I don’t mean manifesto headlines, I mean specifics.

“I committed that we would establish a West Dorset Environment Forum, which gives the opportunity for others to share their input, experience and views, and it also gives me the opportunity to hear those suggestions and initiatives which we can then package together with a view for me to go back to a government organisation and say ‘we are on the front foot in West Dorset, this is what we would like’.”

Mr Loder said in his election campaign he made a commitment about the preschool and he had since been working closely with the local group trying to re-establish this facility.

He said he would be writing to the chairman of the governors and headteacher at St Michael’s Primary School with a ‘view to hopefully find a way forward’ but added: “I can’t guarantee anything at the moment.”

We discussed the lack of development land in Lyme Regis and the need for improved connectivity, which led Mr Loder to share his concerns about second homes.

He said: “When I walked around the streets of Lyme Regis twice during the election campaign, I was surprised by how many houses it appeared to me to be not actively lived in. “I’m finding the same in Sydling St Nicholas, Beaminster and Sherborne – it’s come to the point where this is the trend.

“It’s one of the reasons that as a point of principle I don’t support the concept of mass housing developments, one of the reasons being is it feels to me they are not in the community’s interest. The Community Land Trust initiative at Garmans Field is a good example and we need many more of those.”

Mr Loder asked about the Tourist Information Centre and whether there was the possibility of the town council working with Dorset Council to provide that service.

We explained how we would like to work with Dorset Council to discuss the way services and assets are managed in Lyme Regis, but not to the detriment of local taxpayers.

Mr Loder said he had met with Dorset Council earlier that day and felt there needed to be more energy and focus on the west of the county.

“We talked about some of their financial pressures and the issues and challenges they’re facing,” he said.

“It’s fair to say it’s not going to get any better in the immediate term.

“However, a lot of the commitments that have been made in the election we haven’t seen yet how they are going to pan out.”

On a more regional scale, Mr Loder said he felt there needed to be greater investment in the South West and he was looking to redress this.

He said: “I have a meeting with all the other MPs in the south western region. The reason I have asked for that is because we now have a situation where the impression is all the excitement, all the investment and all the money is going into the northern belt.”

But one thing he believes will be a “disaster” for the area is the proposed Dorset National Park, which he said he was ‘absolutely opposed to’.

“I feel like we are sleep-walking into it,” he said.

“Whilst I’m not suggesting the climate emergency is any less important, the thing that is absolutely immediate in terms of community impact is that the Dorset National Park will be a disaster for west Dorset, it will make it a museum piece.

“It is quite shocking we have just gone through some sort of streamlining exercise of our (Dorset) councils, now to have a proposal that’s going to create a quasi-judicial organisation that has planning laws.”

Mr Loder was encouraged to hear the town council would be holding a public meeting about the proposed national park, with speakers both for and against the idea.

He said he would ‘welcome a balanced debate and discussion’ as there didn’t seem to be anyone championing the case against it.

“As it stands today, I think the Dorset National park will happen unless we do something about it,” he said. 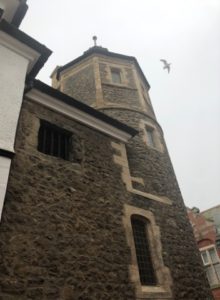 THE Guildhall tower has been restored to its former glory.

The tower of the Grade II-listed building was looking a bit tired, so we took advantage of the recent road closure to carry out some improvements.

Our team fixed the iron guttering and lead flashing, and perhaps most noticeably, removed the flaking paint from the stone reveals of the stain glass windows. We also had the overhanging Guildhall window repaired, after being hit at least four times by large vehicles in the past year.

We’re really pleased with how it looks and feel the tower of one of the town’s most prominent and historic buildings has been given a new lease of life.

Getting ready for colder weather

A NEW community grit bin has been installed in Roman Road. The town council has 20 grit bins around the town, filled by Dorset Council, to help keep the town moving during ice and snow.

The major routes are gritted by Dorset Council and the town council will grit key areas such as outside schools and medical centres, but residents are also encouraged to help themselves to the grit to make pavements and pathways safe.

As a new bin has been installed in Roman Road, the bin that used to be located between Haye Close and St Georges Hill has now been moved to the corner of Haye Lane.

The council’s emergency planning procedure includes the locations of all the community grit bins, as well as useful contacts and organisations that can assist in an emergency.

The procedure can be found on the council’s website at www.lymeregistowncouncil.gov.uk/policies 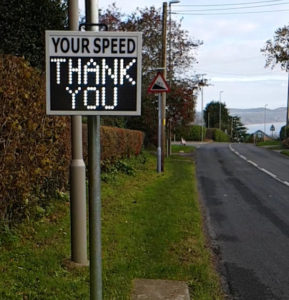 HAVE you seen our new speed indicator device (SID) on your way into the town?

The solar-powered SID will be moved around regularly, telling drivers their speed if they are travelling at over 30mph, or displaying a ‘thank you’ if they’re on or under the speed limit.

The locations have been agreed with Dorset Council’s road safety team, which carried out a survey of traffic speeds and chose sites which would best protect the residents of the town.

DID you know there is a community transport service available in Lyme Regis providing services to help improve quality of life? […]

THE Deputy Mayor of Lyme Regis, Councillor Jeff Scowen, has shocked his colleagues and residents by announcing that he will resign at the end of the year. […]

Just what don’t they understand about staying indoors?

THERE are a number of Lyme Regis residents who are working flat out in the NHS at our two local hospitals, Bridport General and Dorset County, who are on the front line caring for coronavirus patients. […]

LymeOnline ·
@LymeOnlineUK
The event will be a chance for existing members to catch up and potential new members to learn more about the society #lymeonline #lymeregis #uplyme #devon https://t.co/Rs9jMYGldS
View on Twitter
0
0