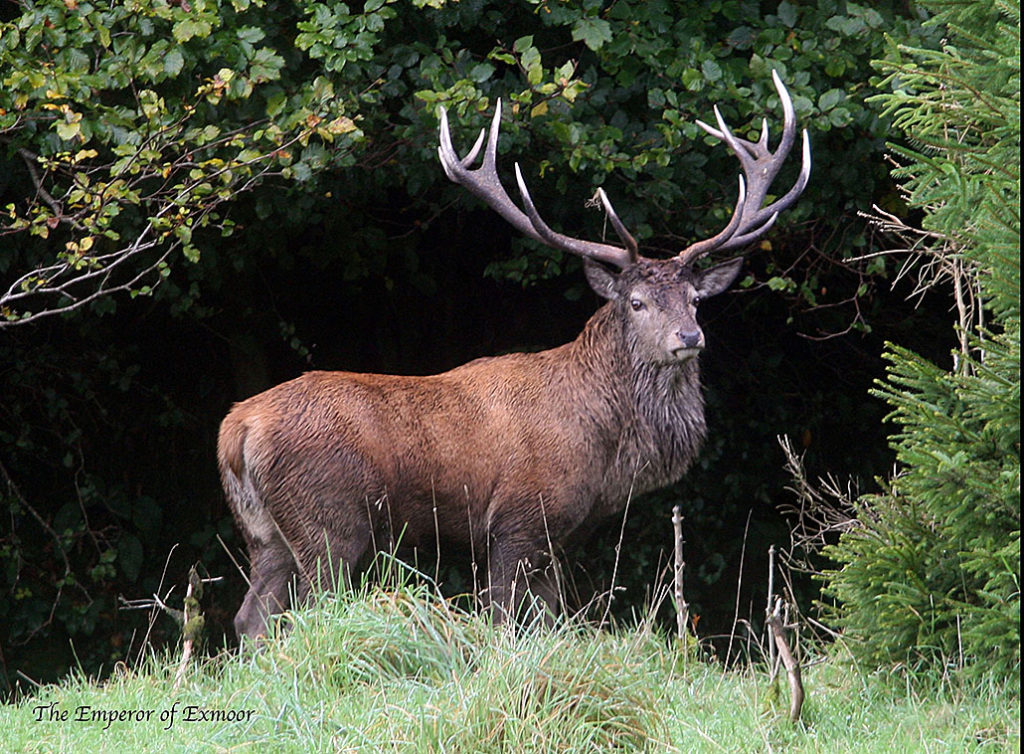 EXMOOR and its way of life, the people, the wildlife and the shear beauty of the place can take your breath away.

But there came a time when I had to tell a little white lie when I discovered a huge red stag on private property in Rackenford, a small village near Exmoor. So to protect the stag’s whereabouts I said he lived on Exmoor.

I had known of the amazing spectacle of wild red deer grazing the private meadow for a number of years. In fact, I photographed another massive stag called Bruno for a national Sunday newspaper in the same spot a few years before.

This time, and with the new owners’ permissio,n I noticed a huge stag in amongst the hinds (females). He was massive, with a great set of antlers which showed off the sheer bulk of the animal and his ragged main and muscular body. He was a perfect specimen. He was so big that during the rutting season none of the other stags would challenge him as he kept all his ladies close to him.

I had already decided that he would be called the Emperor of Exmoor, a great media name. So I flagged him up to the national newspapers as possibly Britain’s largest wild animal, working on the fact that red deer stags are our largest wild animal. The Daily Mail picked up on the Emperor story and sent their top feature writer down to get close to the beast, which she did and wrote a very interesting article still keeping the secret as to where he was living.

So after another Daily Mail spread on the Emperor it came as a bit of a shock when Exmoor countryman Johnny Kingdom rang me at home and told me the Emperor had been shot and killed. Johnny agreed to talk to close friend and journalist Martin Hesp but only if we promised to keep his name out of it, which we both agreed to do.

In all the years I have been in the newspaper business I have never seen a story gather so much pace in such a short time. Martin’s story broke in the Western Morning News on the lines of ‘Who shot the Emperor, Britain’s largest wild animal?’ and the story went global. It seems that everyone loves a ‘whodunnit’.

I was interviewed by dozens of radio and TV stations all over the world; they all wanted to know about the Emperor. It began when the telephone started to ring a 3am in the morning from an Australian radio station. I spent the next day being interviewed for all media outlets including ’Countryfile’ with John Craven. It was even the lead story on the BBC 6 o’clock news and it resulted in questions being asked in the House of Commons regarding the legality of shooting wild deer.

It transpired that the stag had wandered into a field where there was a leagal shoot taking place and he was shot probably for his antlers, not because he was the Emperor.

A disappointing discovery on the River Lim

A FEW years ago I’d been looking for a reported kingfisher that had been seen fluttering up and down the leat and river at the bottom of Sherborne Lane in Lyme Regis. […]

Battling it out for the best birds!

THIS time of year our birds and animals are battling each other for the best partner and the best place to build nests for babies. […]

Birds of prey will not be used to scare off seagulls

LYME Regis Town Council will not be employing the service of eagles to frighten away seagulls – but it took the casting vote of new mayor Brian Larcombe to reject the idea. […]