THIS week – especially those of us in the “extremely vulnerable” category – will hear what the “new normal” will be like as Boris prepares to unveil his roadmap of how we will freed from coronavirus lockdown.

It has been made perfectly clear that those over 70 with underlying health issues might well need to continue isolation for several more months, or possibly until a vaccine is available, as others are allowed to leave their homes and be able to meet up their relatives.

Some are saying this will have a severe impact on our mental health and would be discriminatory and unacceptable.

Baroness Ross Altmann (me neither), a mere 64-year-old, claims that many over 70s would prefer to go to prison than stay confined to home for a few more months. I wouldn’t.

If it means that I will be able to see my two granddaughters again in person, then I will do exactly as I’m told. The alternative is too frightening to contemplate.

Our generation is fortunate that, thanks to the wonders of technology, we can see our grandkids whenever we like. I admit talking to them on a computer screen is not quite the same and does not compensate for not being able to give them a big hug.

My two granddaughters, Ella and Freya, live in London and we have not seen them since Christmas. We do speak to them every Sunday via FaceTime, however. The eldest one, Ella, aged five and almost a half, wrote to us to thank us for their Easter presents (Jackie, my wife, had made them two summer dresses each and I put together a photo album for them).

I was really surprised how good Ella’s joined-up writing was for a five year-old so I decided to send her a personal letter back, saying well done and telling her a bit about what LaLa (that’s Jackie) and me were doing whilst in lockdown. Ella describes the virus as “a bug going round”.

Letter writing as been one of the casualties of this digital age but I have decided to write a letter to both grandkids regularly during these difficult days. I hope they might keep them and read them when they are older as a reminder of why they couldn’t go to school and see their friends.

My son tells me that Ella has written a letter back to me which I’m excitedly expecting to arrive by post later today. I’ve never been excited by the arrival of an email.

Whilst on the subject of this computer age, there was a brilliant story on breakfast TV this morning about a nurse that had been working on the COVID-19 ward since the virus started. She soon noticed how distressing it was for patients who were unable to receive visits from their family so she decided to raise money to buy tablets (hand held computers to you luddites) so that they could see and talk to their loved ones.

As you might expect, the idea has taken off big time and donations have been rushing in to support this brilliant initiative, and the nurse is now providing hundreds of tablets for other hospitals.

Having fairly recently undergone hospital treatment, this really touched my heart strings. I can think of no worse scenario than being seriously ill, frightened that you might not make it, and not being able to receive the comfort of those closest to you. Not being able to say goodbye is an even more distressing thought.

I could not help noticing in the Sunday Times that a YouGov survey revealed that a good majority trust Boris to do a better job than Labour leader Sir Keith Starmer and that the government are handling the virus well (61% compared to 33% who think they’re handling it badly).

I’m happy that my perceived right-wing views in this diary, which some of you find so annoying, are in kilter with the majority of the rest of the country.

But in the interest of balance, the survey also revealed that only 22% thought the government had prepared well for the pandemic and 62% thought lockdown came too late.

There will be plenty of time when this is over to assess how well or otherwise our politicians have done and I also hope there’s some examination of the media’s role. 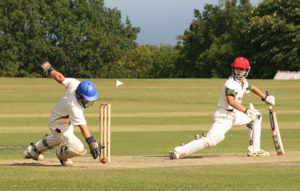 Saturday should have seen the start of the cricket season but, alas, coronavirus put paid to that.

Because of my long association with Lyme Regis FC, going back nearly 60 years, people think that football is my first sporting love. Not so. Cricket was my greatest passion and I look back on my cricketing days as the happiest in my life.

Although I played a few games for the Uplyme and Lyme Regis Cricket Cub first X1, I was strictly a 2nd X1 player, wicketkeeper and occasional opening bat of modest ability.

I also spent a few years as club chairman during the period when the players built the new pavilion on the King George V playing field. They were heady and hugely enjoyable times and I forged friendships that have lasted the test of time.

All sporting clubs go through difficult times and Uplyme & Lyme Regis have experienced a rocky road for a few years, culminating in the club nearly going out of business due to a lack of funds.

However, past and present players and the community rallied round to get the club on a firm financial footing and last season proved to be one of their most successful for some time.

It is a pity that the current season is under jeopardy because of COVID-19, especially as new chairman Steve Batey, a brilliant cricketer, has re-energised the membership, carrying out a refurbishment of the pavilion, and they were looking forward to a successful season.

There is every possibility that the season will be wiped out completely but cricket will return to the King George V at some time and the local club, under Steve’s enthusiastic leadership, will go from strength to strength. Of that I have no doubt.

I have written in this diary before about the challenge filling the digital pages on LymeOnline without any events to cover or sport taking place.

My lifetime pal Stuart Broom got us out of a hole by writing a four-part series on his love for football and Lyme Regis FC in particular with the final part being published in our next edition on May 15.  You can read the first three parts in our Sports section.

After that I am intending to write a series on my cricketing memories which will include reference to how Steve Batey prevented me from scoring my maiden century in the very last game I played.

I subscribe to the view of the author Marcuss Berkmann, who wrote in one of my favourite cricket books, ‘Rain Men: The Madness of Cricket’: “For once cricket has claimed you, it never lets you go”.

EAST Devon District Council has made £46,000 of funding available to projects providing food to residents who are in food poverty during the coronavirus pandemic. […]

IT was smiles all round this week for the 1st Lym Valley Scouts, as they prepared to return for a socially-distanced term. […]

Fears over coronavirus start to take effect on local life

FEARS over the spread of coronavirus have started to take an effect on day-to-day life in the Lyme Regis area.  […]