BACK in 1811 when a 12-year-old Mary Anning dug up that ichthyosaur skeleton, I wonder if she could have comprehended the impact she would have on the world of science, and the thousands she would inspire, not just here in her hometown of Lyme Regis, but right across the globe.

Exactly 223 years after her birth, hundreds converged in Lyme Regis to watch a statue in her honour be unveiled. About time too! May 21 2022 is now another date that will stick in the history books – the day that Mary Anning finally came home.

In the end I’d say it was several hundred and no sign of Sir David, but plenty of other experts on hand for an afternoon of enlightening speeches before the big reveal.

It was definitely a much harder event to cover on my own than I had anticipated, battling with the large crowds, a snap of regional and news agency photographers (that is the collective noun, I Googled it), and a few hours stood up in the beaming sun.

Suddenly it all seemed worth it when artist Denise Dutton’s bronze depiction of Mary was finally unveiled to huge cheers. I couldn’t help but feel a little proud – a seemingly ordinary working class woman of Lyme Regis, but not really that ordinary at all, rather remarkable actually, and finally recognised as being so some 200 years later.

I went back down to Gun Cliff Walk a couple of days later to get a closer look and take some more photos, but didn’t expect there to still be so many people queuing up for their time with Mary. She’s definitely a hit!

When it eventually was my turn, I was blown away by the tiny, intricate details – perhaps we should run a competition for how many ammonites appear on the statue?

The day after the unveiling it was back to something a little more traditional in Lyme Regis – the Blessing of the Boats ceremony – an event I am far more practiced in covering.

As always it was a touching and well-organised ceremony to remember all those lost at sea, with the highlight being a clever poem written and confidently delivered without notes by two young girls, Jovi Pritchard and Freya Williamson.

Blessing of the Boats was Cllr Brian Larcombe’s first official event as Mayor of Lyme Regis three years ago, and also his last on Sunday. He took the opportunity to make a heartfelt speech thanking all those in the town who had supported him and wife Wendy during their term in office.

And on Wednesday it was time for new mayor, Cllr Michaela Ellis, to officially take over at the historic mayor-making ceremony.

Held in the Guildhall, this event is steeped in tradition, with lots of being told to stand up, sit down, stand back up, de-robing and robing of mayors, handing over of chains, very old looking keys… and eventually you get a glass of wine to make the toasts!

I must have attended about 10 mayor makings during my career and made speeches on two or three occasions, but I love to pick out and watch the faces of those who have never been before – they often look unsure if they should be up, down, in or out!

I had bumped into Rob James – creator of Love Lyme Regis and chairman of the Christmas Lights Committee (just one of his many hats) – a few days earlier and he seemed nervous about attending for the first time to make the toast to the town of Lyme Regis.

I must say he had nothing to worry about; his speech received the best reaction of the night as he poked fun at himself and his committee for the accidental ‘gold pants’ theme of last year’s festive illuminations. I’m pretty sure it was the first and last time I’ll ever hear the words “sparkly bras or “twinkling thongs” in the Guildhall!

On a more serious note, many of the speeches shared hopes for a brighter future after the pandemic and current war in Ukraine and cost of living crisis.

They called for a united town council to help us through these challenges. Let’s hope those words did not fall on deaf ears.

In the immediate future, we can all look forward to celebrations as we mark the Queen’s Platinum Jubilee this weekend, which in Lyme Regis also ties in with Jazz Jurassica.

My diary for the four-day Bank Holiday is packed with no less than 24 events to get around in Lyme Regis, Uplyme, Charmouth, Axminster, Seaton and Colyton. I’m not yet sure I’ll be able to make it to every one, but I’ll do my absolute best to bring you with the most comprehensive jubilee coverage in the area.

One thing is for sure – by the end of the weekend, I think I will have had enough tea and cake to last a lifetime! 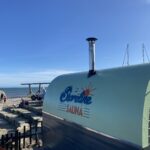 WHAT’S that new wooden caravan that has appeared next to the Cobb? It’s the Shoreline Sauna! Making the most of the growing popularity for cold water swimming and trendy saunas, the Shoreline Sauna has arrived in Lyme Regis for summer, offering communal or private sauna sessions with views that are pretty hard to beat. Once you’ve relaxed in temperatures of 60-80 degrees, it’s time for a revitalising dip in the sea! See page 8. 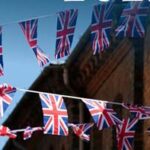 WHERE do we start? The bunting is up and, as mentioned above I have 24 dates in my diary this weekend as we mark Her Majesty’s 70 years on the throne, but if you’re going to pick just one event to attend it has to be the BBC Big Band Orchestra playing on Lyme Regis beach on Sunday, June 5 followed by a spectacular firework display. 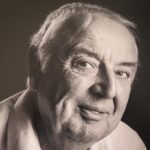 MY Lyme Regis Football Club family have been left heartbroken by the sudden passing of stalwart and life-member Ken ‘Cooey’ Hitchcock, so if you read one thing this week, let it be the touching tribute written by Philip Evans. Ken was a family man, Lyme Regis through and through, a life-long Seasider who is completely irreplaceable at our club. We raised a toast to him at our annual presentation night on Friday and today will be saying goodbye at his funeral.

THE emergency services were scrambled following reports of people cut off by the tide at the notorious Black Ven landslip, east of Lyme Regis, on Monday afternoon.  […]

I WAS pleased that Lyme Regis Town Council has decided to make their longest serving member, Cllr Stan Williams, an Honourary Freeman of the Town. […]