Pondering the meaning of time in post-lockdown Lyme Regis 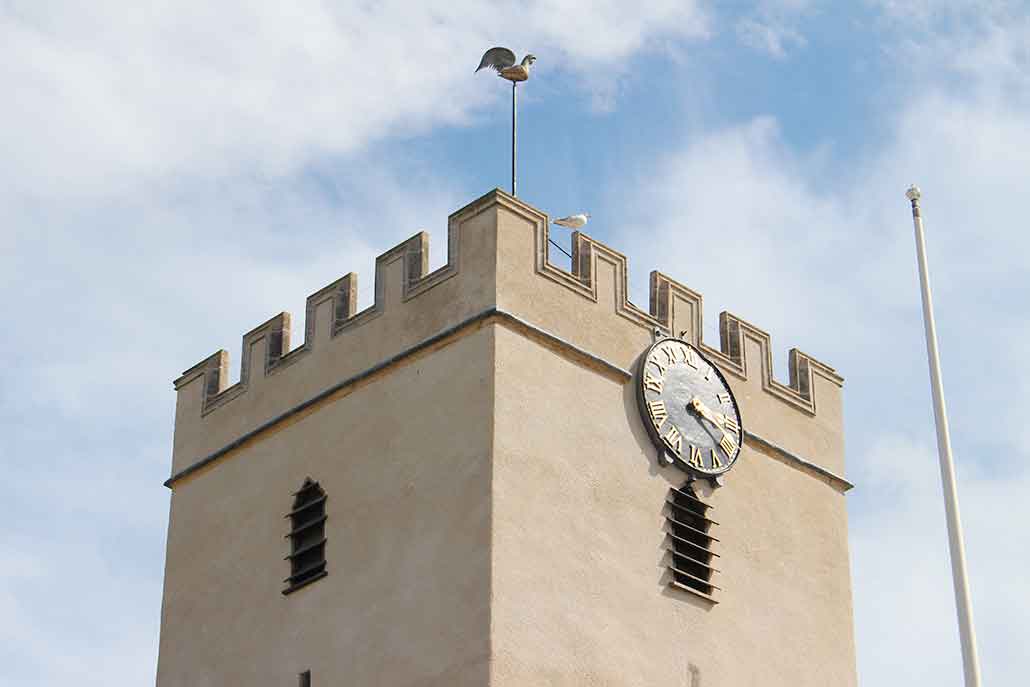 2020 has been a strange year. During lockdown, I am sure that, like me, many of you found yourselves wondering what day it was and losing track of time as the days lost their usual routine and structure.

The wristwatch, the ticking clock, the mobile phone, email and the electronic calendar usually remind us of the relentless march of time as we go about our hurried modern life.

When it comes to sheer numbers though, The Clock Inn at Chideock takes some beating with a collection of about 150 clocks!

In past history, we would not have been encumbered by these personal gadgets and life would have ticked by on ‘Dorset time’.

For accurate measurement, we would have had to rely on public clocks. These came into their own in the middle of the 19th century with the arrival of the rail network and the need for a single time standard across the country. 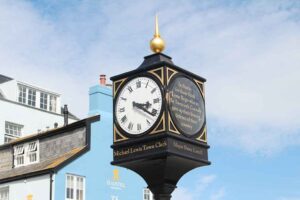 Around Lyme Regis, we still have some prominent public time pieces. Standing tallest over the town is the clock on the tower of St Michael’s Parish Church. Then, we have the distinctive four-sided Millennium Clock in Cobb Gate car park, commemorating all of the major conflicts of the 20th century.

The memorial clock above the Marine Parade shelters was erected by public subscription in memory of those who lost their lives in the 1939-1945 war. Finally, we have the clock above the harbour master’s office, visible to boats and walkers around the Cobb.

“Time and tide wait for no man,” and this race against time is something that we take for granted in our busy lives and only occasionally do we pause to question what it all means.

St Augustine neatly captured the essence of the problem when he said “What then is time? If no one asks me, then I know what it is. If I wish to explain to him who asks, I do not know”.

Our basic unit of time – the second – is officially defined as 9,192,631,770 oscillations between two atomic states of caesium-133, as used in atomic clocks. But what are we actually counting – seconds from what? 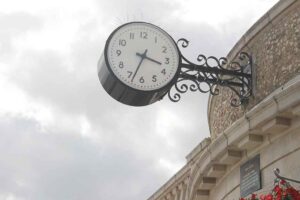 The easiest answer is perhaps that the clock started at the creation of the universe – the Big Bang – and has been ticking ever since, which then begs the question of where are we heading?

For most of us, the flow of time is all too obvious as we get older and it was George Burns who said “Ageing gracefully is the nice way of saying you’re looking worse”.

Contrary to time travel in science fiction, the British Astronomer Arthur Eddington came up with the concept of the arrow of time. By studying the organisation of atoms and molecules in objects, the idea of increasing disorder was introduced.

This explains why life is a one way street and why, although we may observe a wine glass shattering on the floor, we never see the time reversed process with the glass reassembling itself from the shattered shards.

Eddington was building on the work of the Austrian physicist Ludwig Boltzmann who developed a whole new scientific field called statistical mechanics – how the properties of large collections of atoms determine the physical properties of matter. 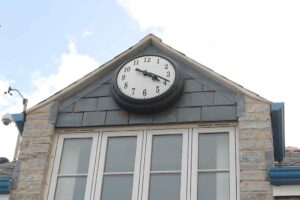 The measure of disorder was called “entropy”. Think of the average teenage bedroom or student flat which might start off nice and orderly, but soon degenerates with clothes, books, washing, crockery, etc. randomly accumulating in a mess. That is entropy in action!

It is a basic law of the universe that the entropy of a system – like a bedroom – always increases over time. The best that can be done is that the entropy can be lowered in certain places by expending energy.

The wine glass has its atoms ordered neatly and there are only a few ways of doing this (low entropy). Once the glass is smashed though, the atoms are in a complete jumble (extremely high entropy) and it would take huge amounts of effort to reverse this.

Boltzmann was a man ahead of his time with many of his contemporaries rejecting his ideas because they did not believe in atoms. His tombstone bears the inscription of his entropy formula and it is ironic that three years after his suicide in 1906, following a fit of depression, the French chemist Jean Perrin proved that atoms exist and the thermodynamic arrow of time became accepted.

It was one of Einstein’s teachers in Zurich – Hermann Minkowski – who came to the conclusion that time is actually intertwined with space and today we talk of “spacetime” as a single entity, rather than as two separate dimensions.

In 1916, Einstein went on to explain how gravity arises from the curvature of spacetime in his theory of general relativity. This started the quest to find the fundamental constituents and forces shaping the universe and how these may be linked to its final fate.

This cosmological arrow of time and our ultimate destiny is still the subject of intense debate. It could be that gravity will win and we will have the ‘Big Crunch’ – a kind of reverse of the Big Bang – and presumably the end of time?

Or, we could have the ‘Big Freeze’ where the universe continues to expand, eventually growing so vast that supplies of gas become too thin for new stars to form and only a soup of radiation is left. Eventually, this cools down to the point where time loses any meaning because nothing happens any more. This is the so-called ‘heat death’ of the universe.

Recent measurements though indicate that the universe is expanding at an increasing rate and predict that everything from galaxies, planets, atomic particles to even spacetime itself, may eventually be torn apart. This will culminate in the ‘Big Rip’ around 22 billion years from now. A dramatic end as the universe vanishes – again the end of time.

So, if the passage of time seems to be a mystery in our small Dorset seaside town, spare a thought for how the universe must feel!

The dark skies of Dorset and Devon

ONE of the benefits of living in Lyme Regis and much of Dorset is that we are in a part of the country where we can often appreciate the dark skies away from the bright lights of big towns and cities. […]

Lyme and lather: our town’s historic link to handwashing

IT seems much longer ago, but it was only in February that Boris Johnson first exhorted us all to wash our hands for at least 20 seconds to protect ourselves from transmitting the COVID-19 virus. […]

The cosmic elements of Lyme Regis

WHAT comes into your mind when you think of Lyme Regis and the surrounding coast? Images with sand and pebbles probably feature quite prominently. […]