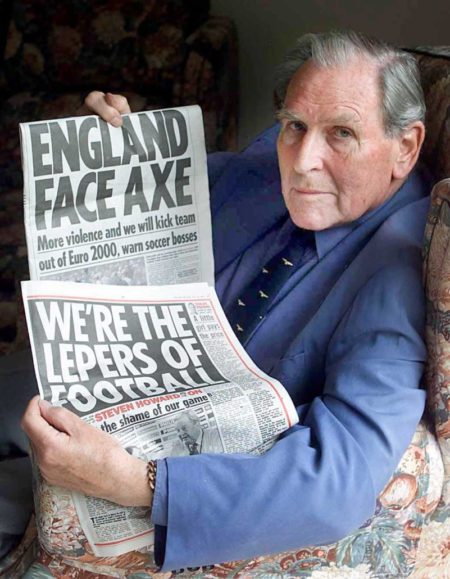 IT was a real privilege to have met and photographed football commentator Kenneth Wolstenholme.

“Some people are on the pitch, they think it’s all over. It is now!” Five seconds of historic commentary entrenched in the very identity of most English football fans.

I was 12 when England won the 1966 world cup and even at that age Wolstenholme’s tone and style of commentary was truly cemented in my head, so, what a privilege all those years later when I was commissioned to photograph him at his small but spotless bungalow in Torquay.

The story was not particularly a positive one; England’s fans were shaming the nation at the European Championships in 2000 and Kenneth was asked for his comments regarding the newspapers headlines. I can tell you he wasn’t very impressed.

He made us a cup of tea and it was interesting to chat to him. I asked him why he had no memorabilia on his walls, especially from the 1966 final, but he said that it wasn’t something he was bothered about.

He was still commentating in London but not full time. I asked him why he had chosen to live in Devon, to which he replied it was to be closer to his family.

During the 1950s and 60s, Kenneth Wolstenholme was the voice of football on the BBC and gained national fame for the phrase uttered at the very end of his match commentary on the 1966 World Cup Final, when Geoff Hurst scored the goal in the dying seconds of the game to secure England’s 4-2 victory over West Germany.

But before his television career, at the start of the war, Wolstenholme was a member of the Royal Air Force Reserve, and was soon called-up at the outbreak of WWII.

By 1941, he had qualified as a bomber pilot and was in the thick of the action. Wolstenholme completed more than 100 highly hazardous sorties over occupied Europe and in May 1944 was awarded the DFC.

The following year, he won a Bar to his DFC for his continual bravery in raids on Germany in a period of exceptionally heavy night fighter activity.

He finished the war as an acting squadron leader having spent its last stages working in the RAF’s public relations department.

‘Day to forget’ for the Swallows

UPLYME manager Stu Wooster described Uplyme’s 9-1 defeat at Waytown Hounds on Saturday as “a match and day to forget”. […]

Cream of local football in my All Star X1

FORMER Lyme Regis Football Club captain Stuart Broom, who has been writing a series on his sporting memories for LymeOnline, choose his all-time starting line-up from those who have played for his hometown club over the years. […]

Homely and humble – heart of the community

IT is getting on for two decades since a large group of us from an east London-based youth football team first descended upon Lyme Regis. […]

LymeOnline ·
@LymeOnlineUK
Adults and children are welcome to join the 'Choir for Christmas', leading up to a performance on December 19th #lymeonline #lymeregis #dorset https://t.co/QSUQDXEJ7C
View on Twitter
0
0