OUR new council administration started its new five-year team this week. The town took to the polls on May 2 to elect 14 councillors from the pool of 16 candidates, with a turnout of 44.56 per cent.

Among those elected are eight existing councillors and six new councillors, creating a good balance between experience and new faces.

The 14 councillors took office on May 6 and have already attended a welcome session to get to know each other and learn the basics. They’ll have a busy couple of weeks as they settle in, including training, attending meetings and making some important decisions.

The first decision they’ll be asked to make will be choosing the next mayor and deputy mayor, which will take place at the annual meeting of the council on Wednesday, May 15. This will be followed by the traditional mayor-making ceremony on either June 5 or 12 – a date the new mayor will decide on – and the civic service on Sunday, June 16.

As part of their induction programme we’ve arranged for West Dorset MP Sir Oliver Letwin to talk to the new members, and we’re also hoping to arrange visits from the police, harbourmaster and leader of Dorset Council. Training will include equality and diversity, finance and the planning system.

Councillors will hit the ground running, with lots of issues still outstanding from the last administration, including Henry’s Way play park, the lighting scheme in the gardens and the traffic and transport study.

It’s an exciting time for the council, with many projects underway and others on the horizon, a new group of members to drive us forward, and a new Dorset Council to forge relationships with.

But with success comes failure, and the election has meant we lost two sitting councillors – former deputy mayor Steve Miller and Sean Larcombe. There were four other members who didn’t stand for election – Derek Hallett, Pat Hicks, Owen Lovell and Patrick Ridley.

We would like to thank them all for their service to the town during their term of office and hope we will see them in the public gallery at meetings and other council events, to which all members of the public are of course encouraged to attend.

And so the next term of office begins…

Birds of prey cause media storm

THE birds of prey we enlisted on the seafront to try and scare away seagulls created such a media storm that we’re hoping to bring them back.

The four birds, which included two bald eagles and a Chilean blue eagle, created quite a spectacle when they were in the town during the Easter holidays. They attracted media interest from all over the world, from places as far afield as South Africa, Norway, Australia and Ireland.

The story also featured on the Jeremy Vine Show on BBC Radio 2 and the BBC’s One Show were also interested.

Seagulls see birds of prey as a threat and the council agreed to a trial from Xtreme Falconry to find out if it really works. The birds were certainly successful in driving away the seagulls while they were here, but inevitably they did return, and the feedback from residents and visitors has been largely positive.

If nothing else, people were amazed to see these magnificent birds up close and it’s generated a huge amount of publicity for Lyme Regis.

We’re now considering inviting Xtreme Falconry back on several occasions in the summer, and this is something the new administration will be asked to think about in its first few weeks. 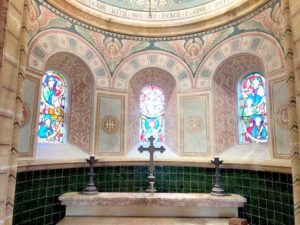 THE interior of the chapel in the town cemetery has been given a new lease of life. The decorative paintings on the walls of the Church of England chapel have been painstakingly restored, and we’re thrilled with the results.

After cracks in the lime plaster were filled in, conservation artists had the difficult job of cleaning and repairing the stencils inside the chapel, which was built in the 1850s. The artists described it as an ‘interesting technical challenge, but enjoyable’.

The chapel was in need of some attention, and repairs have also been made to the roof, but more extensive work to repair rotten battens and re-tile it will take place next year.

The chapel is sometimes used for funerals and in the last couple of years has been open to the public on Heritage Open Days, which take place every September.

The council considered several designs for the park and had narrowed it down to two, but after listening to residents, new designs have been commissioned.

Concerns included overlooking into neighbouring properties from high equipment, the older age group the new equipment might attract, and the safety of children using the park.

We have now decided to seek new designs for ‘toddler’ equipment at a much lower cost than the original proposals.

As a significant proportion of the funding was coming from the former West Dorset District Council through section 106 funding, it is hoped any remaining funds could be spent on further improving the Anning Road play area.

YOU may have glanced at the Millennium Clock recently and thought you were running late. The clock in Cobb Gate car park is running 10 to 15 minutes behind but we’re doing everything we can to right it.

A brand-new clock head was installed last year and it was running perfectly at first but has recently had some issues, including power failures, the clock stopping completely, and now running behind time.

But the clock isn’t running slow – following a power failure, it has re-set itself at the wrong time and we now have to manually re-set it. 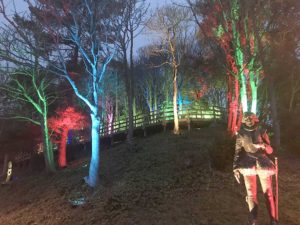 Gardens to be lit up in June

THE lighting project in the seafront gardens is expected to be launched at the end of June.

The project will involve illuminating key features and pathways in and around the woodland walk with coloured lights. Preparatory works start next week, with over 60 lights to be installed.

We’ll announce the switch-on date closer to the time.

We’re looking for a gardener to join our team. The head gardener role has been replaced by a gardener post and we’re hoping to fill the vacancy in time for the summer. For more details about the role and how to apply, click here.

Time for Lyme to appoint a dedicated dog warden

GREAT angst among the dog lovers of Lyme over the Bank Holiday period concerning the number of pets left in locked cars during the sweltering temperatures. […]