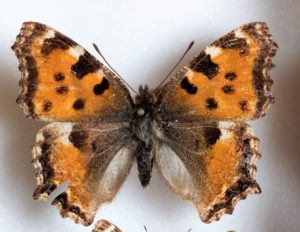 IN a new, monthly blog for LymeOnline, Lyme Regis Museum will be showcasing its wide variety of items and artefacts on display, starting this month with its collection of butterflies and moths.

THE Victorian era was an age of collecting; also an age of enquiry. It was a time when many, often clergymen, collected butterflies and moths.

How fortunate from a scientific viewpoint it was. It was an age of discovery, as well as an era of acquisition.

Lyme Regis Museum has a three cases containing butterflies, some European, some Asian. For the curious, one case is on display with a few European and many Asian.

Of the dozen or so European butterflies it appears they were collected in Belgium and France in the 1880s. There is a swallow tail and a scarce swallow tail. Those travelling in Europe will be familiar with both, the former still to be seen, just, in the fens of Norfolk – ours is distinct from the continental examples.

There are two interesting specimens of the map butterfly found in northern Europe, exhibiting different forms – one for spring and one for summer. In the 1920s someone tried to establish a colony in the Forest of Dean but the experiment did not last more than a year or two.

Then there is a specimen of the black-veined white which became extinct in Kent in the early twentieth century.

Finally, there are specimens of two species of copper butterfly. Were these resident in Britain in the distant past? Take a look at some medieval paintings.

Collecting butterflies and moths is frowned upon in some quarters today, but it has an important scientific role; so we must be thankful for the Victorians and their collecting zeal.

Looking after collections of insects is not easy and calls for expertise, but for future scientific enquiry they will prove invaluable.

Lurking among many family possessions maybe there are cases or cabinets. It is important to safeguard these and generations inheriting a cabinet may not know what to do with them. Whilst museums lack space, nevertheless they can offer advice.

So the curious can see a small butterfly display in the museum. Who knows, a youngster, as the writer, can be inspired by just being curious.

THE impact of the 1914-18 World War was to have long lasting social and economic consequences.  […]

Cherry trees to be planted for VE Day commemorations

A ROW of ornamental cherry trees will be planted in the Anning Road playing field in Lyme Regis, as part of commemorations marking the 75th anniversary of Victory in Europe (VE) Day. […]